Mary and a pen

Mary received her shoebox at age 10 in a part of the former Soviet Union. 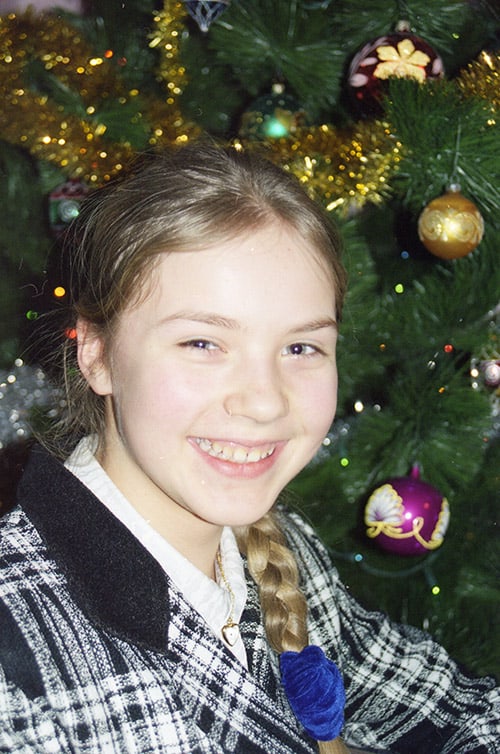 The pastor opened the sanctuary doors, and we peeked in and saw these beautifully wrapped boxes on stage. We couldn’t believe our eyes. We asked if the gifts were for us, and the pastor said yes. I set my eyes on one particular box that seemed to be the prettiest, and I was really hoping it wouldn’t be picked before my turn came.

When it was my turn, I ran toward that box. The box itself was a gift because it was so beautifully wrapped. The box had a lid that was attached and opened up—I loved it. I used it for many years as my treasure chest.

One of the items I loved most in my box was a pen in the shape of a lizard. Being able to have a special pen to take with me to school was great. In my family, we got the cheapest of the cheapest pens. My family lived modestly. I was born and raised in a big city. We lived in a communal apartment and food was very simple. Everything was very modest.

I became a believer when I was 10 years old, the same year I received the shoebox. I would tell my friends at school about my faith because I wanted them to experience the joy I had. Some of my friends weren’t too crazy about it. They told their families whose perception of Christians came from the Soviet era and its propaganda and lies about Christians. Their parents were really scared that their kids were hanging out with me.

After about a month, even the friends I thought were my best friends wouldn’t talk to me. They decided they didn’t want to be friends with me.

As a new believer in Jesus, I was greatly encouraged by the love shown through the shoebox gift. It reminded me of the greatest gift of love that Jesus displayed by dying on the cross for my sins and being raised on the third day to conquer death.

As I went through the contents of the box I came across a photo of the family that sent the box. I couldn’t believe a family somewhere on the other side of the world would want to give me something and not even know who I was.

Inspired by the generosity of this family, I shared some items from my box with people at school. I told them the gifts came from people who were Christians and loved them and loved Jesus.

“Inspired by the generosity of this family, I shared some items from my box.”

I came to America when I started college, and the church I attended participated in Operation Christmas Child. I packed boxes there, and when I got married a few years later, my husband and I began packing gifts together.

It’s fun to now pack boxes with my kids. Shoebox gifts are a tangible way for kids to see God’s love. When they hear about His love, they can understand it because they can feel it and touch it.