Alina and a music box

When I was just over a year old, doctors told my mother that I would never be able to walk. Not knowing how to care for me, my mother left me in a hospital. Thanks to doctors and nurses who did not give up on me, I began to walk and was placed in an orphanage when I was 3 years old.

On a cold day nine years later, I noticed other kids in the orphanage carrying shoeboxes. I was very curious what was inside them! So I got in the back of a long line and could hardly wait my turn. I was one of the last ones to receive a shoebox.

When I finally had one in my hands, my teacher told us that we had to wait to open them until we were back in our classroom. That meant a seven-minute walk up five flights of stairs. I couldn’t wait that long! I tried to peak inside my box, but my teacher said, “Nope! Close it! We all need to go to the class.”

When I finally got there and opened it, the first thing I saw was a little round, white music box that played Christmas music. I liked it because I could put it in my hat, hiding it from the other orphans who beat kids and checked their pockets in order to take things from them.

When I tucked the music box in the fold of my winter hat, it played music in my ear. I remember kids watching me while I bounced along to the music. They heard the noise, but didn’t see me carrying anything. 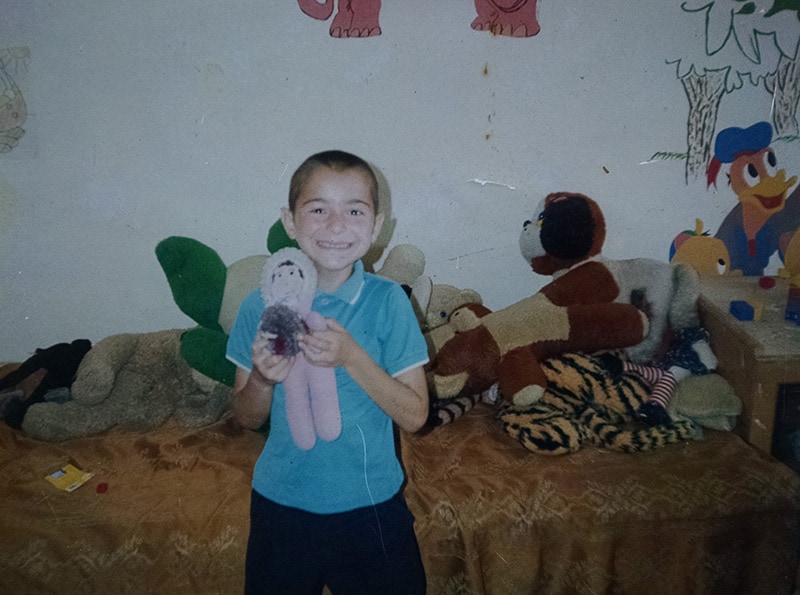 Eventually, though, I became careless and an older girl heard the music. She asked what it was and I had to show her. I begged, “Look, you can take whatever you want from my shoebox, but don’t take this away from me.”

But she took it, stepped on it, and broke it. I was so mad at her for ruining my new happiness— the music box was mine for two days at the most.

The other thing in my box that I especially liked was a Lego man. I liked him because he also was little and I could hide him. I tried not to play with him except when I was by myself, so people wouldn’t see him.

But when I took the Lego man out to play with another orphan, an older girl saw it. The next thing I knew, five older girls ganged up on me and took him. I cried because he was my imaginary person. I had him for about a month.

Even though I no longer had these toys, my shoebox gift meant I was special. I was loved. It meant someone cared for me.

“My shoebox gift meant I was special. I was loved. It meant someone cared for me.”

That same year, I attended a camp where they talked about Jesus. I had heard about God, but didn’t really know who He is. I imagined a huge man with a white beard sitting in a big arm chair looking down at people as little ants.

But a woman gave me a New Testament and explained that I could ask Jesus into my heart. She said I could talk to Him at any time. This meant a lot to me because I talked to myself often—not aloud, but in my thoughts.

Now I knew someone would hear me whether I was sad, happy, or even had questions. The woman told me that God could be my best friend, brother, and even my parent. I thought, Now I can have a best friend with me no matter what!

When I got back to the orphanage, people saw a change in me. I had Jesus in my heart. No one could take that away from me!

Years later, I had an opportunity to come to the United States to do some translation work for missionaries who had served in Romania. I met my husband and now we have a baby girl. I can’t wait to pack shoeboxes with her one day.