You can help provide safe water for generations

Life, hope, and a future for millions.

When we tell Fanu Tafer she owns one of the oldest BioSand Water Filters in all of Africa, the news prompts only a slight smile.

Rather than talk about her filter’s age (20+ years) and low-cost durability, Fanu would rather talk about its profoundly beneficial impact on her family’s health.

The Ethiopian woman says before they received a BioSand Filter from Samaritan’s Purse Canada in 1999, they suffered monthly from typhoid fever or other diarrheal diseases caused by unsafe drinking water. 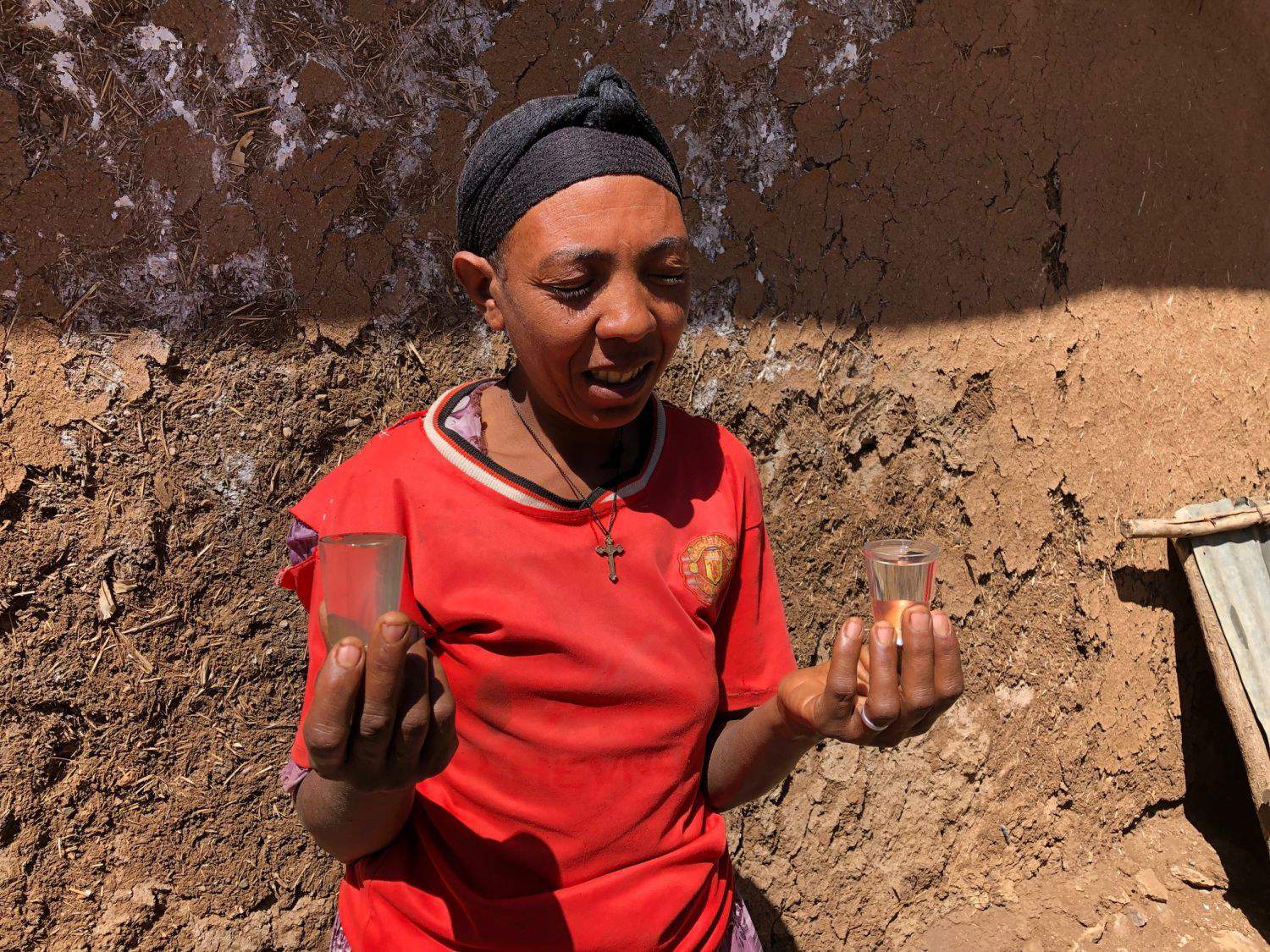 Fanu Tafer holding glasses of water: before and after being filtered.

“I was at the point of death one time,” Fanu recalls. She had to be rushed to the nearest hospital.

There was another frightening incident when her husband was so weak with diarrhea that he collapsed while tending the family’s corn crop. Neighbors carried him home.

“The water from it is so safe. It’s the way I grew up. It raised me.” —Frealem Eshetu

Fanu, now 40, was often fearful that one or more of her three children would die from the water they gathered at a nearby lake. Each new round of diarrhea forced the children to miss valuable school time.

Then Samaritan’s Purse arrived in her community. Funded by generous Canadians like you, we offered to build concrete filters for as many households as possible. Fanu accepted our offer, and in the years since her family received their filter, “we have never experienced diseases from the water,” she says. 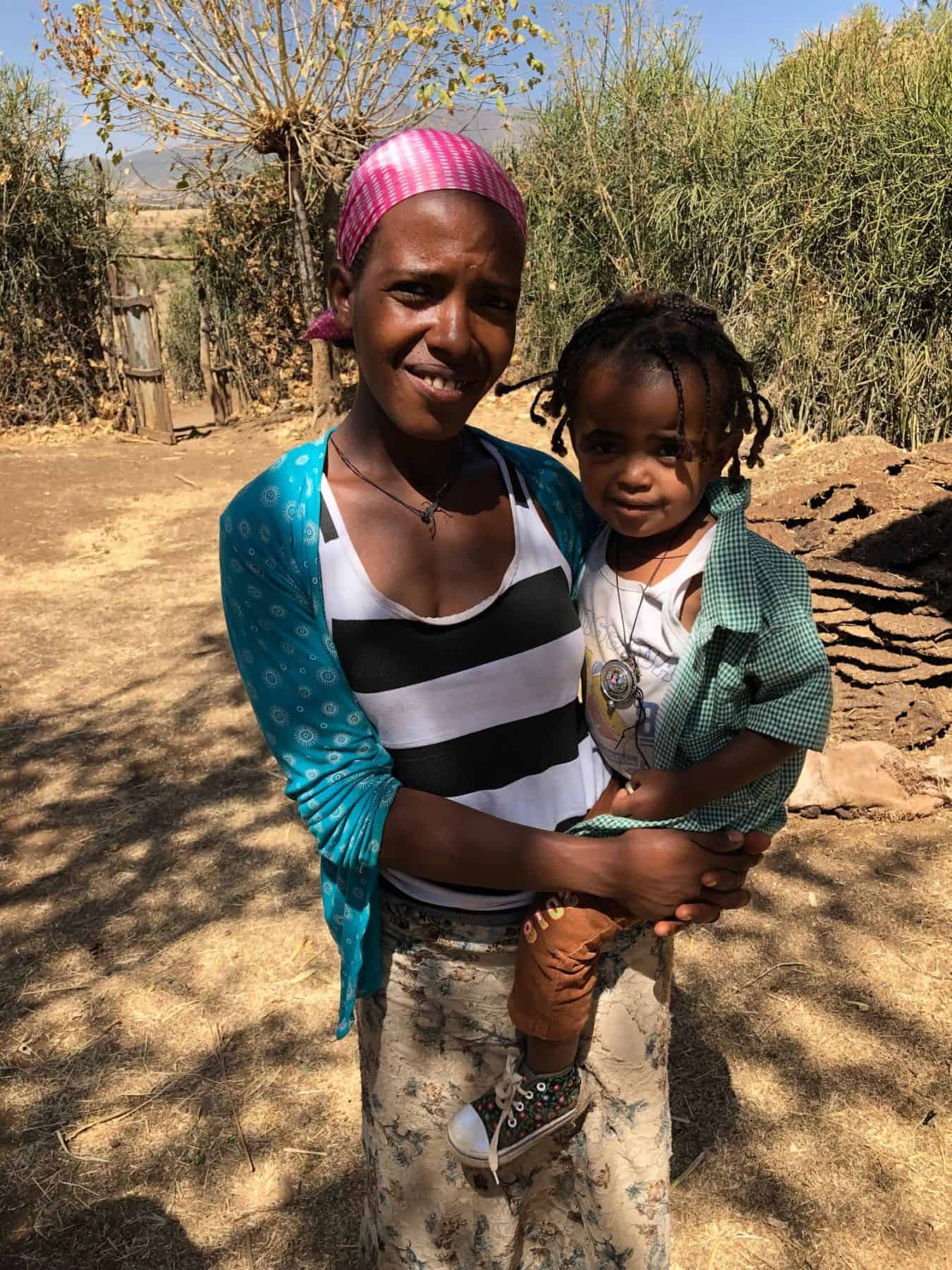 Frealem Eshetu holds her young daughter, the third generation in her family to benefit from the same 20-year-old BioSand Filter.

Many of the families in Fanu’s region—about a 90-minute drive from Ethiopia’s capital city of Addis Ababa—now get water from a nearby pipeline. She and her family don’t live close enough to the line, so they still fill and carry plastic jerry cans with water from the lake where cattle drink and defecate.

Fanu says even if they could receive water from the pipeline, she would still pour it through the layers of purifying sand and gravel inside her filter. “Until I die, I will not stop using it,” she insists.

Her married daughter, Frealem Eshetu, has an equally strong attachment to the modest-looking concrete box. She tell us: “The water from it is so safe. It’s the way I grew up. It raised me.”

“I won’t drink water if it hasn’t been filtered”

Frealem’s brother Zerihtin was too young to remember the sickness his family experienced before getting their BioSand Filter. But he remembers getting sick from drinking water at other people’s homes with no filter: “I have that fear (of getting sick again) so I won’t drink water if it hasn’t been filtered.”

Zerihtin adds: “I am very grateful for our filter but I know many other people all over Ethiopia and in other countries still need them. And so I wish they could have them too.”

Before we leave Fanu’s home, we pray that God will grant her family more good health. They, in turn, promise to pray that Samaritan’s Purse will have the resources to continue building BioSand Filters in many parts of the world where they’re needed just as desperately as Fanu’s family needed one.

This video shows the effort that Fanu Tafera must invest each day in gathering dirty water from a nearby lake, then carrying it home before her BioSand Filter transform it into safe, drinkable water for Fanu and her family.

She’s been making the same daily trek for decades – and is very thankful for her BioSand Filter that’s been cleaning that water for the past 20 years. 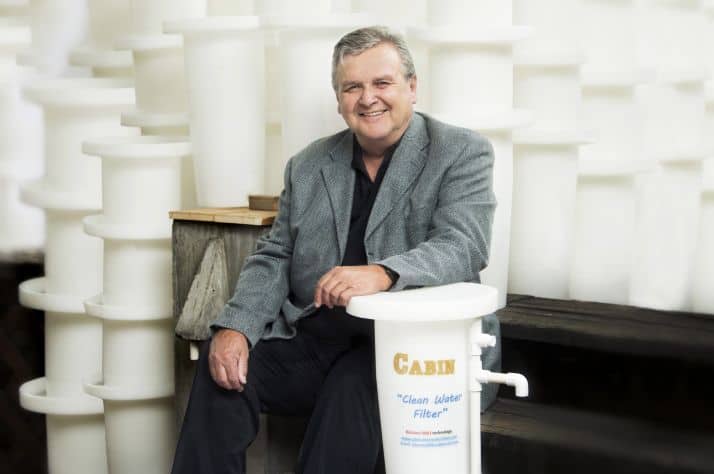 Dr. David Manz designed the BioSand Water Filter, which has been tested and proven effective by various experts including the World Health Organization. The filters have no moving parts to wear out, and operate for decades with little or no maintenance.

When Dr. David Manz invented BioSand Water Filters in 1994, he offered the technology to non-profit groups willing to use it to help in the developing world. That’s where someone—often a child—is dying every 37.5 seconds from diarrheal diseases caused by poor water quality and hygiene.

Samaritan’s Purse accepted David’s offer. We tested the technology, confirmed it could turn dirty water into safe water in minutes, then arranged for the construction of 12 steel molds from which concrete filters could be formed. We sent the molds to several countries where we and our local Christian partners began building filters. One of the countries was Ethiopia, where we’ve now built 32,000 filters.

Worldwide, thanks be to God and to donors like you, we have built enough household BioSand Filters and larger-scale Samaritan’s Filters for schools and small communities to help almost 1.7 million people. But the urgent need for more filters continues, so please join us through your donations and prayers.

Your gift will help those who have no choice but dirty water, like those living in Ethiopia, and will be used to provide a variety of water solutions and toilet facilities. Your gift will also train local church leaders to educate communities in good hygiene and sanitation practices, whilst sharing the Good News of Jesus Christ.

Once
Monthly
$25
Can provide safe water to a child who gets sick from drinking dirty water.
$150
Can provide 1 BioSand Filter for 1 family.
$500
Make a big impact and give to Samaritan's Purse Water Projects.