We ask for your prayers for Syrian refugees 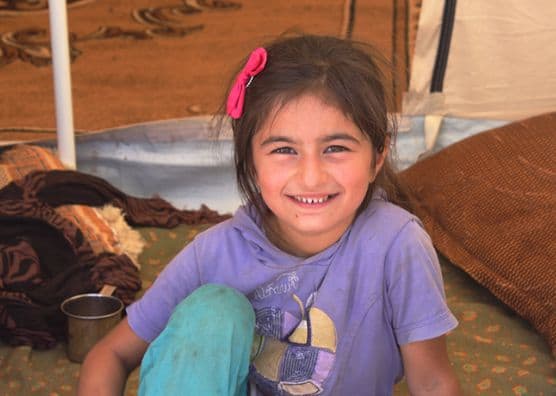 Visits with Syrian refugee families give a Samaritan’s Purse staff member a window into the lives of thousands uprooted by violence.

October, 2014—Ammed has lived in a makeshift refugee camp for two years. Like everyone who has fled the violence in Syria, he has a story to tell. His father, brother, and sister were killed in a missile attack that hit their home. He decided he needed to get his wife and four children to safety.

It took them three days to walk over the mountains and cross the border into another country. Ammed is able to find work a few days a week, but it’s not enough to support his family. His 12-year-old daughter works full-time in the nearby vegetable farms for  about $4 a day. There are rumors of sexual abuse and even trafficking of girls to the city brothels or to other countries, but she has been safe so far.

Ammed has managed to get a stove and bedding. He has lined the walls of their home with blankets for coolness in summer and heat in winter. He purchased some cement and made a floor to stop worms from crawling up into the bedding. His landlord is using his rent money and that of the other 109 displaced families living in his field to build a new house. It is almost finished, so he has evicted them all, including Ammed’s family, as of November. They will have to move and start all over. Again.

At the end of our conversation, we asked if we could pray for them in the Name of Jesus. Ammed said, “Your god is a god of peace and love, so we welcome your prayers.”

In a different district, we visited a young boy who received a kidney transplant six months ago. A testimony to their sense of compassion, this Syrian refugee community raised the $20,000 needed for his surgery over about one year. He is doing well. Several families gather as we chat with him. They report death threats and bird hunters taking potshots at them when they ride their motorcycles.

Every family I’ve met has a story of injustice, violence, and grief that most of us will hopefully never have to experience. But what strikes me is that the story is ongoing—a sort of slow-motion nightmare. Although these families have reached relative safety outside Syria as refugees, they still face threats from unhappy local populations.

We can do more, we simply must.

I came across this quote from an ancient Greek historian, Thucydides, writing before the time of Christ. It goes something like: “The question of justice arises only between parties of equal strength, and the strong do what they can and the weak suffer what they must.” Solomon, who wrote the book of Ecclesiastes an estimated 3,000 years ago, was right, “there is nothing new under the sun” (Ecclesiastes 1:9b, ESV).

Read about what Samaritans Purse is doing to help Syrian refugees.