Warm coats given to Syrian refugees in northern Iraq 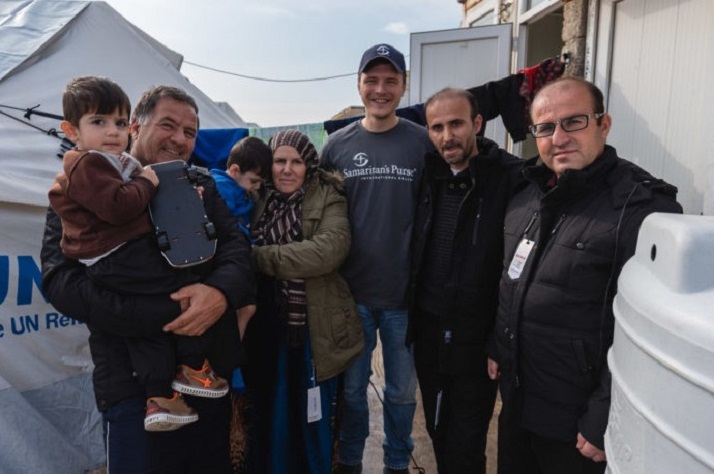 Sabal* pulled a tissue out from his pocket and patted his eyes several times, trying to prevent more tears from slipping out. He paused, then took a breath, and was eventually able to continue on with his story of how his family escaped Syria two months ago after Turkey’s incursion along the border.

Sabal, his wife Nina, and his 24-year-old son fled immediately, with no time to gather up a few essentials such as passports and money. Sabal explained that this is the second time the family has been forced to leave Syria due to war and violence, and despair has finally taken over.

Sabal and his family received warm coats from Samaritan’s Purse.

“We have no hope of going home. I hate my life. I have nothing to live for.”

Samaritan’s Purse staff met Sabal during a recent winter clothing distribution in Bardarash refugee camp in northern Iraq. Sabal is among thousands of Syrian refugees in the camp who have received warm coats from our teams. We also distributed boots and socks to all the children in Bardarash.

These winter items are much needed as temperatures should soon drop below freezing in the area, and the refugees have come to Bardarash with very little. Many of the clothing items we distributed were airlifted to Iraq aboard the Samaritan’s Purse DC-8 aircraft.

Our aircraft also transported urgently needed supplies for displaced families in northeast Syria. We then worked with local partners to send several convoys of trucks from Iraq into Syria that carried the relief supplies, such as blankets, sleeping mats, cooking kits, tents, and water filters.

Samaritan’s Purse teams are sharing God’s love and peace to people who so desperately need it—people like Sabal, who carry with them tremendous grief. One of Sabal’s sons was killed by ISIS. Another son was burned so badly during war he had to leave Syria in order to seek medical care.

“We have no hope of going home. I have nothing to live for.”

And the son who came with Sabal and Nina to Bardarash is traumatized to the point that he rarely speaks. “I want to cure my son only. I want nothing for me,” Sabal said.

Sabal expressed thanks to Samaritan’s Purse for the winter coats and for treating him and his family with kindness and compassion during such a painful time.

“Thank you for seeing us as human beings.”

Nebez and his family also received winter coats and his grandchildren now have warm boots and socks.

“The winter is going to be very cold,” Nebez said. “We appreciate your help.”

Nebez cannot walk and had to be carried across the border by his family in a blanket.

Nebez is paralyzed, and family members had to carry him away from his home in a blanket in order to survive. “The military started bombing our houses and killing my people,” he explained. “My house and my shop both got burned. I left everything.”

In the chaos and panic of trying to flee, Nebez was separated from his 19-year-old son. “I don’t know where he is, if he’s alive or not. I lost him. I have no idea where my son is.”

Life in a refugee camp is especially challenging for someone who is paralyzed. “I walk, I fall down. I try to take a bath, I fall down,” he said. “I have been here almost two months and only bathed once. The water is very cold.”

Nebez also struggles to provide for his family—which includes his wife, daughter-in-law, his two daughters, and seven grandchildren—in the camp. They have little money left after paying people to smuggle them across the border.

Nebez’s daughter-in-law and his granddaughter received a coat and boots from Samaritan’s Purse.

“I am an old man—it’s fine for me to not have food every day. But what about this infant?” he said, pointing to his youngest grandchild who is only two months old. “It’s not about me, it’s about my family.”

Sera is also worried about her family living in the camp, especially her son Coban, who is 3-years-old and unable to talk or walk. Coban can’t hold his head up or sit on his own, so Sera has to stay with him at night. “I don’t care if I sleep or not, but I have to take care of my son.”

Sera and her husband spent $500 in order for them to cross the border into northern Iraq with Coban and his younger brother. They had to walk for four hours in the middle of the night to reach the border, carrying their young sons the entire way.

Sera provides much care and love to her son, who is physically and mentally disabled.

The family fled in such a hurry they brought nothing with them, not even shoes or clothes.

But what weighs on Sera’s mind the most is Coban and what kind of future he will face. “The hardest thing for me is when I see other kids walking and my son cannot walk.”

Sera and her family were grateful to receive coats from Samaritan’s Purse to help keep them warm during the harsh winter months. They welcomed our staff and thanked them for coming to Bardarash.

Please pray for Sera and other mothers in the refugee camp who are trying to take care of their children. Pray for Nebez and Sabal and the many parents who have suffered so much loss and continue to press on for the sake of their families.

*Names have been changed for security.