From 630 CHEK News: Victoria nurse gives back by helping in other parts of the world 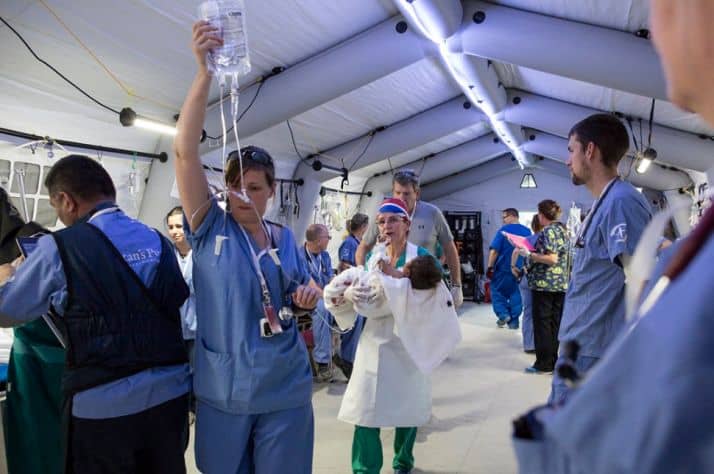 “I remember walking around the field hospital thinking, ‘this is exactly where I want to be right now,'” says 25 year old nurse Katherine Hensman.

Hensman is thinking back to her first deployment with Samaritan’s Purse, when she was just one year into her nursing career.

She was sent to Equador after the 2016 earthquake.

“We deployed to a city where their hospital had been completely demolished by the earthquake, and so while they had medical staff, they didn’t have anywhere for the medical staff to work.”

“Most people have heard of them because they run Operation Christmas Child, where they collect shoeboxes and ship them to needy people overseas,” Potts said.

“I work on a disaster assistance response team that deploys to disasters internationally and provides medical aid and food, and supplies and shelter,” says Hensman.

Hensman has been on four missions, including two to Iraq. Her first deployment there was on Dec. 29, 2016.

“We were about 20 kilometers from an active war zone, so most days we were listening to a lot of bombing…we would hear the bombs in the morning, and then in the afternoon, our patients would come with injuries from those bombing attacks,” says Hensman.

“She has a real heart for it. She’s patient, and she learns unusual things rapidly. I think she learns faster than any other nurse I’ve ever met” says Potts.

Hensman’s most recent deployment was to Bangladesh, treating Rohingya refugees from Myanmar.

“They’re living in refugee camps that are overcrowded and definitely lacking in resources,” says Hensman, who also works in Victoria when not overseas.

“I work at the Royal Jubilee Hospital. I kinda just show up for a few weeks at a time, and work there, and then I go overseas again.”

For Hensman, while she enjoys nursing and living in Victoria, her work with Samaritan’s Purse is a calling.

“I think for anybody who reads news stories, and looks at them and says, ‘I just want to go and I want to do something about that’ then they absolutely should if they can. It’s the most rewarding work, to me, that I’ve ever done in my life.”