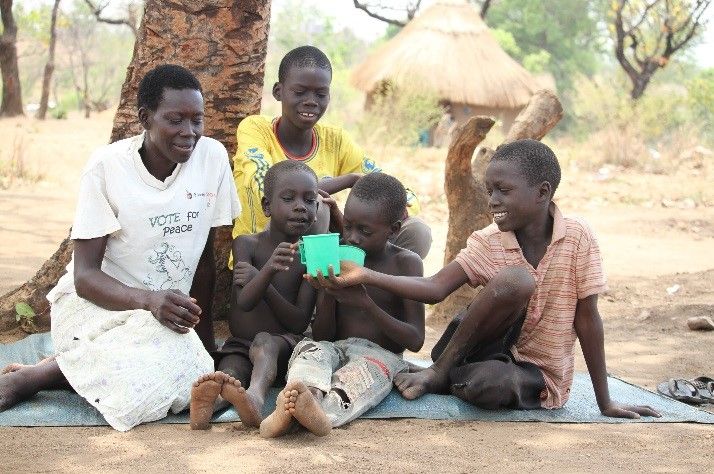 Violence and conflict in South Sudan continues to drive refugees to seek safety in the borders of Uganda.

Africa’s refugee crisis is growing rapidly as a civil war and famine in South Sudan have forced more than 1.6 million people so far to flee. At least 885,000 are now in Uganda, and about 2,000 more are arriving every day.

Uganda’s Bidibidi Refugee Settlement is now the largest in the world, housing 272,000 people from South Sudan. The nearby Imvepi Refugee Settlement has another 60,000. Samaritan’s Purse is busy in both settlements. We’re drilling deep borehole water wells, building communal and household latrines, and providing seeds and agriculture tools. 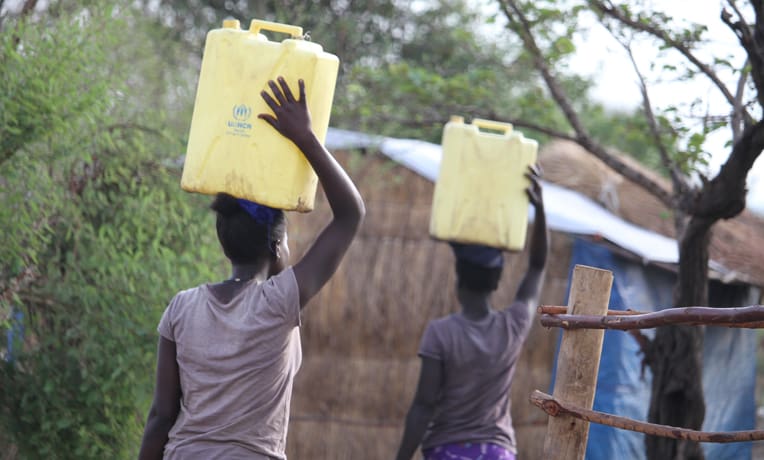 Water is a constant need in the refugee settlement camps. Women are often in charge of gathering water.

A Farmer Once Again

Modo Alex Kenyi, a young husband, father and South Sudanese refugee, is establishing roots in his new home in a country and in circumstances that are unfamiliar and overwhelming.

Yet he faithfully planted and tended the sweet potato vines, maize, and bean seeds he was given by Samaritan’s Purse in the world’s largest refugee settlement in Uganda. 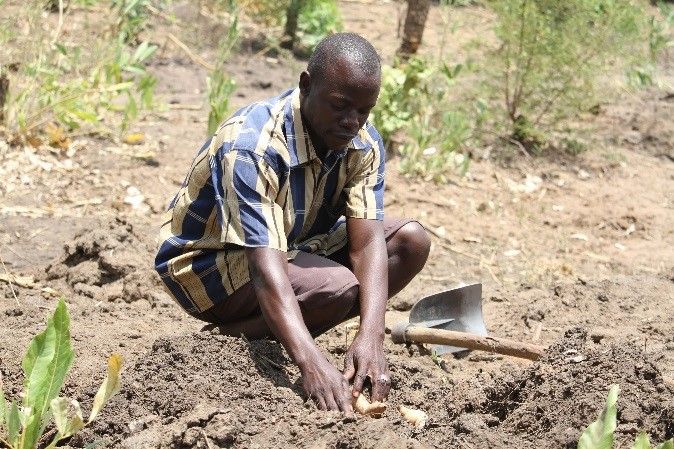 Modo Alex Kenyi plants the seeds and vines he was given by Samaritan’s Purse as he settles into what is now the world’s largest refugee settlement in the world. Kenyi made the perilous journey from South Sudan into Uganda with his wife and four children.

“I was able to harvest the maize,” says Kenyi, a 28-year-old husband and father who was forced to flee his famine-stricken homeland. “My children were happy to eat freshly roasted maize. The harvest helped us for some time, and we never missed a meal.”

Samaritan’s Purse gave Kenyi seeds and tools to cultivate the small plot of land he received after he arrived.

And while not all of his seeds grew in the unusually dry conditions, some did, and it was enough to change life for his family.

Kenyi believes his ability to grow nutritious food helped protect his family against illnesses and strengthened his home in other ways as well.

“When our bodies are strong, malaria will not get us down, and we will not have to spend money to buy medicine,” he says. “When there is food in the home, we don’t fight. There is peace in the home because we have enough to eat. I did not spend money on buying supplementary food since I had it in the garden, so I saved some money.” 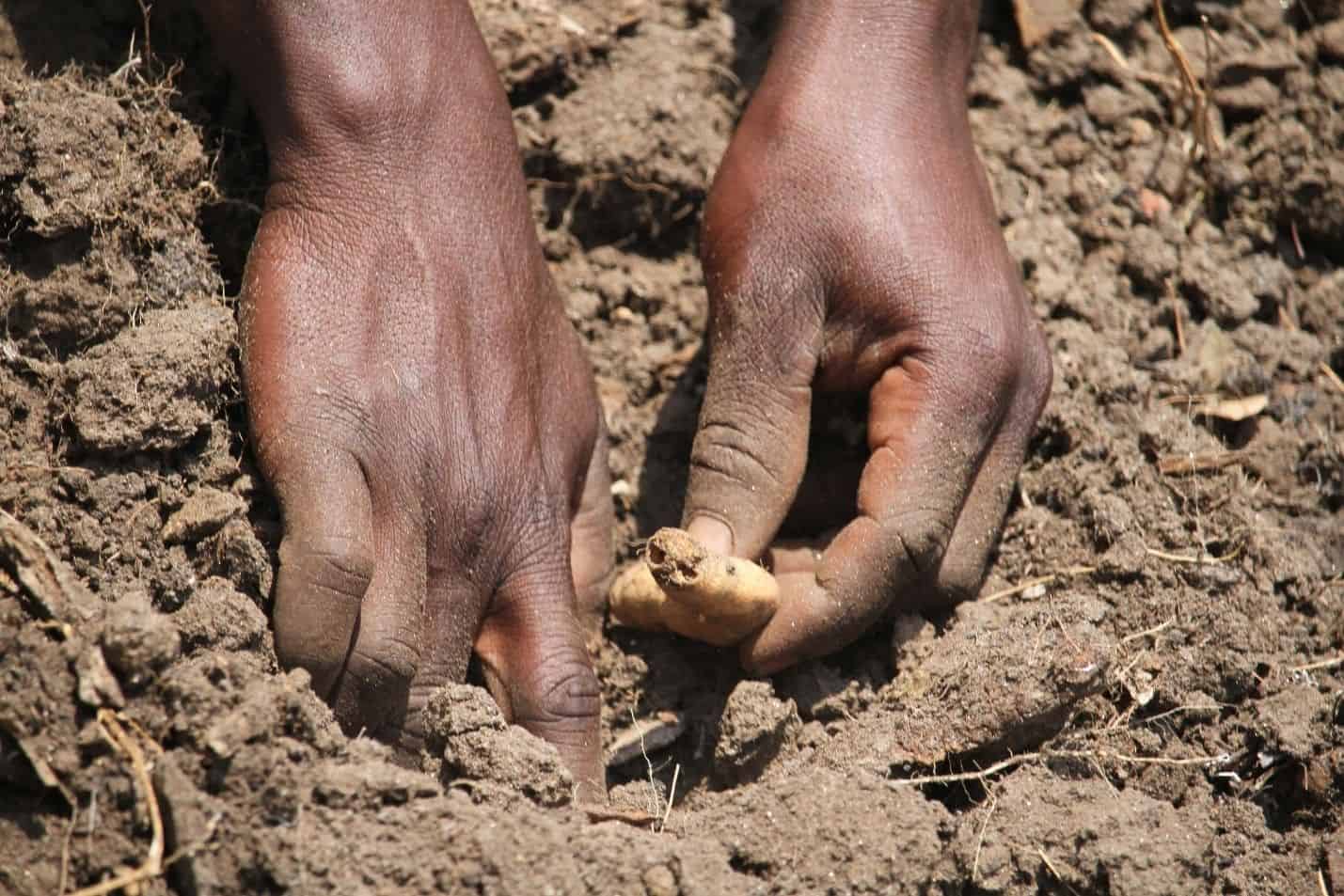 For newly arriving families in Uganda, which is now home to about 800,000 South Sudanese refugees, plants, seeds and farming tools offer a means to grow food, earn an income and start building a new life.

Kenyi has already set aside some seeds to plant in the next growing season.

Thanks to the generous contributions of donors, Samaritan’s Purse Canada will be assisting even more South Sudanese refugees in Bidibidi providing equipment for and training to help refugee families grow food, fish and earn incomes. We will also be drilling water wells and providing access to sanitation facilities.

These projects are increasingly important to the wellbeing of the multitudes of children in settlements as the UN reports that more than 85 per cent of the refugees arriving in Uganda are women and children—mostly children, some unaccompanied.

South Sudanese refugee, 28-year-old Mary Joro, already has eight children in her care—four of them are her biological children while the other four are nephews and nieces.

She says access to water, provided by Samaritan’s Purse, has been a lifeline for her family.

“Since I live near the borehole (water well), I was able to water my vegetables and they grew well,” she says. “It made a difference. It was nice to eat garden fresh food. We enjoyed our meals.”

Please pray for the millions impacted by the crisis in East Africa, and consider making a donation to help give families like Kenyi’s and Joro’s an opportunity to provide for their children and build new lives.