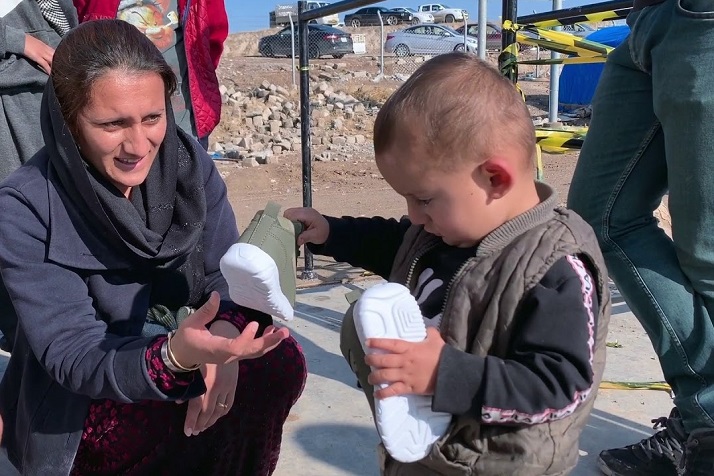 In the midst of darkness and chaos, Ariya* and her terrified family fled Syria after Turkey’s October incursion along the border. She gave nearly all the money she had so that they could be smuggled into northern Iraq in the back of a truck. 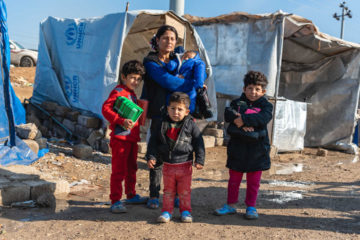 Ariya and her children received warm clothing and shoes as winter approaches.

“It was very tiring and undignified,” Ariya said. “My children were scared because the smugglers kept saying ‘Be quiet!’ and ‘Don’t make any noise!’”

Ariya was in one truck, her two sons were in one truck, and her two daughters were forced to go in another. She felt suffocated by anxiety. Ariya had no idea what was going to happen—would she make it across the border? Would her children? If her children made it and she didn’t, who would take care of them?

She cried many tears of relief once they all safely crossed.

“After we passed the border, I kept holding my children.”

For about two weeks they went from one village to another in Iraq, resting during the night in the home of anyone who would welcome them and then moving on in the morning. Ariya had hoped the Turkish invasion—“constant bombardment all day”— would not escalate and she could take her children back home to Syria, but that has not been the case.

Ariya and the children came to Bardarash refugee camp because they had nowhere else to go. They arrived at the camp with nothing, as they fled Syria with only the clothes on their back and the sandals on their feet.

Ariya’s children were four among hundreds to receive warm socks and winter boots during a recent Samaritan’s Purse clothing distribution in Bardarash. With a harsh Iraq winter quickly approaching—temperatures should drop below freezing here soon—these items are much needed in the refugee camp.

“We couldn’t have bought these shoes otherwise. We are very thankful for them,” Ariya said. “Your support is appreciated.”

Many of the clothing items were airlifted to the region aboard the Samaritan’s Purse DC-8 aircraft, including socks, children’s boots, and coats for adults—the latter item to be given out soon. Once all the distributions have been completed, everyone in the camp—more than 10,000 people—will have received at least one clothing item from Samaritan’s Purse.

A Widow Presses On in Iraq

Two years ago, Rona* became a widow with five children to take care of by herself. Her husband died of a heart attack when their youngest child was not even a year old. 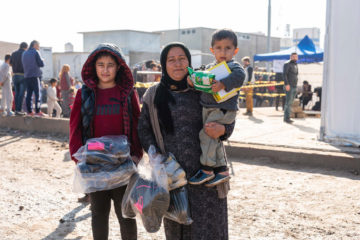 The clothes and shoes provided by Samaritan’s Purse will help Rona and her two sons weather the winter months.

When Rona had to escape the Turkish bombings during the night, she had no other family to come with her to help with the children.

She said the other refugees in the truck transporting them across the border were also panicked. “Everyone was always worried—we had worry in our hearts.”

Away from home, in a refugee camp without family or friends, Rona can never escape the frightening uncertainty of what each day will bring—and how she will endure it alone.

“I have this burden on me and it’s difficult and it’s tiring.”

Rona has no money to buy winter boots for her children, as she had to borrow cash in order for them to be smuggled across the border and is still in debt. She was grateful and relieved when Samaritan’s Purse could help meet this need for her little ones.

“We couldn’t have gotten these shoes,” she said. “We didn’t even have shoes when we arrived. Our neighbors gave us the ones we are wearing.

“Thank you for everything you have provided.”

Hana* knew it was time to run for her life when her neighbor was shot and killed by a sniper. As Hana’s family lives very close to the Turkish border, snipers became such a threat in recent months that at one point her family was forced to stay inside their home for an entire week.

Hana and her children are enjoying their winter clothes.

“Whoever went out would get shot. It was very, very scary,” she said. “We didn’t eat, we didn’t sleep. There was nothing we could do.”

Hana and her eight children were smuggled over the border and arrived in Bardarash camp mid-October. The children only came with sandals, which are hardly substantial enough for the muddy conditions and impending bitter cold. Hana was grateful that they received the socks and boots from Samaritan’s Purse, since she could not have purchased them.

Hana wants the best for her family and her children are her whole world. When they were fleeing Syria, Hana didn’t worry about herself, only about her children. “I just wanted the safety of my children. I didn’t want anything to happen to them.”

Without work, and with most of their money spent on the border crossing, Hana carries a constant burden of responsibility. She said her children ask her daily for money to buy food.

“I just can’t provide,” she said. “Every day, I die a thousand times.”

But Hana smiled and her eyes were bright as she watched her children trying on the boots and walking around outside their tent in their new shoes.

“You gave them moments of joy today.”

*Names have been changed for security.