The victory of the wounded body of Christ 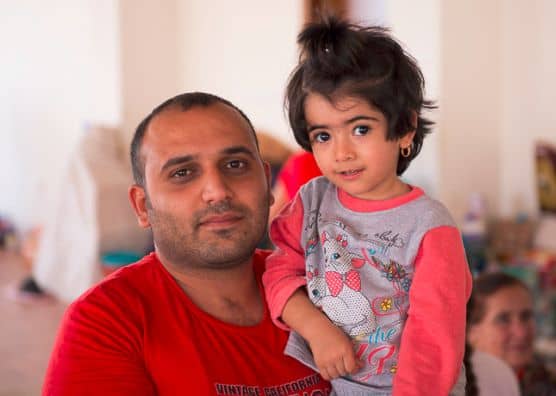 September, 2015—The attacks by the Islamic State (ISIL or ISIS) against Christians and other minorities in Iraq and Syria have redefined extremism. The cruelty and violence of their calculated methods, justified with a warped theology of Allah, are calculated to maximize the shock felt by victims and by the rest of the world. They have effectively used their weapon of fear to force a mass exodus from Syria and Iraq.

There are more than four million registered refugees, millions more undocumented and over 11 million displaced from their homes inside Syria and Iraq. It has been described as an attack on the foundations of global civilization, but we really do not have words that adequately describe our horror at what we see and hear on media.

Although numbered in the thousands, a relative trickle of the most desperate refugees with the means to pay unscrupulous traffickers risk all to escape to Europe.

But one tragic photograph of a small drowned boy finally penetrated the veil of indifference and all but the hardest of hearts. Could more have been done to prevent this? Who is to blame? What is really going on? What should we do to fix this?

If we set aside the geo-political and worldly answers to these questions and re-examine this from the perspective of what we profess to believe as Christians, I think we’ll arrive at a very different response than what the world has to offer.

We believe that our triune God is reclaiming this fallen world from the grip of an Enemy, Satan. We believe that God is building a community of followers, the Church, and that nothing will stand against its advance. Nevertheless the Enemy has a strategy to hold onto this world by attacking and tempting Christians, and thereby destroying the church.

The most recent Middle East violence has successfully driven a majority of Christians to flee for safety and a better life elsewhere including Canada. Who can fault them? None of us would trade places with them.

So, in light of the success of Islamic extremist groups at driving Christian’s from the region is the Enemy really defeating God? What is the future of the church in the Middle East? Does it have a future? In human terms there is plenty of reason to despair. But again and again, we see our sovereign and powerful God at work. He is continuing to build his church in ways that evil cannot stand against.

The wicked fall into pits they have dug themselves. The Islamic State is creating fear but it is also creating powerful and deep revulsion. Millions of people are questioning their faith and looking for new answers. A new chapter in Middle East history is being written.

Therefore, the big question for the rest of the global church outside the region is do we want to participate in the new Kingdom history that God is writing in the Middle East?

First, consider the role of the long suffering and persecuted Syrian and Iraqi churches. If we take the Bible seriously, we believe we are part of the Body of Christ. We believe the unity of that Body is of first importance to drawing others towards Jesus and advancing our calling to be ambassadors of Christ’s Gospel message. We therefore believe that the Syrian and Iraq churches are part of the same Body, the universal church that God has deployed to build His Kingdom.

The violence committed in the past and still being committed against Christians in the Middle East is an egregious assault on the Church. It has inflicted a deep wound on the Body of Christ. If you profess to be a Christian you should be feeling the pain of that wound. If your leg was bleeding and required emergency surgery it would become the priority of your life. You would rush to the hospital.

This is the oldest part of the Body of Christ with roots to the first century and the first apostles. The wound it has received has caused untold suffering for tens of thousands of families,  our brothers and sisters in Christ. We haven’t met them but they are family.

But before we conclude that  this line of reasoning is a guilt trip to manipulate us into action, we need to respond to the unspoken question that the Enemy uses to cause our inaction in the first place. “If God is in control of history why is it going so badly for the church in the Middle East? Why allow all this suffering in the first place?

We believe that when Jesus suffered and died on the cross He actually won a great and eternal victory over Satan—the death of the Son of God on the cross sealed the ultimate defeat of the Enemy and victory for Jesus. Christ crucified and lifted high on the cross is recorded as a moment of immeasurable glory for the triune God drawing others to Him.

When Jesus appeared to His disciples after His resurrection, He showed them the fatal wounds of the crucifixion and invited the doubting Thomas to touch those wounds. At this proof of Christ’s physical resurrection, Thomas cried “My Lord and my God.”

In the same way, the physical wounds inflicted on the persecuted churches in the Middle East will remain forever on the body of Christ to the eternal glory of God. We are not to turn away from those wounds, not to flinch at the painful sight but with Thomas, to approach and touch.

For the Middle East church, we are invited to touch their suffering and share in their pain—from loss of home and possessions, loss of livelihood and means to provide for family, loss of family roots and personal identity and yes, for the loss of loved ones. We cannot fix this and make the pain go away but we can lament and share their suffering because it is our suffering. We mourn with those who mourn.

To avoid that pain and go directly to making it go away, to hide the wound in bandages, is to come up short. Unity of the body is born out of that shared lamentation at what has been done to our Body.

Over four days I stood with God’s remnant in Iraq and listened to (and tried to join with) their songs of praise. I heard them cry from the depth of their hearts in hope that their prayers would be heard. I realized that their praise and prayer must be causing great joy in heaven—that a people who have suffered so much for so long have not abandoned their Lord and their God. I also realized that those cries for help to God are cries that the rest of the Body is meant to hear and that God’s answer to their prayers will come, at least in part, from us.

When I first listened to those songs a few short weeks after these families fled from Mosul area on the Nineveh plain in September 2014, I was amazed at their faith. Looking back I suppose the energy of that worship came from the joy of their near-death escape and literal salvation. A year later, that euphoria has faded. After a year of exhausting struggle to survive one day at a time and start life over, they are tired. They have every reason to blame the God who “let this happen” to them. And yet here they are, still praising and worshipping that very God. And with each session their praise grows louder, as does their determination to stay and rebuild the church of Christ and minister to the lost souls around them.

Like Gideon’s remnant of 300 warriors, they are still waiting on the Lord in hope and trust that the story He is writing with their lives will resound through the endless ages to the eternal glory of God.

Therein lies all the reason we need to join them in the struggle.