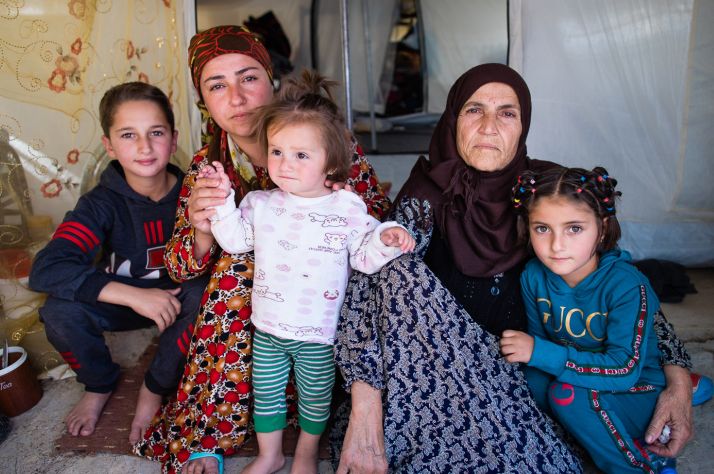 Samaritan’s Purse is delivering relief to those who’ve been displaced by terrible violence.

On Nov. 28, Samaritan’s Purse worked with local partners a relief convoy of 30 trucks from Iraq into Syria with urgently needed supplies for families displaced by recent violence. The vehicles will be carrying 12,000 blankets, 6,000 sleeping mats, 3,600 Sawyer water filters, 1,500 cooking kits, and 800 tents. In addition, the convoy will transport coats, gloves, thermal underwear, and socks for 400 children (ages 2 to 14) and 370 babies (up to 2 years old).

Additional partners will distribute these items at a growing camp for displaced persons located in northeast Syria. The area is home to Kurds, Christians, and Arabs.

Thousands of Syrians fled for their lives as bombs rained down on their homes in mid-October during a Turkish cross-border incursion. More than 65 schools shut down as a result, and the emptied structures became temporary residences for desperate families. Now roughly a month later, Syria is seeking to reopen these schools, so men, women, and children who have been living in them are being relocated to a desert camp—which is where our convoy is headed.

New arrivals will join more than 300 families who are already in the Syrian camp, enduring harsh conditions. Tents are set up in the dirt and mud, and with winter temperatures arriving, living in them is not only messy, but also bone-chilling cold. There is minimal international assistance at this facility, so few services are available.

This delivery is in addition to the 500 tarps, 500 tents, 8,600 blankets, 4,000 sleeping mats, 3,600 hygiene kits, and 1,500 cooking kits Samaritan’s Purse has already delivered to displaced families through our local partners in Syria.

Many of these items were airlifted to the region aboard the Samaritan’s Purse DC-8 aircraft. The plane made two flights to Erbil, Iraq, over the past few weeks.

—–
Samaritan’s Purse is providing emergency relief to Syrian families displaced by Turkey’s recent incursion along the border. The violence has created a humanitarian crisis, displacing more than 100,000 people. Some have crossed the border into northern Iraq while others remain displaced within northeastern Syria.

Samaritan’s Purse is meeting the desperate physical needs of displaced families in both areas—directly aiding refugees in Iraq and offering relief through local partners in northeastern Syria.

Among other places, Samaritan’s Purse disaster response specialists are hard at work in Bardarash, the largest refugee camp for recent Syrian arrivals in northern Iraq. The camp is made up of more than 10,000* people—a mix of men, women, and children, primarily Syrian Kurds—who are living in tents and struggling to care for themselves.


A Pregnant Mother Forced to Flee 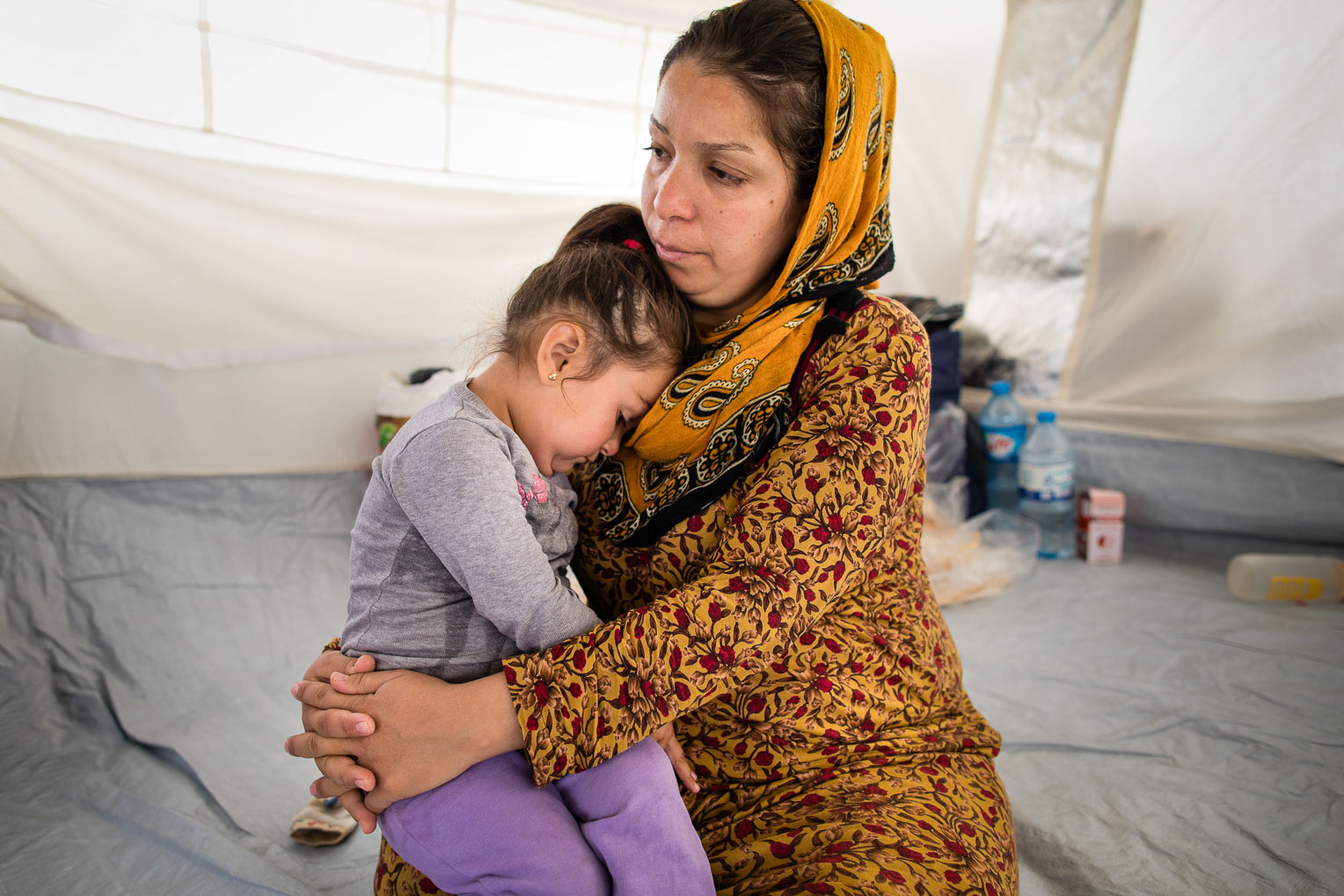 Five months pregnant, Seyda fled Syria for safety along with her 2.5-year-old daughter.

Seyda, five months pregnant and also holding her 2 ½-year-old daughter, said she never wanted to leave her home in Syria. But, when the fighting was just yards away, she had no choice. It was her family’s only hope to survive.

“We were forced to leave,” she said. “Everyone left. It was us, our children, the elderly—everybody left. Everybody had to run away. I felt like I was going to die. I still don’t know how I got here, but I felt like death was near.”

Just months away from delivering her second child, Seyda was exhausted from the journey.

“By the time we got here, we were very tired. It was like torture. We were lost. We were thirsty. We were hungry, and we were exhausted. We lost our dignity.” 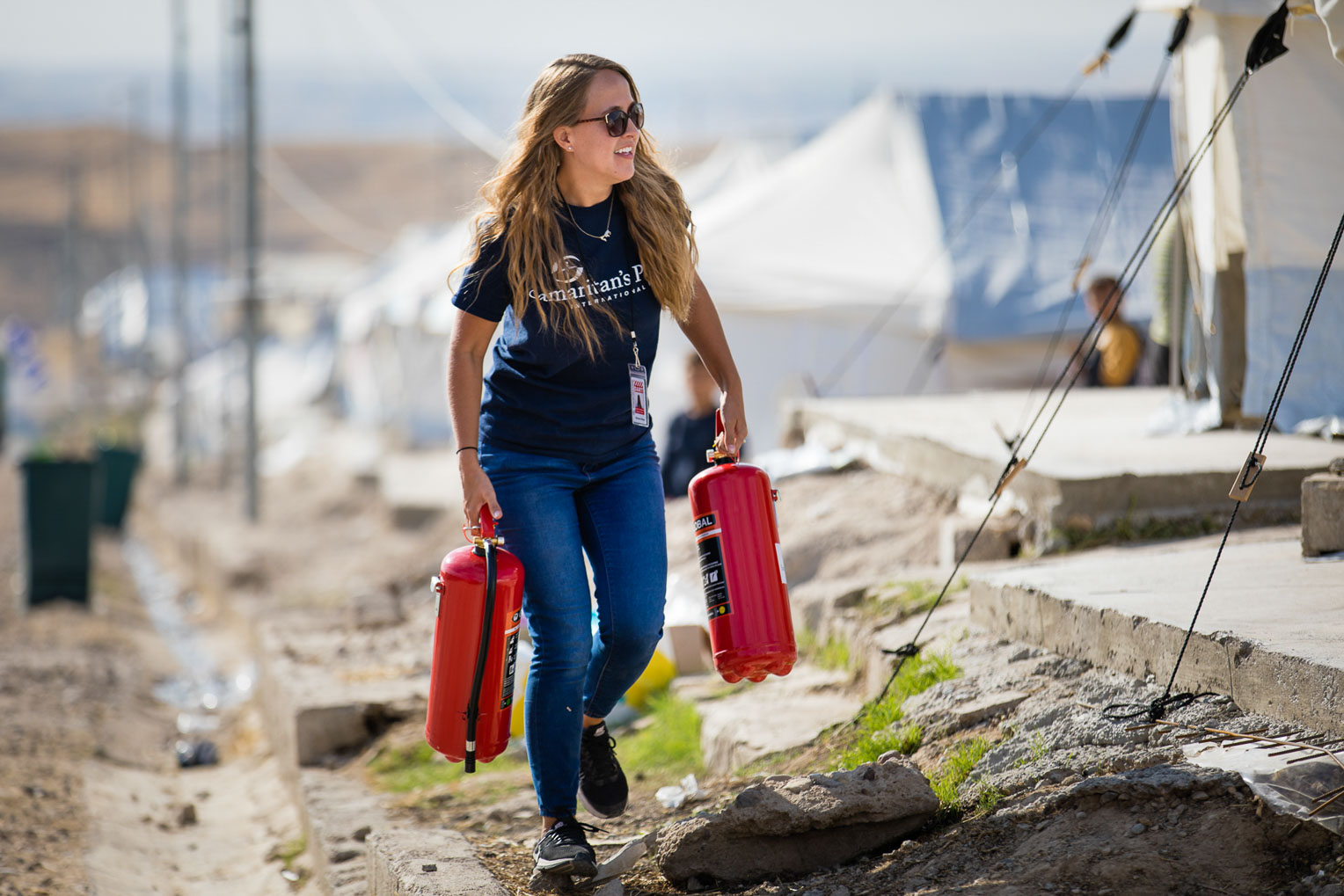 The Samaritan’s Purse team distributed fire extinguishers in Bardarash camp to aid refugee families who cook and heat with kerosene.

The Samaritan’s Purse team met Seyda during a fire extinguisher distribution. As families cook and heat their tents with kerosene, fires have become a common hazard. Several tents have already caught on fire and burned down. After leaving their home country and taking refuge in a tent, this loss is especially devastating—turning what little they had into ashes. Because the tents are highly flammable, there is great concern that one fire could quickly spread and destroy the entire camp. To combat this, Samaritan’s Purse has distributed more than 700 fire extinguishers.

Seyda was extremely grateful for this protection. She gestured toward the tents surrounding her own, and said they are all one—a family united by trauma and hardships. She promised to look out for her neighbors because she knows they will do the same for her.

Seyda still fears for her family’s future, wondering how she will give birth in the camp and raise a newborn in such harsh conditions. Through tears she asked, “How will I keep going like this? My children need me—I just have to find a way to care for them.”

Across the camp, Samaritan’s Purse has rehabilitated 567 latrines and provided 500-liter water tanks, benefiting 1,000 families. These water, sanitation and hygiene interventions help prevent the spread of disease while restoring dignity. 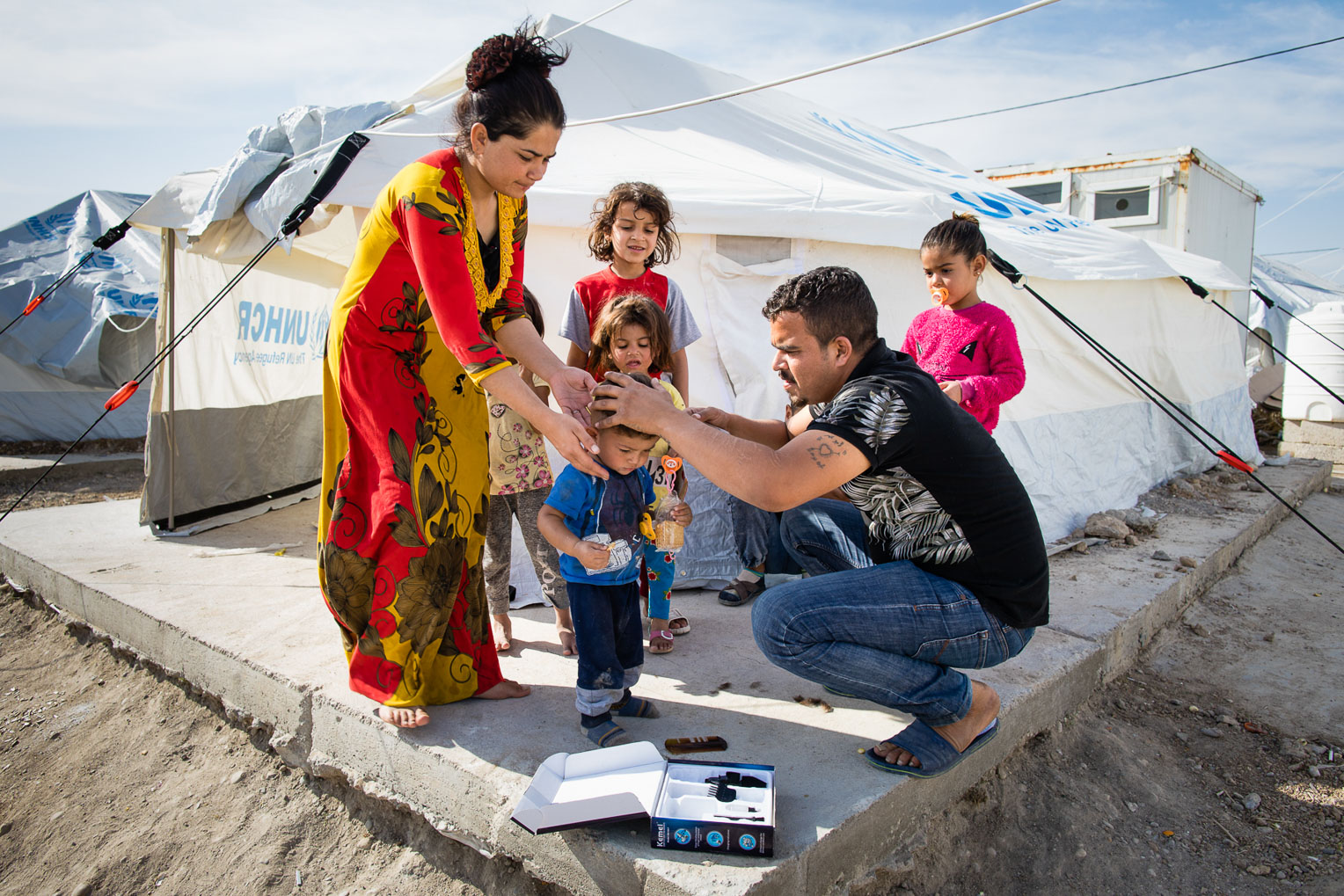 A young refugee receives a haircut in Bardarash camp.

Yekta, a mother of nine children, is one beneficiary who was overwhelmed with gratitude after receiving a water storage tank from Samaritan’s Purse. Each section of the camp only receives access to running water for one to two hours each day, and the timing is unreliable. Prior to the tanks, they had no way to store water, which made it difficult to wash clothes, take baths, and clean dishes.

“The situation is very dire here, but now we have water,” Yekta said.

Her husband remains in Syria because they could not afford to pay to have their entire family smuggled across the border. He sent them to northern Iraq because it was too dangerous for them to stay. Their future is unknown, but Yekta hopes each day that her husband will find a way to come to Iraq and reunite their family. 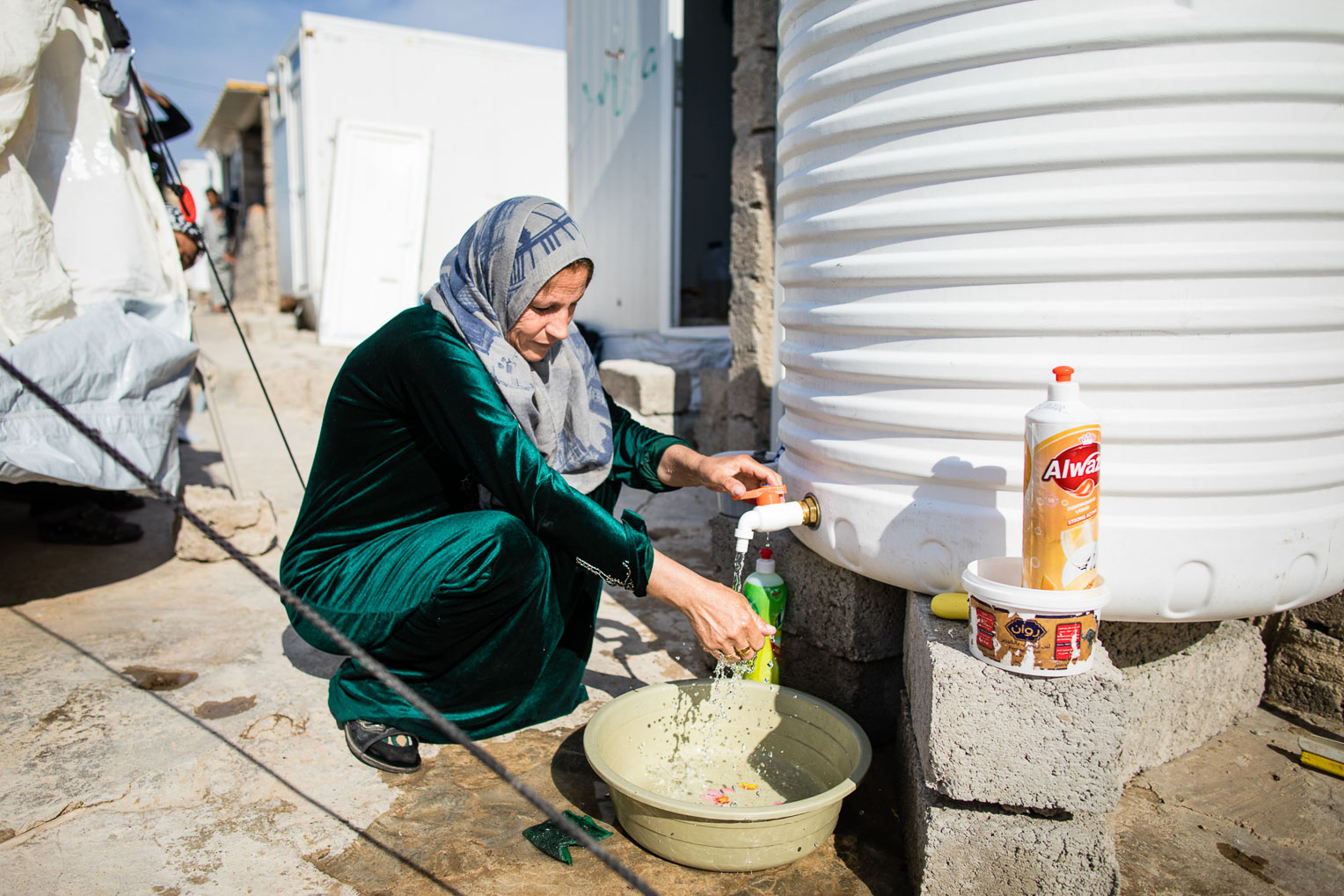 Conditions are getting harsher, rains are coming, and temperatures are expected to drop below freezing in the weeks ahead. Already families like Yekta and Seyda are getting cold at night, and they are worried about their children getting sick.

In addition to working in Bardarash, Samaritan’s Purse is also working at the Sehela Transit Center. This transient camp at the border is the first location many refugees reach. Samaritan’s Purse has provided nearly 4,000 hygiene kits, 1,500 blankets, and 366 pairs of winter boots to vulnerable families there.

Samaritan’s Purse is also supporting partners in northeastern Syria. We are providing 3,000 families with tents, tarps, blankets, and sleeping mats, which are being trucked across the border to meet the immediate needs of internally displaced people.

Syrians refugees are tired and overwhelmed from years of fighting and unrest. Please pray for peace to come into their hearts and lives, and for our team as they share God’s love.

*The number of people in Bardarash camp in Iraq has been fluctuating and remains above 10,000. This article originally published on Nov. 15 but was updated at the top on Nov. 27. 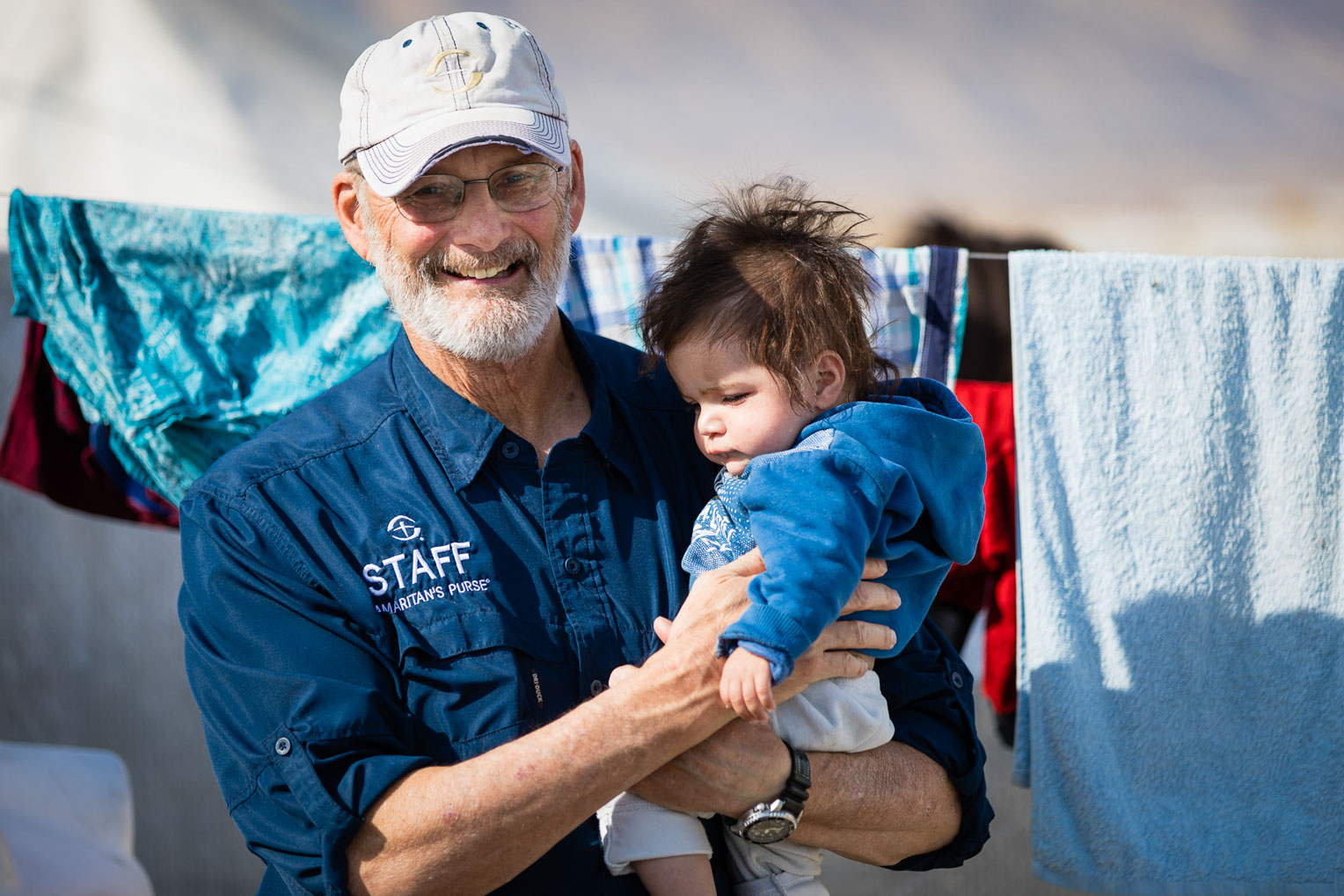