Surgery provides a miracle for Miriam in South Sudan 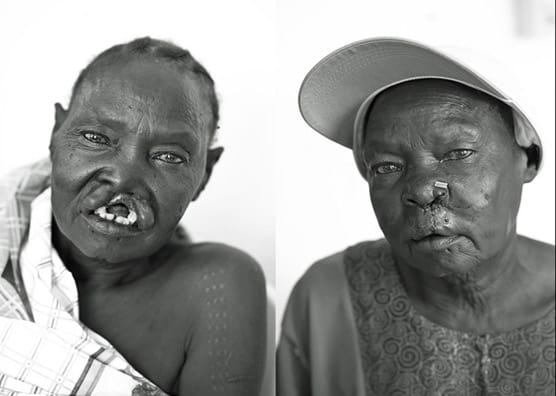 A refugee in South Sudan has life-altering cleft-lip surgery and accepts Christ through a special medical outreach of Samaritan’s Purse.

January, 2013—Miriam had a sweetness that her 20 grandchildren adored. Her eyes danced when she smiled.

But her severely cleft lip often shrouded the joy in her laughter.

Many people in her village in the Nuba Mountains of Sudan believed that Miriam had been cursed. She endured the taunts and nursed the emotional scars of their scorn for 60 years, but she was a survivor.

Just a year ago, Miriam and her family nearly died when armed forces from Khartoum bombed their village in the disputed border region between Sudan and South Sudan, forcing thousands of Nubans to flee on foot.

“Three people running in front of me were killed by the bombs,” Miriam said. “I saw them die.”

A thin, green blanket was all that Miriam had with her when she fled. She and her family walked through scorching heat and dust for days to reach a refugee camp in Yida, South Sudan, where Samaritan’s Purse is providing emergency food, water, shelter, and medical attention for malnourished children. The camp, which first sheltered just a few thousand people, has grown into a refugee community of more than 70,000 people.

Seemingly lost among a sea of refugees, Miriam’s cleft lip caught the attention of a Samaritan’s Purse medical worker in the camp. A team of Canadian and American surgeons was going to be performing cleft lip surgeries, and health workers were evaluating candidates in towns and villages across the country. Miriam was invited to join 77 others who needed surgery.

People in the camp tried to discourage Miriam from going, including her own brother. “You’re too old,” he said. “Why bother now?” But Miriam was determined.

“I want to walk on the road and not look away when people pass by,” she said. “I want to be able to hold my head up high, and no one will laugh at me.”

The day quickly arrived when Miriam boarded a small plane at the Yida airstrip for a two-hour flight to the hospital in Juba. She had never flown before, but she wasn’t afraid.

“I climbed into the plane with all my heart,” she said.

Still, Miriam nervously toyed with the string bracelet on her wrist and the thin cord she wore around her waist, seeking comfort from the charms that a village healer had given her for protection.

When Miriam arrived in Juba, the Christian doctors, nurses, and chaplains working with Samaritan’s Purse welcomed and comforted her, praying for her needs and sharing the Gospel.

A chaplain named Joyce spent time with Miriam, reading from the Bible and explaining the Good News. When Joyce asked Miriam if she wanted to pray to receive Jesus Christ as her Savior, she said yes.

“I did not know the truth before,” Miriam said. “Now, God is with me.”

In a moving act of faith, Miriam cut the charms off her wrist and waist and burned them in the courtyard outside the ward.

Miriam faced her surgery without fear when her turn came. As the anesthesia took hold, she was wheeled into the operating room where two skilled surgeons, Drs. Jim Wade and Warren Cooper, were waiting. In less than two hours, Miriam’s cleft lip was repaired. She woke up with a new face to reflect the new life she had in Christ.

“I am so happy!” Miriam said, gazing into a mirror after the surgery. “I have a new look. I like it!”

Miriam returned to her family in Yida a few days later. At first, even her own son was not sure that the woman getting off the plane was his mother. Soon, everyone was amazed and overjoyed by the transformation.

Miriam’s two sisters, Samira and Madina, welcomed her home and the three women sat and chatted together under a tree.

Miriam was back in a refugee camp, far from her home in the Nuba Mountains, but she was with family, she had a “new look,” and she was happy with her new life in Christ.