Supplies for winter arrive in Iraq

Samaritan’s Purse sent 80 tons of relief to Iraq to help those who have fled ISIS terror. 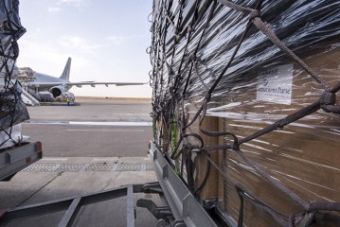 We’ve got our work cut out for us.” That’s how Samaritan’s Purse staff in northern Iraq reacted as they saw 80 tons of relief unloaded from a cargo jet.

“The airlift from Charlotte-Douglas International Airport to the main city of the Kurdish semiautonomous region included a massive amount of children’s clothing, thousands of warm jackets, and tens of thousands of socks and blankets. Also onboard was about 800,000 square feet of heavy-duty plastic that can be used to insulate tents or unfinished buildings.

Seasonal rains are coming and temperatures will be dropping to the low to mid-30s F and even into the 20s F  in some areas, making life even more difficult for families who had to flee in the face of Islamic State jihadists. Many are living in tents or houses and buildings without heat.

“Winter is coming. It can be cold,” Samaritan’s Purse President Franklin Graham told media at the airlift. “Many of the refugees when they fled were only able to leave with the clothes on their back and they are not prepared for this winter. So we’re doing what we can. We want to get this in the country so we can be ahead of the winter weather.”

Hundreds of thousands of displaced men, women, and children have been forced to seek refuge in Kurdish-controlled areas after ISIS militants captured several cities of western Iraq this summer. Among them are traditional Christians who, faced with what amounted to a convert-or-die ultimatum, were given just minutes to escape their homes on the Nineveh plains (Mosul area). Many of these displaced families are or soon will be living in traditional United Nations camps, but perhaps just as many are also staying in unfinished or abandoned buildings, parks, malls, schools, and churches.

Ongoing relief for the persecuted

About 1.3 million Iraqis have been forced to leave their homes this year due to violence. In June, Samaritan’s Purse began a sustained and ongoing response to provide relief to families displaced by ISIS. Several weeks later, that effort was significantly increased as more areas fell to the jihadists and the regional crisis deepened even further. Reports indicate as many as 500,000 displaced persons are now living in Dohuk Governorate with another 200,000 in Erbil.

Since the traditional Christian village of Qaraqosh fell in early August, Samaritan’s Purse has been ministering to more than 200 families seeking shelter in a church in Erbil. We have provided tents, a playground, a large power generator, food, and more.

In broader actions, nearly 3,800 baskets of food have been distributed since the beginning of this response. Each basket is intended to supply the basic needs of a family of five for one week.

Samaritan’s Purse has also distributed more than 4,900 pillows and 7,500 mattresses to displaced families throughout northern Iraq. Beneficiaries include those from Christian, Yazidi, and Muslim backgrounds.

In the past few weeks, Samaritan’s Purse has already reached more than 5,800 families with 20,000 blankets and 3,100 kerosene heaters.

Although some among them have lost nearly everything they own because of ISIS persecution, our local church partners are growing bolder both in meeting physical needs and in proclaiming the Gospel. As they help with distributions, they are coming into contact with Yazidis, Muslims, and others who never would have given them a hearing before.

“There’s an opportunity for local Christians to reach out to their neighbors like never before,” said Tim Windmeyer, deputy director of international projects, who recently returned from a trip to Iraq.

Windmeyer told of a distribution at a mall where 1,200 displaced people had found shelter but were in great need of food. It was late at night, and our staff asked for a handful of local Christian volunteers to help. More than two dozen believers, who had themselves fled Mosul, eagerly volunteered to assist, and they went from family to family welcoming each as they gave out food.

In addition to food, water, and shelter, our staff and partners have given out over 1,000 Bibles. More than 3,300 children have recently received Operation Christmas Child shoeboxes. One church that normally accommodates 80 for worship is seeing 200 in attendance.

Please continue to pray for our staff and church partners ministering in Iraq, and for displaced families to receive the help they need as winter approaches.

“Do not be overcome by evil but overcome evil with good.” Romans 12:21