Staff build ties with young people in northern BC 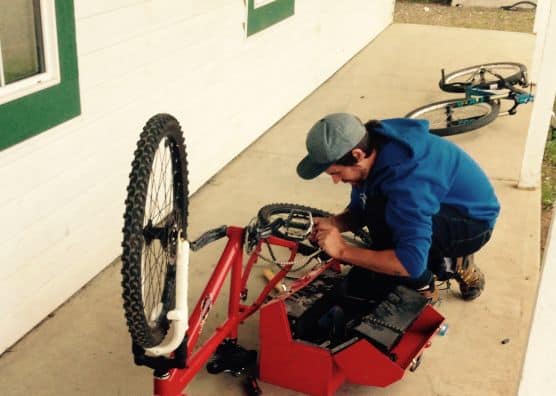 October, 2015—At the Samaritan’s Purse Ministry Center, where we reach out to youth growing up in a remote  area of  northwestern British Columbia, youth worker Abby McKinley says it’s usually fairly easy to establish a connection with the  young people  who walk through the door.

“It’s not difficult to establish a relationship with them at a just-below-the-surface level,” Abby explains. “Then the first time they get mad at you, you have to start over. But that’s when it (the relationship) really starts being real. The first time you have a conflict with them, and they learn you’re going to continue to be there and love them, that’s the beginning of going deeper.”

How is the love and the ‘going deeper’ evident? Here’s one example.

A recent argument between two boys resulted in one feeling depressed and rejected. “No one likes me,” he told lead youth worker Josiah Atkins. “I shouldn’t look in the mirror [because] I’ll just see a loser.”

“You’re loved and respected here,” Josiah gently but firmly responded, before listing off several other children with whom the boy had good relationships. “God loves you too, and He’s your best friend.”

Meanwhile, fellow youth worker Jordan Weller was speaking to the other boy involved in the argument. He was also feeling hurt. Jordan told him “God wants to walk through these things with you.”

Josiah and Jordan encouraged the boys to apologize to each other, which they did, and begin building a good relationship with each other. The youth leaders also prayed with each of the boys, then told the boys’ parents how the conflict had been successfully resolved, and the impact forgiveness was having.

The young people  participate in a wide variety of activities to help them have wholesome fun. One day, they will   build and decorate picture frames, then go for a hike. Another day they will  skateboard and  play carnival games. The list of activities is long—skateboarding, soccer, Frisbee, charades, water relay races, watching movies, playing video games, music jams and more. Each day ends with the staff joining the young people for a supper that has been  lovingly cooked in the former restaurant’s kitchen.

“Good food,” said one boy, when asked why he likes coming to the large white-and-green ministry building every week. “There are fun things to do here like hiking and skateboarding,” added another. “There wasn’t this much to do here in Dease Lake before,” a girl said.

Samaritan’s Purse  opened the ministry center in 2014 after President Franklin Graham passed through the region—home to the Tahltan First Nation—on his motorcycle and felt God’s calling to embody the spirit of the Good Samaritan by reaching out in friendship and concern to local youth.

Both invitations, which Samaritan’s Purse accepted, provided an opportunity for us to “connect with the community and show that we’re part of the community,” Jordan said. They were  blessings to the ministry center that definitely came “through God’s hand,” Josiah adds.