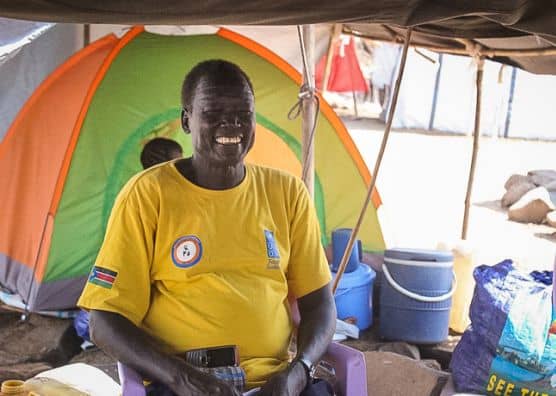 The people in a South Sudanese displacement camp are resilient, but they face difficulties as the rainy season looms.

April, 2014—Pastor John strides up to the Samaritan’s Purse staff members who have just walked into the camp.

He was an archdeacon in the Episcopal Church. Now he is a displaced pastor living with displaced people in a makeshift settlement in South Sudan. His congregation is scattered among the tattered field of tents, tarps, and improvised shelters that constitute home for more than 27,000 doctors, businessmen, pastors, security guards, housewives, pregnant women, students home for the holiday and countless children.

The staff members walk with Pastor John to a tent that is home to Thomas and Jeremiah. The two men were once security guards for Samaritan’s Purse but are now living in the camp along with a river of displaced South Sudanese who fled to the compound for protection when fighting broke out in Juba in December.

The young nation erupted into full-scale bloodshed on December 15,  2013  when political and tribal tensions spilled over and quickly escalated. Hundreds of thousands of innocent people were caught in the crossfire. They fled to camps within South Sudan or escaped into neighboring countries such as Uganda.

Samaritan’s Purse immediately redirected field staff, resources, and efforts to provide emergency relief across the country, including at this impromptu camp.

A group of young men sits under a lattice of wood covered by a battered tarp near the compound entrance. Clothes are drying on rolls of barbed wire across the dirt lane where water trucks vie for space with United Nations and other humanitarian aid vehicles. A torrential rain battered the camp several days ago, drenching everything, collapsing shelters, and uprooting some of the displaced yet again.

Pastor John holds onto the frail wooden struts above his head, illustrating what happened when the torrential rain thundered down on them. Thomas points out where his tent once stood. Now it’s just a pile of debris in a clearing.

The rainy season will make the conditions much worse. They will sleep, eat, and walk in mud. The rains usually start in May. It seems as if they might come early this year.

Every morning, Pastor John gathers with 34 other pastors to pray for peace. The camp has become a single church community for them all. Early on, these men began to identify vulnerable members of their new congregation. In January, they determined to take food and cooking oil and share it with women who had lost their husbands, orphans, or those who had been injured in the fighting.

“God says you are to share with your brother,” John said.

Samaritan’s Purse played a role in providing the supplies, but it was the pastors who took the lead in identifying the most vulnerable. They organized and delivered the food. John wants to do more, and is trusting God to provide a computer so that he can do a better job of keeping track of the needy in the community. How he will keep it dry and functioning is anyone’s guess.

It’s clear to see that the pastors are burdened and hurting, overwhelmed by grief.

Among the tents of the displaced, they are holding worship services, caring for the widows and orphans, and encouraging people who have lost their children, their spouses and their hope in a new country. The love of Christ is extended to all, regardless of ethnic or political division.

“People are just one, one tribe,” John said.

However many have chosen to fight rather than pursue peace, and both sides suffer. Jeremiah left the camp once to return to his neighborhood and was badly beaten.

“We pray to God for peace,” he said through a broken mouth.

God is present here. His love can been seen through the Samaritan’s Purse field staff who walk the dusty lanes to visit their friends, support the pastors, and manage the complexities of assessing and providing emergency relief aid to many displaced people of both tribes throughout the country.

They have been known to bring the occasional chocolate bar or cold soda in as a treat. They are thrifty, creative, intense, savvy, and surprisingly young. And whether they are South Sudanese, Kenyan, or American, they refuse to leave.

The heat beats down on the dusty lanes and tents as we traverse the camp to see where Thomas and Jeremiah live. Two months in, the camp shows some signs of resiliency, organization, and community.

A market has sprung up with meat, bananas, wood charcoal, and cellphone charging stations. A tent court has  been established  to settle disputes or handle wrongdoing; elders bring a ruling amid a group of men. Children flash the universal thumbs up sign, reach out to shake hands, or smile and say, “How are you?” United Nations trucks rumble by while boys play marbles in the dust. Churches meet regularly.

But the conditions are primitive, fragile, and tenuous. There aren’t enough latrines; disease hovers, and the rainy season approaches.

Uncertainty  is another major  challenge

Mary is a food recipient who was widowed during the conflict. She was a policewoman but now sits in the shade with her youngest boy sleeping by her side. She has seven children but only four of them are in the camp. Her twins left the camp, but she hasn’t heard whether they’ve made it safely out of the country.

Karen, her oldest, sits by her side. The teenager had come to Juba from secondary school in Uganda for Christmas break when the fighting broke out. Like many, the bright young woman is stuck. She wants to return to school, but the tuition money has vanished. All the money she earns working in the camp goes to support her family. She is good at math and wants to become a civil engineer.

Her younger sister Sarah sits on the mat beside her. There is talk of a primary school starting, but nothing has happened yet. It will, but it takes time.

The day is coming to an end, and curfew is only a few hours away. Jeremiah asks for a Bible. He lost his in the chaos. They say goodbye and watch as the group drives beyond the gates of the compound into what was once their city.

At 8 p.m., a downpour begins to drum hard against the roof at the Samaritan’s Purse base in Juba. The streets at the camp are turning into rivers of mud; water is dripping through the tarps onto Mary, her elderly mother, Pastor John, Thomas, Jeremiah, Karen, Sarah and her infant brother.

Surviving the rainy season will be tough. But Samaritan’s Purse will be here providing food and other supplies, and supporting the pastors.

Please pray for the peace of South Sudan. Pray for the violence to end so these people can return to their homes.