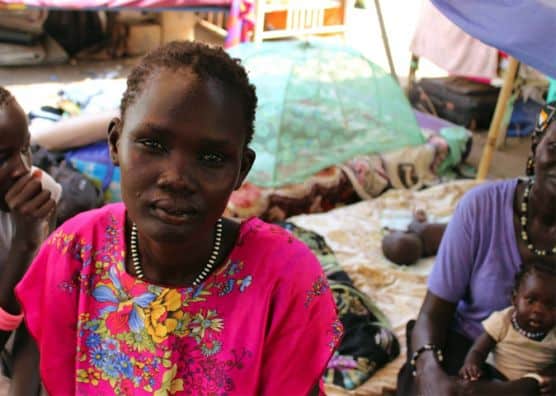 Your donations are providing emergency aid to survivors.

February, 2014—In early 2015, the conflict in South Sudan was  declared a Level 3 emergency—the highest level of humanitarian crisis possible, according to the United Nations’ rating system. Samaritan’s Purse was on the ground responding to some of the more than 800,000 people displaced by the violence.

Thanks to your prayers and financial support, we  provided emergency food, water, and other aid to those who need it most. Several Samaritan’s Purse staff members who were evacuated were able to return to the country, and are serving the suffering in several states.

In Lakes State, the focus of our response is water, sanitation, and hygiene, in addition to non-food items and nutrition. Using donations from people like you, we’re providing clean water by repairing wells, building latrines, and providing health and hygiene training, soap, and jerry cans to families struggling to survive.

“Many people who fled for their lives during the height of the violence are now without access to food and water,” says Dorothy de Vuyst, Samaritan’s Purse Canada’s Regional Director for Africa. “We need to respond very quickly.”

Fighting fueled by political and ethnic tensions broke out between government and non-government forces in Juba, South Sudan’s capital city, in December 2013. The violence has since spread north through Jonglei, Unity, and Upper Nile states.

It’s unclear how many people died in the fighting, although the death toll is estimated to be close to 10,000. Hundreds of thousands of people have fled to safer regions in South Sudan, as well as into the neighboring countries of Ethiopia, Uganda, Kenya, and Sudan.

Samaritan’s Purse has been working in this part of the world for more than two decades. A large portion of our work has been in the northern part of South Sudan, near Sudan’s border.

Through donations from people like you, we have been providing water, food, shelter, and medical care to about 160,000 refugees who have been forced to flee their native Sudan over the last several years in order to escape military attacks from the air and ground.

We have also invested heavily in recent years in the training and reintegration of about 15 South Sudanese physicians who have been making significant contributions to strengthening the health care system in South Sudan. These men and women came to Canada more than a decade ago as refugees and through the support of Samaritan’s Purse and the University of Calgary Faculty of Medicine  have returned to South Sudan.

Several of these South Sudanese-Canadian doctors lived and worked where the fighting broke out, but we were able to airlift many of them to safety. Several have now returned to their places of work and are helping with clean-up so medical care can be provided once again.

Please join with us in praying for the women, children, and others who are suffering as a result of circumstances beyond their control.