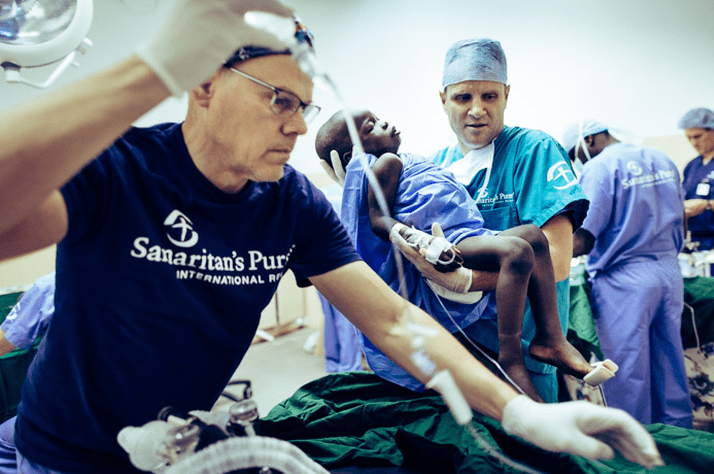 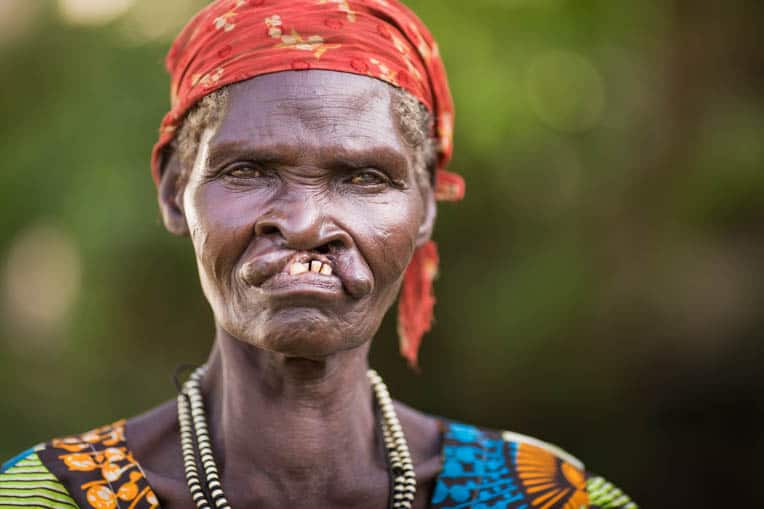 Yunisa waited outside the hospital for her turn to receive surgery.

Yunisa has been lonely her entire life. For 61 years she has been called terrible names, publicly ridiculed, and physically abused. Children run away from her. People throw rocks at her. They say she is cursed.

Because she has a cleft lip.

In the United States, babies born with a cleft lip usually have reparative surgery before their first birthday. But in South Sudan, where Yunisa lives, widespread poverty and lack of healthcare prevent most people from receiving treatment.

Yunisa has never married—she says that no one wanted a wife who was deformed—but she does have a son. When he grew up, he sent her to live by herself, far away from the village—to protect her from violence, he said. Yunisa has a little garden, and her son sends money to help support her. But she is alone.

Yunisa’s life has been difficult, but she is more fortunate than some others. In South Sudan, the stigma is so strong that many babies who are born with a cleft lip are simply abandoned and left to die. Others have trouble breastfeeding and perish from malnourishment or dehydration. 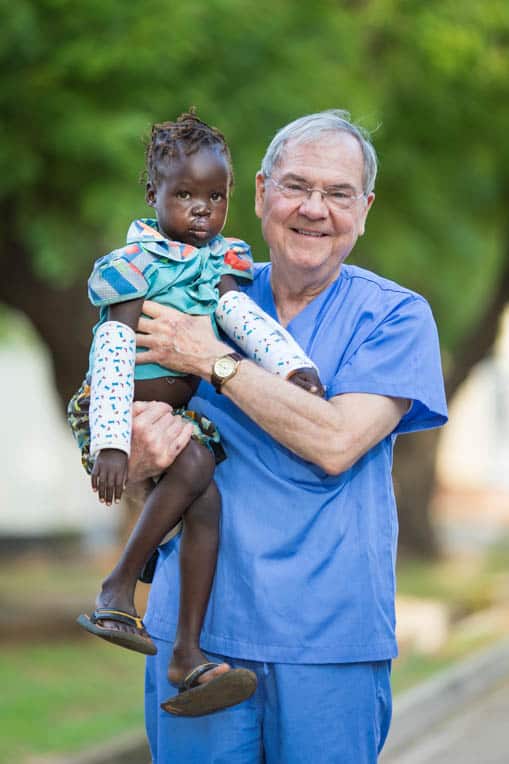 Dr. Jim Wade, a volunteer surgeon with Samaritan’s Purse, repaired the lips of dozens of patients.

Those who live face a lifetime of derision and abuse. They may never marry and are often prevented from going to school. Many are rejected by their own families and have no one to care for them.

A relatively simple surgery, however, can dramatically alter a person’s appearance and change how the public perceives them. Knowing the enormous benefit of these cleft lip surgeries—and viewing them as a tangible demonstrations of Christ’s love to the hurting—Samaritan’s Purse has been offering the procedures free-of-charge in South Sudan for years. Since 2011, our medical teams have operated on 503 cleft lip patients in this struggling African nation; we generally run a weeklong campaign each year.

Last week, April 15-21, a team of surgeons, nurses, and other medical professionals worked together to repair the lips of 87 patients—including Yunisa—at Juba Teaching Hospital.

The procedure to repair Yunisa’s lip took less than two hours. When she opened her eyes and saw her face in the mirror, she lifted her hands in praise. Her lip was swollen and it was difficult to talk, but her eyes radiated joy as she hugged Dr. Tom Boeve, the surgeon who had restored her smile.

“Samaritan’s Purse makes it possible for people who could never get to a cleft lip surgeon to receive life-altering surgery,” Dr. Boeve said. “Now they can go back home and be accepted into the community.”

Yunisa was excited to return to her village—and move from her lonely hut into a home with her son and his family. “I thank the people who brought me here to have this surgery,” she said. “I will go back home and be so happy.” 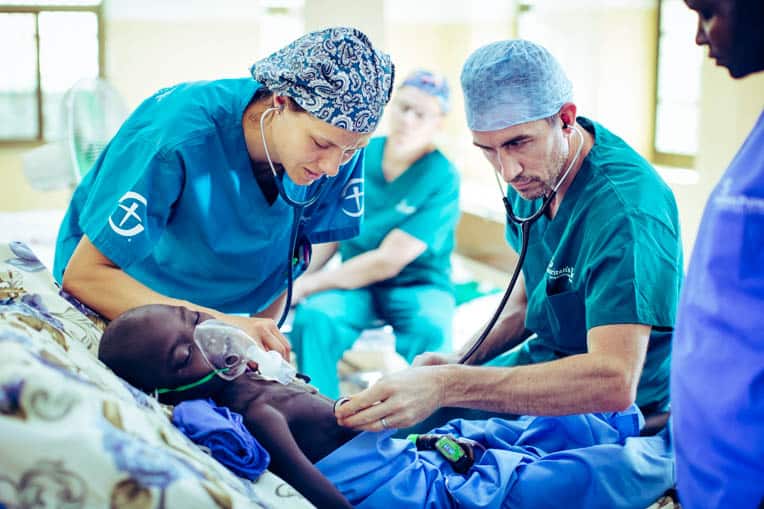 The medical team included experienced nurses and a pediatrician who provided compassionate care for young patients.

Worth the Wait for a New Smile

Ayen lives with her seven children in a remote region called Tonj. When her youngest daughter, Liab, was born with a cleft lip, the neighbors urged Ayen to throw her into the river. She refused, but her heart was broken, and she couldn’t understand why she had given birth to a daughter with a misshapen lip. In South Sudan, it is often assumed that mothers are to blame for their child’s deformity, and they carry a heavy burden of guilt. 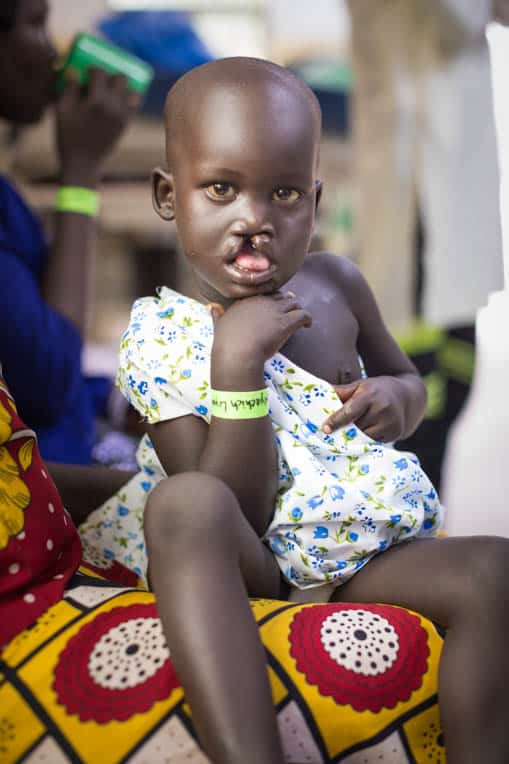 Liab sat on her mother’s lap as doctors examined her prior to her operation.

Ayen was overjoyed when, two years ago, Samaritan’s Purse offered to perform surgery on Liab, a procedure that would have been out of reach for the family—both physically and financially. Their farm is located 96 miles away from the remote airstrip where a Samaritan’s Purse plane landed to retrieve the mother and daughter. Without transportation, they never would have made it to Juba.

When they arrived at the hospital, Ayen was amazed to meet other women who had children with cleft lips. Her daughter was the only child she had ever seen with the deformity.

Unfortunately, Ayen was disappointed when the Samaritan’s Purse doctors told her that Liab was too anemic to undergo surgery. They reluctantly sent her home in 2016 but assured her that the surgical team would return to Juba. She went back to her village with a heavy heart, but with a new certainty that there was hope for her daughter.

This year, when Ayen and Liab once again boarded a Samaritan’s Purse plane and arrived in Juba, they were not to be disappointed.

As the 2.5-year-old girl was prepared for surgery, Ayen spoke with nurse Carol Pollock, who assured her that she had done nothing to cause her daughter’s deformity. “I want you to know that God loves your children very much,” she told Ayen and the other mothers.

Carol’s words carried a special meaning because, like Liab, she was born with a cleft lip. She endured multiple surgeries to repair her smile and was touched by the compassionate care she received from her nurses. God used that experience to call Carol into nursing, so she could help others, too. “It’s a huge blessing to be here beside people who have walked similar journeys as I have.”

When Liab’s surgery was complete, Ayen was brought into the recovery room to see her. After two years of waiting, she gazed down at her daughter’s face, her lip swollen but beautifully mended.

Macheik, 35, has been called “deformed” for as long as he can remember.

Like many other babies born with clefts, he was named Macheik, which literally means deformed in his language. His misshapen lip—a single feature on an otherwise handsome, friendly face—was an inextricable part of his identity.

The tall cattle farmer is quick to laugh and was eager to return to his community with a repaired smile, a sign of hope for others who have cleft lips. But Macheik received even better news during his stay in Juba: the Good News of Jesus Christ. After the surgeons mended his lip, God healed his heart. Macheik prayed with Pastor Kamilo—a South Sudanese chaplain serving with Samaritan’s Purse—and received Jesus as Savior and Lord.

With a new smile and a new identity in Christ, Macheik needed a new name.

Pastor Kamilo gave him the name Peter, after the apostle who declared of Jesus, “You are the Christ, the Son of the living God” (Matthew 16:16). Peter has now returned to his village—no longer an outcast, but an ambassador of Christ’s love.