Serving in South Sudan 'a calling' for Vancouver nurse 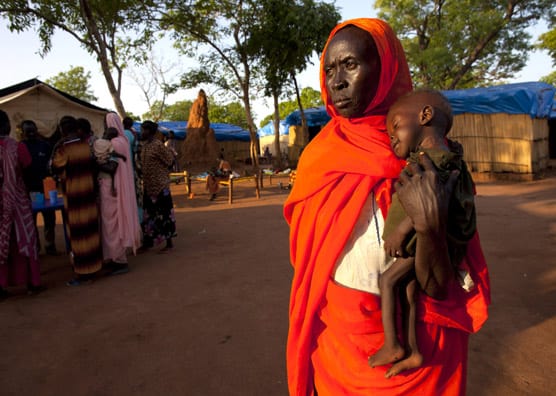 Samaritan’s Purse is continuing to help meet the daily needs of more than 70,000 people living in the Yida refugee camp.

March, 2013—Canadian nurse Karen Daniels didn’t know what she was getting herself into when she first went to South Sudan, Africa.

“What began for me as an adventure has become a calling,” the 41-year-old Vancouverite says. Ten years after she first went to Africa, Karen continues to live out God’s calling on her life as the Samaritan’s Purse health advisor in South Sudan.

She offers medical expertise and assists staff at the Yida refugee camp and several other camps in the Maban region where Samaritan’s Purse is providing crucial help. She also coordinates the Samaritan’s Purse cleft lip program, which has seen over 110 refugees and other South Sudanese receive successful cleft lip surgeries—and hope for a better life, after years of discrimination.

“Yida has to be experienced in order to be understood,” says Karen. “People are being annihilated by their northern government.”

It’s true. Sudan’s government in Khartoum has orchestrated a brutal assault on the non-Arab people who live in Sudan’s Nuba Mountains, sending troops to bomb and burn villages, gun down civilians and clear the mountain region of any possible resistance to its rule.

Forced to leave their homes, the Nuban people cross the border into South Sudan. Those who survive the journey arrive at the Yida refugee camp thirsty, starving and exhausted after hiding in caves and eating insects to stay alive.

Thanks to Canadians’ generous support, Samaritan’s Purse Canada drilled 11 wells at Yida. Improved drainage and sanitary conditions around these wells, along with the addition of a simple chlorination system, are resulting in a reliable daily supply of clean water. Your donations have also built latrines, and provided crucial health and hygiene training.

“It’s a rewarding program, because we often see children get better,” she says.

Other times infants are not so fortunate. After losing a baby just two weeks earlier on the very same bed, Karen—not normally a maternity nurse—helped deliver a healthy baby in the pitch black of a Yida night with nothing but a flashlight and a few meager medical supplies.

“God is gracious and He does miracles in the middle of the night,” says Karen, who recently helped with a miraculous birth of triplets, as well.

Karen’s future sometimes feels up in the air. Every time she returns to Canada, she wonders if it’s time to stay home and live what she calls a ‘normal’ life. But so far, God has always called her back to South Sudan.

“God always seems to have a different prerogative than I do,” she laughs. Karen’s South Sudanese friends agree, telling her she has to stay because, as she recalls one of them saying, “Not everybody could do this.”

But Karen finds strength to do her difficult work from Scriptures such as Psalm 27. “I believe that I shall look upon the goodness of the Lord in the land of the living! Wait for the Lord; be strong, and let your heart take courage; wait for the Lord!” (Psalm 27:13-14, ESV).

See how Samaritan’s Purse is working with refugees in South Sudan: