Dr. Atar cares for war-wounded and sick locals and refugees at a Samaritan's Purse-supported hospital in South Sudan, Africa.

January, 2013—Dr. Atar Evan Adaha is a surprisingly cheerful man for someone  who has spent the last 16 years trying to sew thousands of victims  of the civil war in Sudan, Africa back together again.

The youthful looking surgeon attributes his near-constant smile  to his faith in Jesus Christ-The Great Physician.

Dr. Atar, as he is affectionately known by his patients and  Samaritan’s Purse colleagues, received his medical training in   Egypt, then began working at Samaritan’s Purse’s hospital at Kurmuk  (now part of South Sudan, Africa) in 1997. That was near the  midpoint of what would become a 20-year civil war between Sudan’s  mostly Arab population in the north and mostly black African  population in the south. 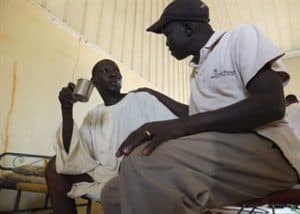 Dr. Atar speaks with a patient in South Sudan.

At the hospital in Kurmuk, Dr. Atar operated on not only  civilians but soldiers-members of the Sudanese People’s Liberation Army intent on overthrowing the government in Khartoum,  Sudan and its persecution of black Africans.

His willingness to aid members of the Sudanese People’s  Liberation Army made Dr. Atar, and the hospital itself, a target  for attacks by northern Sudan government soldiers.   Those  attacks continued long after the 2005 peace settlement, due in part to the  fact that some Sudanese People’s Liberation Army soldiers found  themselves on the northern side of the border when South Sudan,  Africa gained official independence last July, and have continued  to fight against the north since then.

Khartoum, Sudan military leaders bombed the area around Kurmuk  hospital so regularly and aggressively that Samaritan’s Purse  abandoned the site in November 2011 and moved the medical personnel  and equipment to the Doro refugee camp near the South Sudanese city  of Maban, where we have helped  provide water, food, medical aid,  and other relief services.

Dr. Atar is admired by the South Sudanese for remaining in  Kurmuk, Sudan until every other staff member had been evacuated and  almost all equipment removed-continuing to operate on patients  while bombs fell nearby. He is also viewed as a hero in the Doro  refugee camp for his willingness to put in crushingly long hours-sometimes 24 at a time-as the only surgeon in the region with a  population of more than 200,000 people.

The next nearest surgical facility is an eight-hour drive away.  During a typical day recently, Dr. Atar’s patients included several people with broken bones, including one with a broken femur, others  with internal injuries (including a young man with a ruptured  abdomen), and a soldier whose injuries from an explosion included  the loss of both eyes and part of his lips.

At the end of his time in the Samaritan’s Purse-built operating  room, Dr. Atar carefully went from bed to bed in the neighboring  wards, talking with, encouraging, and clasping hands with almost  every patient.

When someone suggested to Dr. Atar that he deserves public  recognition for his passionate and loving commitment to his  patients, the smiling doctor thanked God for his medical  giftedness, and thanked Samaritan’s Purse for its faithful support of his work in Kurmuk, Sudan and now in the Doro refugee camp.

“If it wasn’t for Samaritan’s Purse, I don’t know how many lives  I would have lost. So much would not have been possible without them.”