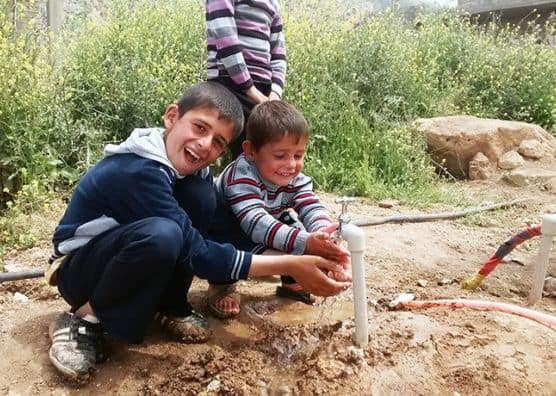 Six hundred families displaced by terrorists now have easy access to clean water thanks to the efforts of Samaritan’s Purse in northern Iraq.

May, 2015—When ISIS overran Sinjar last summer, many of the city’s residents fled into the mountains and headed for safer areas to the northeast.

They are among the estimated 500,000 people from Sinjar, the Mosul area and other regions overrun by ISIS who ended up in the Duhok Governorate of northern Iraq. So many families from Yazidi, Muslim, and Christian backgrounds arrived that they simply overwhelmed existing infrastructure.

Some 4,000 Yazidis (followers of a unique syncretistic religion focused on angels) squatted along a highway not far from the regional capital. Many of them, such as Monifa and Lazina and their families, had been traumatized after spending a week trapped on Mt. Sinjar before finally managing to flee on foot through Syria.

Owners of unfinished buildings in a nearby traditional Christian village had compassion on these displaced families and allowed them to move in not long after they arrived back in Iraq.

The desperate survivors were grateful, but major problems remained, including the water and sanitation situation.

For months, the United Nations trucked in water from a well about two miles away. However, the supply was low and service times were inconsistent. Sometimes the water trucks did not come for seven days.

Women and girls occasionally had to go searching for clean water to drink, bathe, and wash clothes and dishes. Trucking  was also quite expensive and not sustainable for the long term.

Samaritan’s Purse recently stepped in to help by installing nearly two miles of piping from the well to the village. Along with the underground piping, we set up 77 distribution points—taps with hose adapters—to provide water access to the 600 displaced families.

“I want to say thank you for this help,” said Bazid, a Yazidi from Sinjar. “You [your supporters] are far away from us, but still think about us.”

“Laundry was being done everywhere,” wrote one of our staff members. “People were also digging trenches so they could put hose under the road to connect their water tanks to the taps. It was really interesting to see how dramatically we changed the way people live by giving them better access to clean water.”

Many thousands of displaced people are living in unfinished buildings without consistent access to clean or proper sanitation. Our team in northern Iraq is currently focused on providing these necessities.

In addition to the piping project, we have provided a septic system to serve the needs of 620 people living in an 18-room, partially constructed school building. They had shared one toilet between them all.

Samaritan’s Purse will continue implementing several water, sanitation, and hygiene (WASH) projects in coming months to help those who’ve fled ISIS terror. We are actively engaged on a project right now to improve the water supply for a camp of 28,000 people.

In other ongoing work, we continue to create child-friendly spaces for youngsters traumatized by the terror of jihadists. Displaced and living in cramped, chaotic conditions, many boys and girls have not been to school in months. The areas we’re creating are safe places where kids can be kids and start to heal. Some of these spaces will offer playgrounds, some libraries, others will have locations for art, music, or dance classes.

Through all our work, our teams have unprecedented opportunities to minister to Iraqis who are seeing the love of God in action. We are able to pray with the hurting and point them to the Good News of Jesus Christ.

The words of the prophet Nahum, who is buried outside Mosul, remain as relevant today as they were in his day: “The Lord is good, a stronghold in the day of trouble; he knows those who take refuge in him. But with an overflowing flood he will make a complete end of the adversaries, and will pursue his enemies into darkness” (ESV).

Please continue to pray for the people of northern Iraq and our work there.