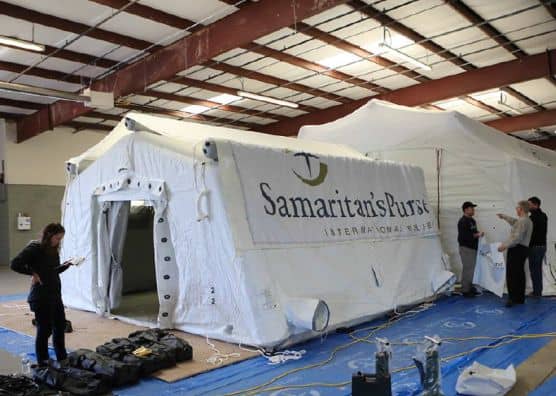 Responding to a request from the United Nations, Samaritan’s Purse is preparing to send medical workers to the embattled city of Mosul.

The city in northern Iraq has been under ISIS control since 2014 and an Iraqi Military operation to remove insurgent forces from the area started in October. When the siege began, there were a million civilians estimated to be trapped within the city.

“We’re prepared to do all we can to help save lives,” Samaritan’s Purse Canada’s Executive Director Fred Weiss said in the statement. “Deployment of this field hospital will provide emergency medical aid not otherwise immediately available to those fleeing Mosul.”

Frank King, news media relations manager with Samaritan’s Purse Canada said the charitable group is confident in their ability operate a field hospital in a war zone. Samaritan’s Purse has provided aid during many natural disasters and crisis situations including the 2010 Haiti earthquake, the 2013 Philippines typhoon and the group helped treat hundreds of people injured in a massive earthquake in Ecuador this past April.

“We’ve already done this once before,” King said. “We established an emergency field hospital capability about a year ago and we first deployed one in Ecuador.”

A Christian charity, Samaritan’s Purse is prepared to offer aid to people in Mosul regardless of religious or government affiliation, including members of the insurgency.

“This hospital is to treat the wounded, whoever the wounded are,” King said. “Anyone who’s wounded comes to us or is brought to us, we will treat. But we do have a very significant safety and security component built into this whole deployment . . . we’re also coordinating with local government and local military in terms of safety and security for the hospital.”

King said there will be security staff and personnel on the ground in Iraq to ensure the staff is safe while treating the wounded. Because of the security risks involved with working in a war zone, the identities of the staff headed to Iraq are not being released to the public.

“There will be some Canadians involved . . . these will be primarily doctors and nurses.”