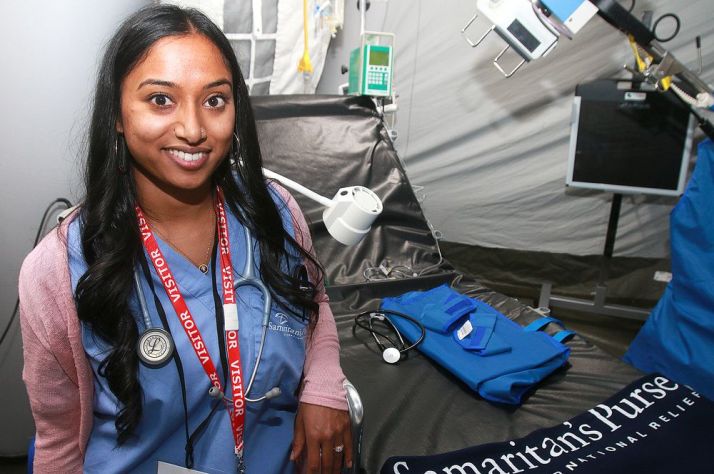 In case you weren’t sure what Samaritan’s Purse Canada is all about, enormous 12-metre-tall photo murals in its sparkling new 115,000-square-foot warehouse will leave no doubt: “Delivering Hope in Jesus’ Name.”

That motto literally hangs from the rafters in every section of this impressive space that was officially opened by Franklin Graham, Billy Graham Evangelistic Association and Samaritan’s Purse president and CEO, before about 400 donors, volunteers, staff and board members Friday in northeast Calgary.

Every palette on every jam-packed and tidy shelf is filled with hope in the shape of hygiene kits, emergency kitchen sets, sturdy emergency shelters, emergency family tents, fibre-reinforced plastic sheeting, malaria netting, blankets, water filtration kits, buckets and, of course, emergency field hospitals that became world renowned after the Christian-aid organization was at the front-lines battling the Ebola virus in Liberia, Africa, in 2014 that helped save perhaps millions of lives and prevented the deadly virus from spreading around the world. Indeed, Samaritan’s Purse is currently in Congo, with Canadian nurses and doctors, helping to tackle an Ebola outbreak in that troubled African country.

“We come today to dedicate this facility to God’s glory and to His son, Jesus Christ,” said Graham to the invited guests. 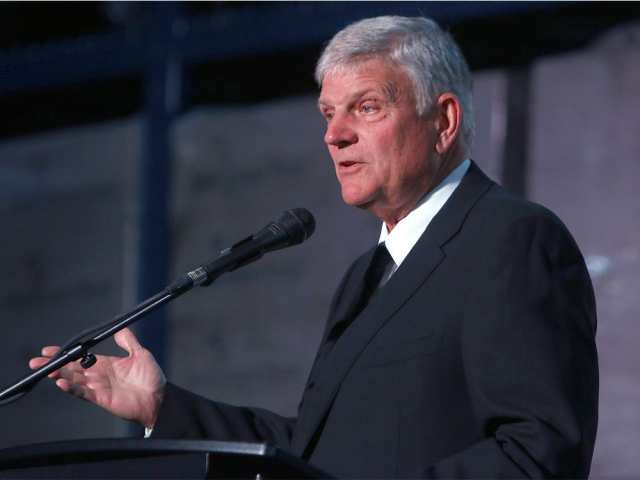 Franklin Graham, president and CEO of Samaritan’s purse and the Billy Graham Evangelistic Association, speaks at a dedication ceremony for the organization’s new warehouse on Friday, June 7, 2019. DEAN PILING / POSTMEDIA

“This is a building and it has stuff in it and this stuff has a purpose. I believe that when there’s a crisis we need to get moving now,” he said with emphasis, regarding the 100 countries the organization has mobilized in following natural disasters, famine and war.

“If you wait to buy stuff, it may not be available, so you have to have some stuff in-house so you can start moving to help the people who need it immediately,” he said.

“The stuff in this warehouse is stuff we need, stuff that can be used to make a difference in a person’s life,” he added.

He points out that the warehouse is not quite full yet, but there’s enough emergency equipment to fill the organization’s DC-8 plane five times. 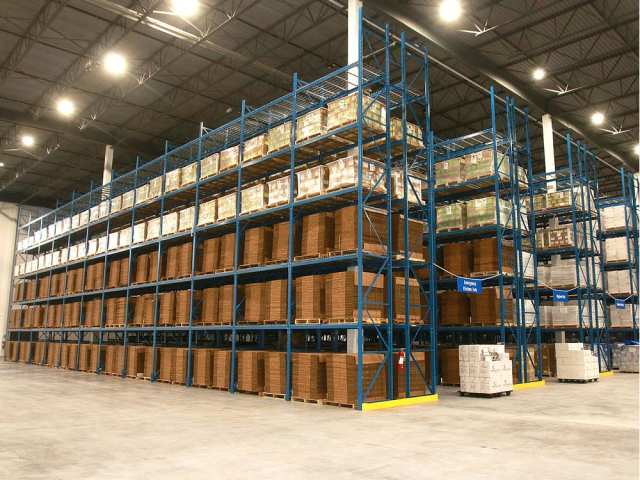 Goods for an emergency are stacked floor to ceiling in Samaritan’s Purse’s new warehouse. DEAN PILING/POSTMEDIA

“We are going to use every tool we can to communicate to a hurting world that God loves them,” Graham said to applause.

Following the program, Graham said in a private interview that “there isn’t another facility like this in Canada.”

Graham credits the foresight of the charity’s board member, Jack Neufeld, for insisting on buying an additional 2.5 hectares next to the main Canadian headquarters at 20 Hopewell Way, N.E., that was built in 2003 and already had a large warehouse attached to the offices.

Graham said after a flood, fire, earthquake or tsunami, sometimes people think maybe God is mad at them, that they are being punished.

“I want them to know, no. Jesus himself was caught in a storm. That doesn’t mean God is behind it. So we still want people to know that God loves them and cares for them so that’s why we go in Jesus’s name, to be the hands and feet of Jesus. And this warehouse allows us to do that even better than before.”

On Saturday, between 10 a.m. to 2 p.m., Samaritan’s Purse is hosting an open house for people to see the facility, walk through a scaled-down version of one of its field hospitals, like the 80-bed one set up outside of Mosul, Iraq, during the war there, that tended to injured civilians, Iraqi soldiers and even ISIS members, who would be treated and then held for the Iraqi army to take into custody later. 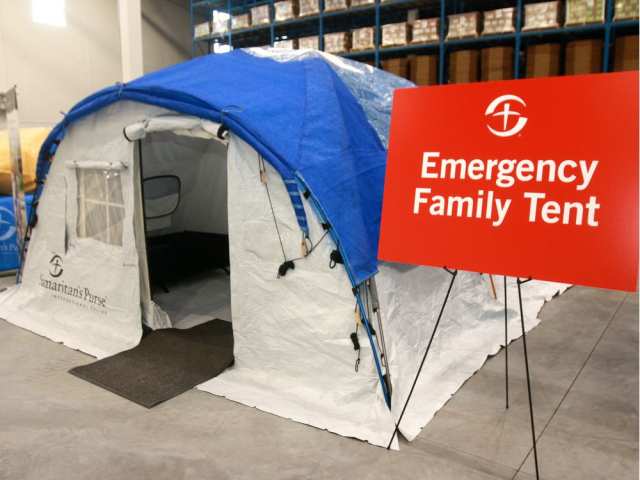 An example of the emergency family tents Samaritan’s Purse is able to transport to areas in need of emergency housing. DEAN PILING/POSTMEDIA

Maria Torres, 51, an emergency room registered nurse who works at Calgary’s Foothills Hospital, has donated her time twice to work in a Samaritan’s Purse field hospital: once following the devastating earthquake in Haiti in 2010 and for the month of June in 2017 just outside of Mosul where ISIS was creating mayhem.

She remembers the excellent care and love they were able to provide to the people of Iraq, but one incident remains closest to her heart.

A seven-year-old girl arrived with part of a leg missing from the fighting. Further surgical amputation was needed to prevent gangrene.

“When she came in, she wasn’t just terribly injured, she was so traumatized she couldn’t speak,” recalls Torres. “She would just stare off into the distance. She would not look at anyone.”

The girl needed to stay at the hospital for more than two weeks to recuperate from her surgery and injuries, and every day Torres and other medical volunteers would go and pray with her and try to play with her.

“When she left us, she not only gave me a hug, she was smiling. When you care for people and really love them, they can sense that and the barriers come down and so for me, that’s a case that I remember. It’s something I will never forget. It is stamped on my heart forever.”

Once Samaritan’s Purse ends a deployment, it leaves the entire emergency field hospital and all of its equipment with the country’s government so it can be used in other parts of the country where it’s needed. 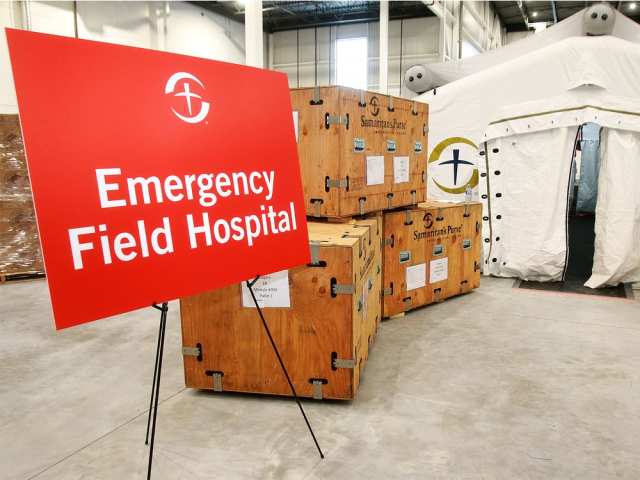 “I can’t think of a better investment than giving to Samaritan’s Purse and donating your time,” said Torres.

Graham says that kind of love is in the “organization’s DNA” and is a gift from God. It’s is what mobilizes them to rush into places that others desperately try to flee.

Visitors to the warehouse can also walk through emergency shelters that Frank King, Samaritan’s Purse’s news media relations manager, says some people in Haiti told him were better than the homes they lived in before the earthquake swallowed up everything they owned. There’s even a house where you can “Feel the Fury” of what it’s like to live through a tornado.

Sean Campbell, who was the first executive director of Samaritan’s Purse Canada and came from Texas for the event, said he remembers when he started the operation on Aug. 1, 1988. They didn’t even have a computer. Just a typewriter and a modem hooked up to the U.S. office.

“I remember our budget that year was $123,000 and me,” he said. “But God obviously had a plan to care for people and reveal His love to people and I look at it today and I think, this is an incredible facility and I think of all of the tens of millions of lives that have been touched and the people who have heard about God’s love for them and whose lives have been changed and I say, ‘Only God could have done this. Only God.’”

Licia Corbella is a Postmedia columnist.