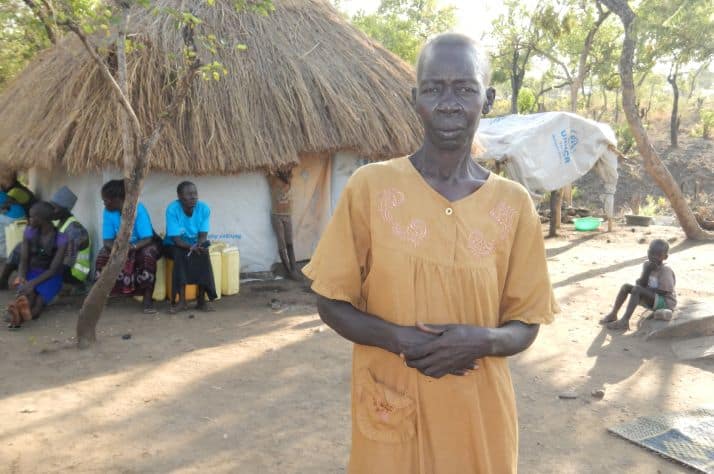 Refugees share about life in Bidibidi Resettlement in Uganda, and the conflict that plagues South Sudan.

Jane Janaba has already endured more heartache and struggle than any person should have to bear.

The 60-year-old woman from South Sudan has been a widow for three years, after her husband became sick and died. The couple had six children, but one was killed and another disappeared without a trace during the country’s ferocious civil war, which began last year.

“People were being killed,” Jane recalls somberly. “Others were being robbed at night. We were living in fear all the time because of the war.”

So despite being at an age when most Canadians are preparing to retire, Jane gathered her four remaining children, plus four grandchildren, and set out last August for the safety of Uganda. They had to travel through the bush to avoid being attacked along South Sudan’s lonely dirt roads.

Jane and the others walked south for four days and nights, with very little water and food, before finally crossing into Uganda. Officials with the United Nations High Commissioner for Refugees (UNHCR) bused them to a reception center at the Bidibidi Refugee Settlement, where their lives began to regain some order.

Within a couple of weeks, Jane and her family were given a small plot of land on which she and her older children built a mud-walled hut. The UNHCR is continuing to give them food rations, and Samaritan’s Purse is using donations from people like you to drill a well to provide water to them and everyone else nearby, including Ugandan families already living in the area.

Alfred Modi, leader of the 26,000-member community of Yangani in which Jane and her family are living at Bidibidi, noted the well can provide as much as 10 cubic meters of water per hour, which shortens the line-ups of people waiting with their yellow jerrycans.

“We thank you, Samaritan’s Purse, for working with us here. We’ve been working together (in Uganda) for a very long time, and I’m thankful.”

UNHCR official Grace Atim said that as Samaritan’s Purse drills more wells throughout the Bidibidi Settlement, there is less and less need for UNHCR to truck in water, which is expensive and difficult to continue during the rainy season when dirt roads can be impassible.

Meanwhile, thanks to the generosity of Canadians, Samaritan’s Purse has also built communal and household latrines in Bidibidi, and provided Jane’s family and many other refugees with seeds and farming tools to grow food.

Robert Baryamwesiga, the Ugandan government official responsible for the Bidibidi Settlement and its 272,000 residents, says: “We thank you, Samaritan’s Purse, for working with us here. We’ve been working together (in Uganda) for a very long time, and I’m thankful.”

Jane still wonders what has happened to her missing son. But she finds consolation in knowing her other children and grandchildren are safe in Bidibidi, due in part to Samaritan’s Purse and donors like you.

“I am enjoying it here,” Jane says. “We sleep freely at night. In South Sudan, you don’t sleep because you will be waiting for when you are killed.”

Pray for the millions of people in South Sudan at risk of starvation, and that peace would come to their country.