Northern Iraq Community Center provides medical care and vocational training for entire families who have had to flee their homes.

To approach one camp of 18,000 internally displaced people (IDPs) in Northern Iraq, travel down a dirt road lined with people selling fruit, vegetables, and chickens. Turn right at a break between the vendors and head across an open area peppered with tents—makeshift homes of members of the Yazidi religious minority.

Just before reaching the chain-link fence that borders the camp, you find the Northern Iraq Community Center, a former bar that Samaritan’s Purse transformed into a medical clinic and vocational training center to serve the 30,000 Yazidis who live outside the camp in the surrounding village. They have been in limbo for almost two years since the Islamic State of Iraq and Syria (ISIS) forced them from their Sinjar homeland in August, 2014 with convert-or-die threats.

The Yazidis are a closed religious sect within the Kurdish ethnic group. They practice an ancient religion that incorporates aspects of Islam, Christianity, Zoroastrianism, and Anatolian theology into a faith based on sun worship, reincarnation, and dualism.

The Northern Iraq Community Center isn’t just addressing the needs of Yazidi women and children who have fled terror, but is ministering to entire families. “I love our approach,” our community center director said. “We’re restoring dignity to the whole family.”

Since October 2015, the Center has been offering classes in carpentry, computers, sewing, photography, and art running between four and eight weeks long. Taught initially by an expert, the classes are in time taken over by an apprentice instructor. 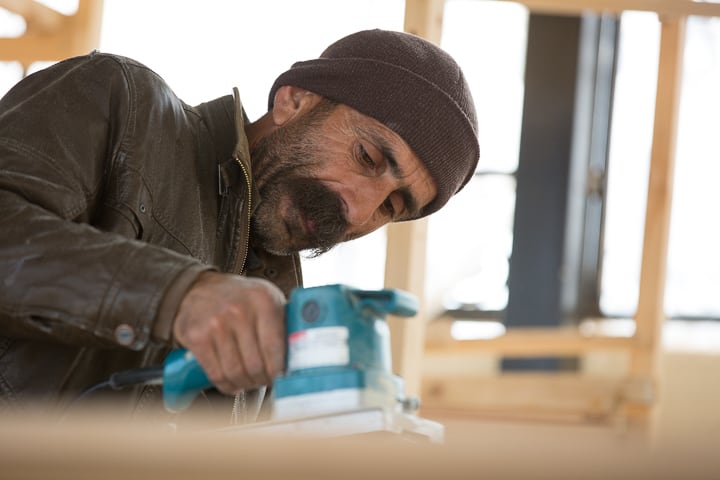 Hakim is learning woodworking skills through our community center in Northern Iraq.

Hakim, one of 10 students in the eight-week carpentry class, was like 65 percent of the students—he had come with no previous experience working with wood. “But now I can work as an expert,” he said. Class projects, including a small greenhouse (made of a wood frame and recycled plastic water bottles), a picnic table, a shelving unit, a television stand, and an armoire, progressively increased his skill level.

“It’s very helpful for our mind and thoughts,” Hakim said. He was grateful that the class gave him something to do and allowed him to meet people from other areas around Sinjar who experienced trauma similar to his. The memory of 26 of his family members fleeing for their lives in a single car is still vivid.

Find out more about our work in northern Iraq

More fortunate than some IDPs, Hakim rents a small home with a large yard for $300 a month. A farmer before he left Sinjar, Hakim uses his yard to grow legumes. The picnic table he made in class sits outside next to his field of beans and his armoires grace the inside rooms. Those in his class who did not have space to keep their creations sold them to help provide for their families.

Hakim’s 17-year-old son Jamali is enrolled in the six-week computer class at Northern Iraq Community Center. “It’s good for us,” he said. “I want to learn everything about the computer. I hope this will help me find work.”

The certificate he earns at the end of the course could be the only diploma he ever attains.

One of his computer classmates said, “It’s terrible when you don’t know what your destiny will be, when you left your home and all of your memories.” But together in the class, they encourage one another toward a more stable future.

In the four-week sewing class consisting of eight women ages 17 to 50, twenty-year-old Leyla appreciated the sense of community that came from the class. “We were just like sisters,” she said as they went from no knowledge of sewing to learning how to do zippers, buttons, and pockets. “It was a benefit for us psychologically,” Leyla said. 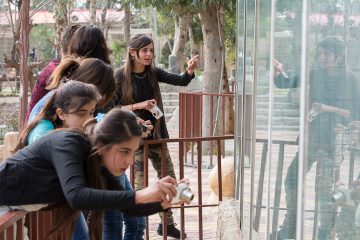 The photography class made a field trip to the local zoo.

In addition to the benefit of gathering with other women to talk about their experiences, they also got to serve the least fortunate among them. The clothes made in class are given to the neediest IDPs. At the completion of the course, the Center gives each of the students their own sewing machine so they can continue practicing their skills by sewing clothes for their family or starting a business.

Their teacher, a widow  with 20 years of experience as a seamstress, also fled her home in Sinjar in August 2014 in order to save her life and the lives of her three children. Her extended family left without her so she and her children walked the 43 miles (71 km) to Syria alone, spending one night on the road. Once in Syria, trucks arrived to transport her and other IDPs to the camp next to Northern Iraq Community Center.

Grateful for her job, she said, “Here I get to keep my dignity.”

As 13- to 24-year old students gather for photography class, they learn much more than the mechanics of a camera and how to frame a good shot. Their teacher encourages them to take pictures that portray dignity. “I teach them respect for people”—not just the pretty,” she said. The class also discusses the lives of Ludwig van Beethoven, Martin Luther King, Jr. and Rosa Parks to illustrate that people can overcome significant challenges to do great things.

For 14-year-old Gabir, his favorite experience in the class was going to the zoo to practice taking pictures of animals. It was the first time he had seen a lion or a tiger. “We want to work in photography in the future,” Gabir said. “It is a benefit for us.” 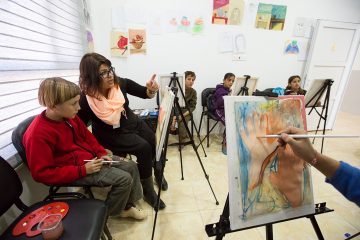 In the art classes for children ages 5 to 12, easels and chairs line the perimeter of the room. Completed student paintings hang on the walls and music plays to inspire the children work on their pieces. “First, I help them express their emotions on the page,” said their teacher, Farrah.

As she helps them learn the fundamentals of art, she sees that the class “helps them grow themselves and in talking with other people.” Such communication is important for those who have experienced trauma as significant as fleeing from ISIS.

Farrah can identify with her students. She was a law student in Syria before her home was destroyed by gunfire and she had to escape. Today she lives in one of the refugee camps in Northern Iraq.

“You care about us as Yazidi people”

The Northern Iraq Community Center also reaches out to children who are too young to attend classes. A playground and child-friendly space offering constructive play options help preschool children process their pain. 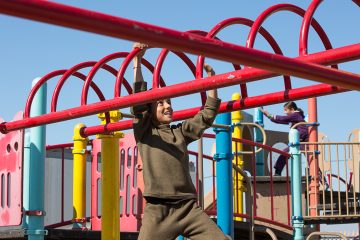 Next to the child-friendly space, a medical clinic offers general medicine, obstetrics/gynecology, and pharmacy services. Dental services are scheduled to begin in mid-July. The clinic differs from other medical care in the region by not offering a prescription for every ailment, but by encouraging a healthy lifestyle.

The Center also is planning for a salon on campus to serve the women in the community and offer vocational training to select IDPs.

“Thank you!” said Sabeen, one of the community center case managers who also lives in an IDP camp. “You care about us as Yazidi people. We feel that we are not alone but that you are with us.”

*Names have been changed throughout for reasons of security.