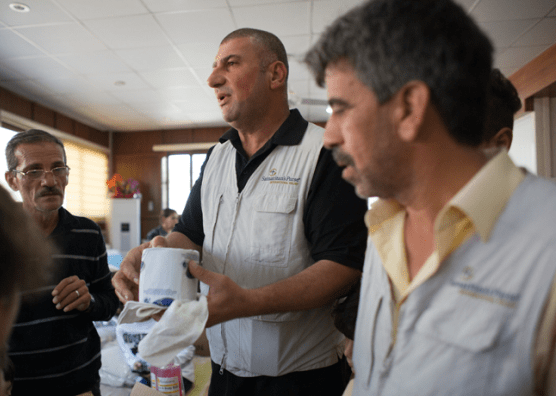 The simple gift of a hygiene kit lets returnees know they are not alone.

Pictured Above: Samaritan’s Purse staff handed out hygiene kits last year in Erbil. While these people had not been taken captive by ISIS, they had urgently fled their homes and were grateful for any help.

July, 20115—I had just been informed that a group of men, women, and children had been released from ISIS captivity. They were due to arrive within the hour, and I had no idea what condition they would be in. They likely would only possess the clothes on their backs yet be bogged down with the baggage of the trauma they had just endured over the past months.

I started to think what would practically meet their immediate needs and our hygiene kits came to mind.

One kit contains the necessities for an entire family’s hygiene needs over the course of a month. It includes toothbrushes, toothpaste, soap, shampoo, a comb, razors, towels, feminine hygiene items, as well as baby diapers as needed.

These kits are beneficial because they allow individuals the ability to be clean, healthy, and regain some of the dignity that has been taken away from them because of what they have experienced. Over their time in captivity, they did not necessarily have access to any of these items and were made to feel unclean through numerous kinds of abuse.

It’s been said that when someone who has been captured by ISIS returns, it is as though he or she is starting a new life. In a physical sense because everything they once had is now gone or inaccessible, but also in the sense that they will never be the same again. 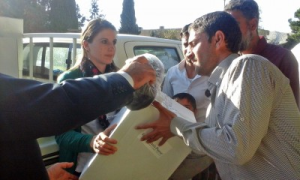 JF hands out hygiene kits to returnees from ISIS captivity.

We quickly loaded up our trucks with hygiene kits and arrived to the hospital where the returnees had just undergone a preliminary medical check-up. We waited for them to exit the hospital one by one.

Some had just been reunited with their families who had been praying and hoping for months for their escape.

Many of the returnees were numb, in total shock, while reunited sisters were hugging and crying tears of deep anguish but also great joy. Families rushed to nearby stores and bought sweets and toys for the children who had been in captivity.

Amid all the emotion and excitement, Samaritan’s Purse was able to be the first entity to welcome these brave survivors back with the gift of a hygiene kit.

Many expressed their gratitude. One woman who was just freed with her children commented that she did not know how she would survive without her husband who was still in captivity, yet she was grateful for any immediate help like the hygiene kit that we were able to provide her with.

Every few days the number of returnees grows, and Samaritan”™s Purse in Northern Iraq is responding to meet their needs in a timely and effective manner.