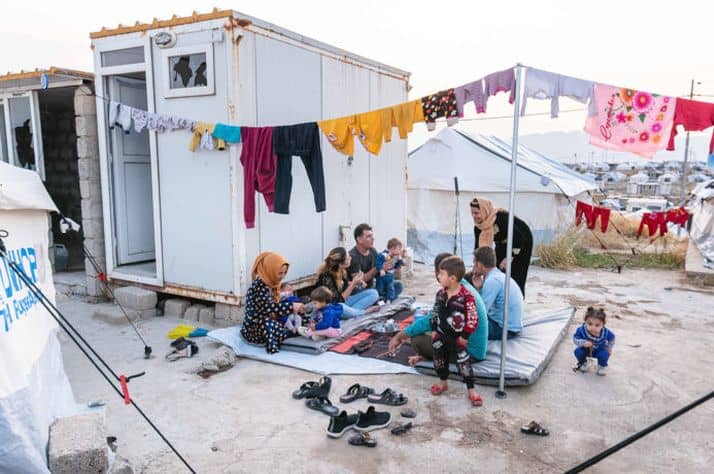 A Samaritan’s Purse disaster assistance response team is on the ground to help those fleeing conflict.

Samaritan’s Purse continues to help thousands of Syrian refugees who’ve recently crossed into Iraq. These desperate people–the majority of whom are women and children—are fleeing in the wake of Turkey’s early October invasion into northeastern Syria.

Our disaster assistance response team (DART) is distributing relief—including water, blankets, and hygiene kits—to families in need at the United Nations transit camp in Sehela, at the border of Iraq and Syria. We first responded in Sehela on Oct. 21 to meet the urgent needs of about 1,300 refugees who showed up after dark. In light of the sudden influx, camp leaders requested our help to provide needed items to all new arrivals who stayed the night.

As of Oct. 28, more than 12,000 refugees have reportedly entered Iraq due to the latest conflict in neighboring Syria. Violence along the border between Turkey and Syria continues among the many armed parties in the region, though the situation has deescalated somewhat in light of a cease fire brokered by the U.S. that was followed by a “safe zone” agreement between Russia and Turkey.


Samaritan’s Purse has been given permission, on an as needed basis, to begin medical screening of new arrivals in Sehela. We can also treat immediate health issues as they are identified. After staying up to 24 hours at the Sehela transit center, refugees are transported to larger camps within Iraq.

In addition to our work in Sehela, Samaritan’s Purse is working to repair water, sanitation, and hygiene (WASH) facilities for the more than 10,000 people who now reside at the Bardarash refugee camp in Iraq. This facility, which formerly accommodated internally displaced people from Mosul, had set empty for roughly six months and fallen into a state of disrepair. It was anticipated to fill again with Syrian refugees over a matter of weeks or months, but instead reached capacity in 10 days.

The bathroom facilities were not functional when the refugee families arrived. Pipes were broken or blocked. Some latrine areas had even been covered over and used for kitchen facilities instead by the previous residents.

Sipan Yazdeen, Samaritan’s Purse WASH project manager in Iraq, described the scene of these latrines: “No door, no toilet, no shower, no taps…It’s a critical situation especially for the women: they cannot have showers, they cannot go to the bathroom.” 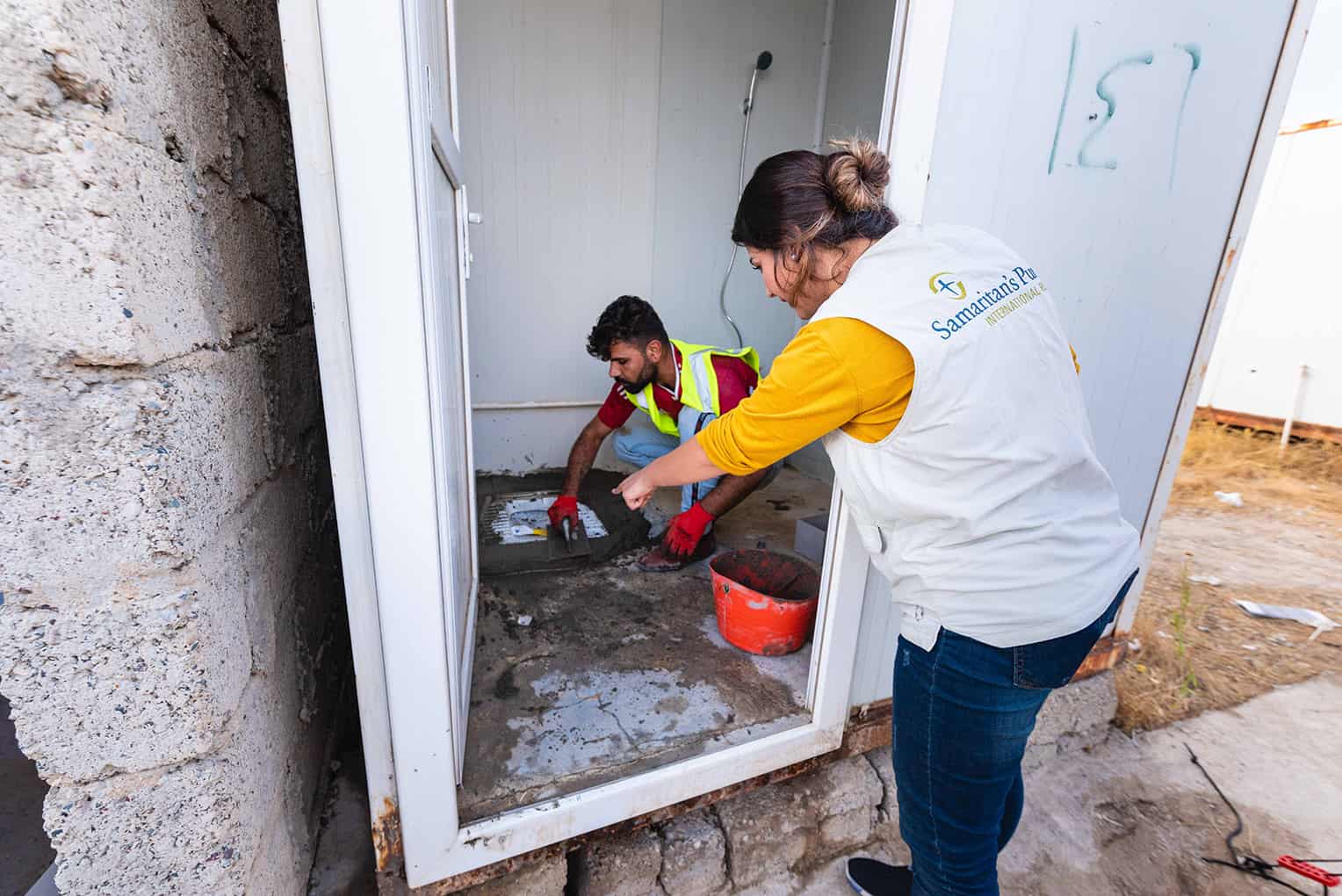 Samaritan’s Purse is repairing latrines in the camp to promote better hygiene during this time of crisis.

Over a period of three days, Samaritan’s Purse worked through a local contractor to repair more than 400 of these latrines.

One refugee named Apo spoke of how much this meant to him and his three sons: “The toilets are very important to us in order for my family not to get sick.” A family’s health is important to any father, but especially Apo. He said, “My family is very important to me—they are all I have left.”

Bombs had landed on his house in Syria and his family walked for 10 days to reach safety in Iraq. “I left everything behind—I left my house, my sheep, and the field that I have,” Apo said. Still, he is grateful. “I don’t have any challenges now. There are no bombs here, no airplanes to kill us. We feel safe here.”

His hopes now are simple: “I want my children to go to school just like normal people.”

Apo is just one of thousands of Syrian refugees that Samaritan’s Purse is serving in Jesus’ Name. “Pray for these refugees to find peace—to find the love of God,” Sipan said.

Samaritan’s Purse continues to look for every opportunity to assist those fleeing the crisis created by Turkey’s incursion into Syria.

“Thousands of families have fled unspeakable brutality in Syria to be met with life-threatening conditions and illness as they resettle in northern Iraq. At Samaritan’s Purse, we’re called to go to these kinds of crises to bring relief, but most importantly to bring God’s comfort and love to hurting people,” said Franklin Graham, president of Samaritan’s Purse. “Please pray for God’s protection as they flee everything they’ve known and for our teams as they bring critical relief to families who are suffering.

“Please pray for God’s protection as they flee everything they’ve known and for our teams as they bring critical relief to families who are suffering.”—Franklin Graham

The area along the Syria-Turkey border (and into Iraq) is populated primarily by the Kurds, who are the world’s largest stateless ethnic group. The Turkish government and elements within the Kurdish community have been at odds—with periodic violence—at least since the founding of the Republic of Turkey in the 1920s. 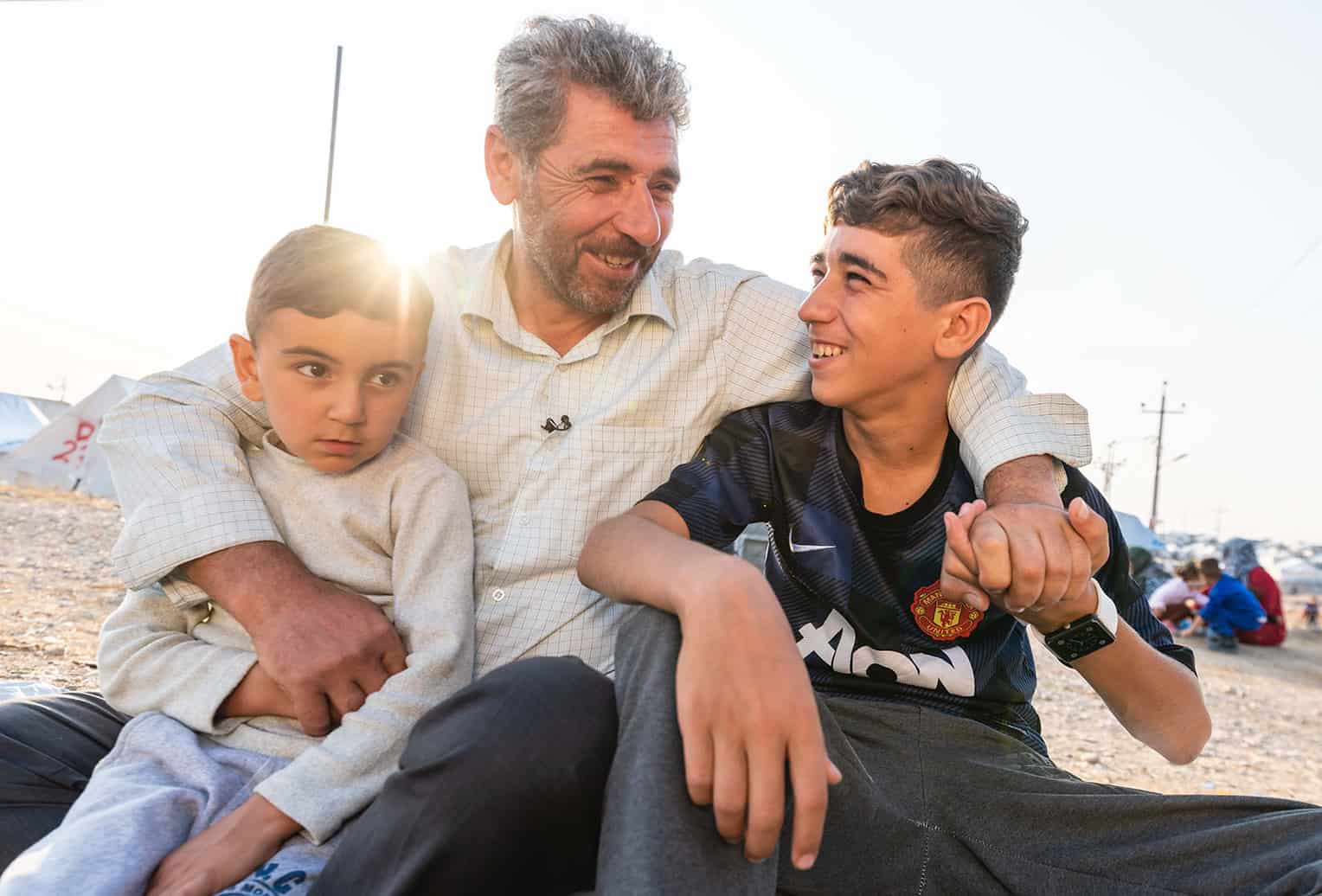 This Syrian family is thankful to have reached the relative safety of northern Iraq.

There are also several Christian communities in this region that date back almost 2,000 years.

In addition to our work in Iraq, Samaritan’s Purse continues to operate through a network of partner organizations to provide critical relief to the thousands of displaced families who remain in northern Syria—letting them know that God loves them and they are not alone.

Please pray for the many Kurds, Christians, and other minorities who are caught in the middle of a difficult situation in Syria. Pray for lasting peace and fair treatment of all in the area.
—

Important Context:
As a five-day ceasefire brokered by the U.S. ended on Oct. 22, a new agreement on the border situation was reached between Russia and Turkey. The agreement, to be implemented by Oct. 29, ends the Turkish invasion and provides the framework for a “safe zone” 30 kilometers wide (18 miles) along the Syria-Turkey border. Among many other details, the pact requires Russian military police and Turkish troops to patrol much of the demarcation line.

Samaritan’s Purse has been working in the Middle East for decades. Among other work, we have an established country office in Iraq, where we have been serving those displaced by ISIS since 2014.

Note: This article was originally published on Oct. 22, but has now been thoroughly updated and revised to reflect the situation on Oct. 28.