Some Iraqi families have fled; others are returning. All need emergency supplies distributed by Samaritan's Purse.

An intense battle rages to liberate Mosul from two years of ISIS terror: Nearly 100,000 coalition troops, led by the Iraqi army and including several hundred American military personnel, are pitted against several thousand ISIS militants. The number of those fleeing the conflict has well more than doubled since November 1, 2016. The latest reports, as of November 9, count over 40,000 displaced people.

Samaritan’s Purse is distributing food to displaced families at Khazer camp, which lies about 25 miles east of Mosul’s center. The camp sits just before the border with Kurdish-controlled northern Iraq, along the main Erbil-Mosul highway, and security is tight. The current population of the camp is around 6,000 or 7,000 people.

Distributions continued November 8 for several hundred more families and will continue as long as new arrivals enter the camp complex. We are working in other camps and will be helping to meet the food needs of thousands of families over the coming months.

Stories of Those Who Fled

Kasem*, a middle-aged father of eight, was among the first in line to receive food. The family left Gogjali, a suburb of Mosul, a few days ago as fierce fighting reached that area. Kasem’s explanation for why he ended up at the camp was simple.

Abdul Rahman*, 62, also received rations for his large family on Monday. He came to the camp recently with his children and grandchildren. 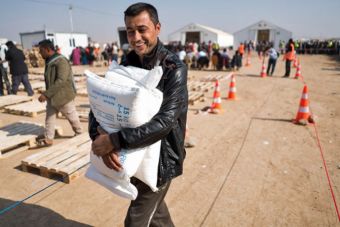 When the bombs got close to his Gogjali home, he knew it was time to flee.

With the Iraqi military’s help and permission, they were able to drive out of harm’s way. They were eventually stopped at the Khazer camp and have settled in. One of the first things Abdul did after escaping ISIS was shave his beard, a required facial feature under their tyrannical rule.

While camp life can be challenging, it’s a vast improvement over his life for the past two years, he said.

“This is better than under the authority of ISIS-1 million percent.” 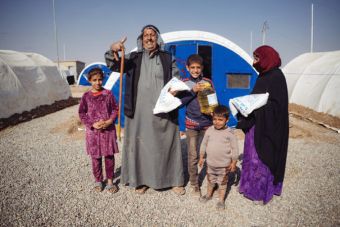 Sixty-two-year-old Abdul Rahman* with some of his family. They received the monthly food ration Nov. 7. He allowed Samaritan’s Purse to pray for him and his illnesses.

In the summer of 2014, Abdul and his family lived in a small village just beyond the Khazer bridge (for which the current camp is named). ISIS overran Mosul in August of that year and stormed east toward Erbil where they met fierce resistance from Kurdish fighters. Abdul’s village was at the edge of the fighting, and ISIS forced his people across the bridge. Then ISIS blew up the bridge and trucked the people west to the edge of Mosul. There they were held hostage until the Iraqi military liberated them over the past week.

One of Abdul’s specific challenges under ISIS was obtaining adequate medical care. He has a long list of serious health problems-heart issues and diabetes are just two among them-and medical treatment was expensive and difficult to come by. A local nurse was able to sneak medications to him and others, but that man was eventually caught by ISIS and imprisoned, Abdul said.

“We don’t know what happened to him.”

The drive to liberate Mosul has cleared ISIS fighters from many small villages on the Nineveh plains. These villages, completely drained of their inhabitants in 2014, have begun to repopulate in the past couple of weeks. Families that fled then are now slowly returning to start over.

On November 6, 2016 Samaritan’s Purse distributed emergency supplies to 54 families in two villages. The citizens there are Kakai, a Kurdish people group that adheres to a little known, mystical, and monotheistic religious system that began in 14th-century Iran. They are not considered Muslims, which put them on the ISIS hit list. 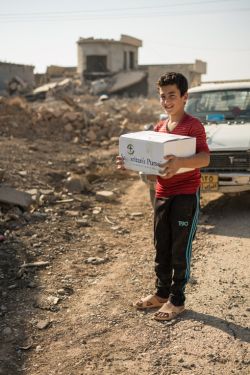 Ahmed is the son of a Kakai village leader and his family recently received relief supplies from us. They have returned home to start over now that ISIS has been cleared from the area.

We were the first organization to provide relief to these returnees. The families received heavy-duty plastic sheeting to cover windows and doors and otherwise patch up things in light of damage caused by war and ISIS vandals. They also received blankets, kerosene stoves, fuel containers, and three days’ worth of ready-to-eat food-crackers, canned meat, tuna, beans, chickpeas, powdered milk, and dates. The biggest concern that the families expressed was their lack of fuel and electricity in light of the coming winter.

“ISIS took everything from this village, and the network for city power is destroyed,” said Kamal, a head of household who received supplies from us. He has a wife and seven children.

Regarding the distribution, he said: “We kiss and appreciate whoever gives his hand to us and helps us.”

Twelve-year-old Ahmed is the son of the village leader, Ibrahim.

“We are nine persons in my family: five boys, one girl, my grandmother, and my parents,” Ahmed said. “We are very thankful that you came and gave us some supplies.”

Ibrahim remembers two years ago when his family fled for their lives with only the clothes on their backs. Now they’re back home, but the village is mostly rubble.

“We’re starting from zero, we’re starting our lives again,” he said. “When I first came back to my village, I thought I was a newborn. This is my great-great-grandfather’s home.”

Ibrahim said this is actually the third time in four decades that the village has been destroyed by violence. He hopes things will change.

“I hope the best for my kids and to grow up in peace in our village.”