Reaching out to child refugees in Iraq 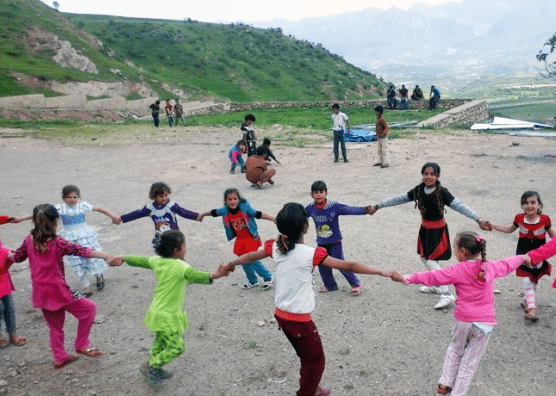 Creating child-friendly spaces in Northern Iraq is one of the many ways Samaritan's Purse is helping displaced people around the world.

June, 2015—There are more than 50 million forcibly-displaced people around the world today. The numbers are the highest since the Second World War and continue to climb, especially with ongoing and increased violence in the Middle East and parts of Africa.

Samaritan’s Purse is focused on providing significant physical and spiritual aid in several countries to both refugees—those who have crossed international borders—and internally displaced people—those who have had to move within their own country.

About half of the world’s displaced people are children. Boys and girls are resilient but need stability to thrive. Good nutrition and hygiene, education, loving caregivers, and the opportunity to simply be a kid are critical for physical, intellectual, and emotional health.

In northern Iraq, which has received up to one million people displaced by violence since December 2013, we are creating child-friendly spaces to help kids recover from trauma.

The following interview with Jessica, our program manager for child-friendly spaces in northern Iraq, was recently conducted via email.

How many children have been displaced by violence in Iraq? Could you describe some of their experiences?

There are 1.3 million children displaced by violence in all of Iraq. Many were in school, but had to flee from their homes to a new place where they couldn’t go to school anymore. Many of the children were trapped on Mt. Sinjar for seven days without food or water. They saw ISIS kidnap and kill their friends and relatives. Some of them were captured, sold and abused in ISIS captivity.

What are their current living conditions?

Some live in large tent camps for internally displaced persons (IDPs)—usually with their extended family, which can be around 20 people. Others took refuge in unfinished buildings and have remained there. Many unfinished buildings don’t have doors, windows, or running water, although some of these improvements have been installed. Others live in rented homes in all sorts of communities, from small villages to bigger cities. It is becoming hot outside and water and electricity shortages sometimes make it difficult for people to keep cool.

What are child-friendly spaces? Why are they needed? How will they help children heal?

The child’s entire world has been completely disrupted. They have lost their home, friends, school and some family members. Many children are not in school and do not have anything to do but sit around and think about all of the traumatic events that they have seen. Many struggle with fighting and act out some of what they have seen. 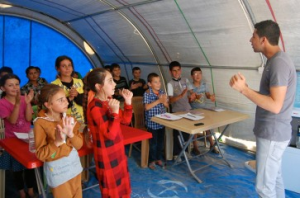 Child-friendly spaces are places where kids can enjoy games and activities.

A child-friendly space is a safe place where they can rebuild relationships and enjoy games and activities  the way  they used to. Children need to create new memories and find stability and normalcy again. This healthy activity will help them heal from and process the trauma they have experienced.

How do we choose a location for a child-friendly space? Who guides the activities at these spaces? How many spaces are we planning to establish in northern Iraq?

We meet with government officials and other organizations to identify the biggest gaps and needs. We also meet with local pastors and see if they have any recommendations. Then, we assess potential locations and meet with the host community, local church, and IDP community to determine if a child-friendly space is a good fit. We also determine if there is a local volunteer pool to help coordinate a program for their kids.

Our team or a Samaritan’s Purse-appointed site manager from the community/church guides programming with the help of other local staff and volunteers. We offer a variety of healthy activities, including sports, games, music and art classes, language and math classes, interactive Bible stories, and more.

We will establish at least seven such spaces in northern Iraq. We have six up and running now.

How have the children been reacting to their new spaces?

The children have been enjoying their spaces tremendously. As the first one was being set up, each day the children who lived closest would come to see what was happening. They helped with cleaning and preparations. Kids who’d never had a chance to learn were excited to take part in the educational aspect of our program. They were grateful to study their alphabet and have a notebook and pencil to call their own. Some children are building up more confidence and courage again. If you visit one of our child-friendly spaces, you will see children smiling, laughing, singing, and playing.

How is Samaritan’s Purse helping children who were captured by ISIS but have subsequently been released?

Throughout our general programming we have distributed jackets, blankets, and heaters to displaced families, including some with children who have been released from ISIS. We have also provided hygiene kits and Operation Christmas Child shoebox gifts to some child returnees. There are children who have been released from ISIS in most IDP communities around Northern Iraq, so it is likely some will be able to use our child-friendly spaces.

Does Iraq have plans for these children to receive formal schooling?

Almost one-third of displaced Iraqi children are now receiving regular education. Camp schools and local schools have been able to take on some new pupils. The government and its partners would like to open up more schools to reach more kids, but sufficient resources are lacking to accommodate all. Many of the children who use our child-friendly spaces have reentered school already; many have not. Our educational activities help but are not meant to replace formal schooling.

How can our supporters specifically pray for internally displaced children and their families in Northern Iraq?

Please pray for displaced children and their families to know and understand God’s love for them and to find true joy, peace, and healing in Him; for continued physical provision, health, and educational opportunities for those escaping the violence; and for families to regain the stability and sense of dignity that has been taken away from them.