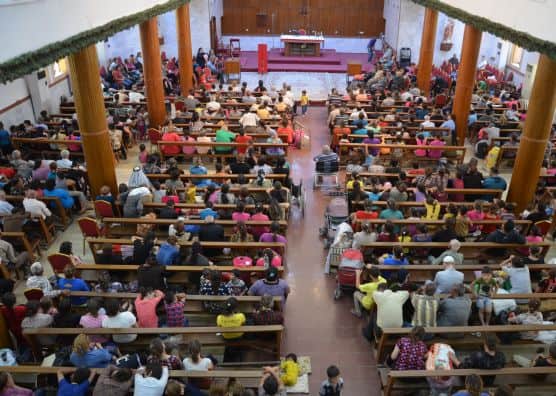 Believers in Kurdistan, Iraq, are in need of the Western Church’s prayers as they serve Muslims, Christians, and Yazidis who have been displaced by the violence of ISIS. Please pray.

February, 2015—I recently spent time with pastors and church leaders in Iraq who are making huge sacrifices to serve those on their doorsteps as a result of ISIS attacks.

More than 1.8 million people have been displaced by ISIS over the last year, and many of them have ended up in Kurdistan seeking refuge. They’ve found it in the arms of the local church.

Several churches I visited are caring for hundreds of displaced families inside and outside their walls. Their sanctuaries and classrooms function as living quarters during the week, with blankets strung up to offer families some privacy. Then on Sundays, these spaces are transformed back into pew-filled auditoriums for service.

Praise God, this compassionate hospitality and the provision of basic supplies from Samaritan’s Purse are impacting hearts for the Gospel.

During one revival service, a Yazidi family walked into the church and up to the stage during worship. They asked for prayer for their daughter—and we were more than happy to oblige. Such an event was simply unheard of before these tumultuous days.

One young, nominal Christian woman experienced full healing of an internal cyst—with medical documents to prove it—following a time of healing prayer. Miracles like that have resulted in repentant people flooding the churches.

I was part of a three-day Operation Christmas Child shoebox distribution during which we handed out 3,000 boxes to mostly Yazidi children. One Yazidi boy in particular took hold of my hand, placed it on his head, and motioned that he wanted prayer. They know there’s something in our prayer—they know there’s something in us, as Christians. We want them to know that ‘something’ is Jesus.

And so Samaritan’s Purse and local partners have provided a variety of relief to those displaced by the horrific violence. Our work continues to grow, and beneficiaries include those from Christian, Muslim, Yazidi, and other backgrounds.

Their prayer requests are as follows:

Thank you for joining Samaritan’s Purse in prayer. We invite you to email info@samaritan.ca informing us of how you, your family, friends, and church are praying for believers in Iraq.