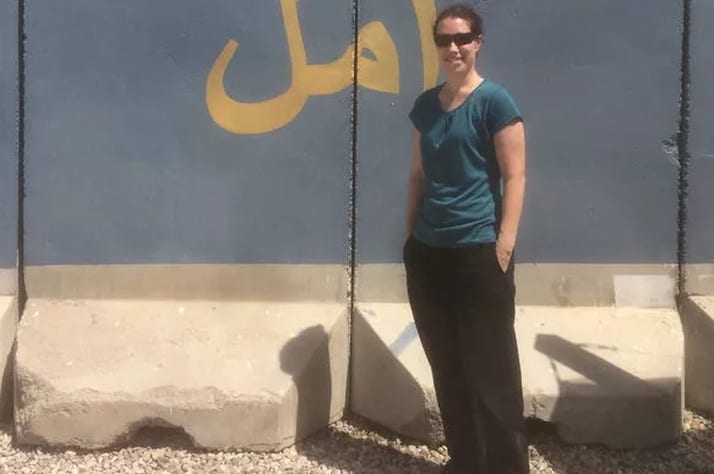 Stacey Horner is a 37-year-old mother of three children and is married to a wonderful supportive husband, Ben. She is also a community care nurse and has worked with Bayshore Home Health for the last 10 years.

The Horners live in Whitefish and are an important part of the Bethel Baptist Church family. This past June, Stacey volunteered to serve on a medical mission to an area a few kilometres south of Mosul (ancient Nineveh), Iraq, which was then being held and terrorized by ISIS militants.

Q. Tell us a bit about Samaritan’s Purse, which organized this medical mission?

A. Samaritan’s Purse is an international relief organization and the 25th largest charity in the U.S. It was started and is still directed by Franklin Graham, the son of well-known evangelist Billy Graham (now 99). This particular project was the deployment of their Disaster Assistance Response Team (DART). This team of medical professionals (mostly from the U.S. and Canada) is ready at a moment’s notice to deploy to disasters. Samaritan’s Purse partnered with the World Health Organization to set up a field hospital 12 kilometres away from the front lines in Mosul, Iraq. The medical staff were treating casualties of war. Over the nine-month deployment, 1,711 major surgeries were performed and 4,185 patients passed through the doors. The field hospital remains in place and has now been transferred to the Iraqi government.

Q. How did you get interested in serving in this ministry?

A. I was working with another ministry of Samaritan’s Purse which many people are familiar with – Operation Christmas Child – which packs and sends shoeboxes of fun and practical items to extremely poor children in Third World countries. I was at an Operation Christmas Child conference in Calgary when the earthquake hit Nepal. This is when I learned of the DART team and had to be a part of it. I later interviewed for the position and went back to Calgary for training. Once on the list you are on call and have the option of deployment when the DART team is deployed.

Q. What motivated you to serve in a dangerous place like Northern Iraq?

A. I was ready and willing to go anywhere to use my nursing to help people desperately in need. When I learned of the location I, of course, thought of the danger but didn’t hesitate to go.

Q. What did you experience during your time there?

A. My three weeks in Iraq were some of the best of my life. On the one hand, I experienced the horrible effects war has on the most vulnerable — women and children. I was working in the ward at the hospital with children referred to us for surgery for gunshot wounds as well as young boys who were accidentally injured playing with an IED. But, amongst all this darkness and hurt there was hope. We, as a ragtag band of Christians from the West, were able to bring love and hope to not only our patients but also our guards and the national Iraqi nurses we were working with. Most Iraqis have never met a Christian before and only know what they have been taught all their lives. We were able to show them what Christians are really like.

A. The biggest challenge had to be the emotional aspect of meeting these sweet children, learning what they have gone through and not becoming overcome with grief. There were a few nights where you have to leave the tent and regain your composure to go back and treat your patients. Their stories are so horrific. Such as trying to console an 18 month-old baby crying for her mom and you know she has died in the rubble of her home. It’s heartbreaking. But the team was always so supportive of each other. The biggest blessing was getting to know and spend time with the Iraqi staff. They are such amazing people. Also, being able to save lives of people, many of whom would not have survived without the field hospital being there. It was amazing to be such a small part of what God is doing in Iraq.

Q. Would you volunteer again?

A. It was an absolute honour to serve with Samaritan’s Purse in Iraq. I look forward to the day when I am redeployed and can serve again wherever that might be.