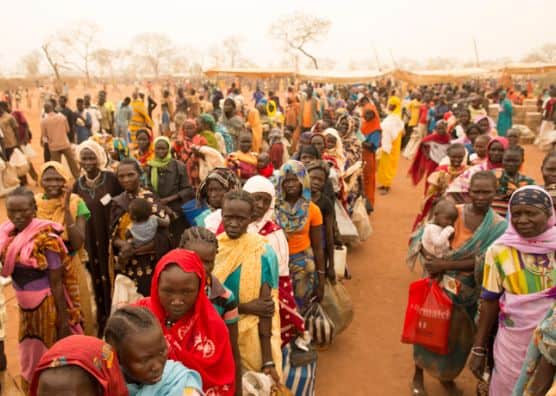 Food insecurity in South Sudan has worsened. Recent rains have been weak, causing harvests to be less than bountiful. Deeply hungry, people are turning to violence to obtain food. As a result, traders are unwilling to risk driving their trucks to deliver food. The future is bleak. See how our staff is helping meet the needs of the South Sudanese people in Jesus' Name.

The sky is blue, not a cloud to be seen, as mothers at the Yida Refugee Camp in South Sudan begin trickling in to the Samaritan’s Purse food distribution site. Some are pregnant; others are carrying their babies and young children. They’re all coming to receive their monthly ration of a special healthy and nutritious food supplement to improve their chances of warding off malnutrition in themselves and their children.

Hamida, a single mother of three children, knows the anguish on the hearts of the other women who have come. She was diagnosed as being malnourished three months earlier. Her youngest daughter was also because Hamida was unable to breastfeed her. 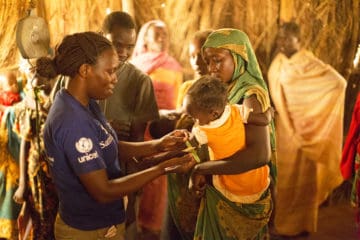 When mothers bring their children to be checked for signs of malnutrition, our staff members take measurements with skill and compassion.

While standing in line, Hamida starts talking with other mothers near her and describes her plight.

“The food we receive here is all we have,” she said. “We do not have any money to buy other food. Yet, one can’t farm here to get such a variety of foods because we don’t have enough land.”

But Hamida also wants to encourage the women. She points to the impact of the monthly food supplement from Samaritan’s Purse.

“I feel confident and able to breastfeed my baby now,” she said. “I have regained strength after eating porridge made from the flour we receive here every month.”

Food Insecurity in the Wake of Unrest

Hamida’s story represents a bright spot in South Sudan’s troubled history since becoming the world’s newest nation five years ago after gaining independence from Sudan. Tens of thousands of refugees still call camps such as Yida “home” after fleeing bloodshed in 2011 caused by fierce fighting in the Nuba Mountains and elsewhere. Many trekked a week or longer, arriving only with the clothes they wore.

Impassioned about helping to alleviate their suffering in Jesus’ Name, Samaritan’s Purse responded to the crisis-and continues to respond. We regularly provide sorghum, split yellow peas, and refined vegetable oil in addition to the food supplements for pregnant and lactating women, such as Hamida.

Food insecurity in South Sudan has worsened this year. Recent rains have been weak, causing harvests to be less than bountiful. Inflation is skyrocketing, and the economy is tanking. Deeply hungry, people are turning to violence to obtain food. As a result, traders are unwilling to risk driving their trucks to deliver food. The future is bleak.

Feeling desperate, South Sudanese are bolting, rushing into surrounding countries, especially Uganda. Over 400,000 have arrived there just since July. Teams of Samaritan’s Purse staff and volunteers are there to serve them and to minister to them.

But we remain firmly committed to our calling to help those still  in South Sudan, as we have been for more than 20 years. 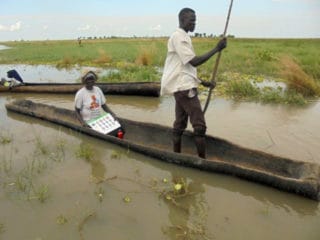 Despite flooding and displacement in South Unity State, Samaritan’s Purse activities continued. The team had to devise ingenious ways of reaching the beneficiaries by use of canoe.

Sometimes when rains come, they arrive in torrents, triggering massive floods in their wake. That was the case in South Unity State. As a result, a team of volunteer mothers involved in our infant and young child-feeding program had to devise an ingenious way of reaching those families benefiting from the outreach.

Used to walking everywhere, the group decided to travel to homes by canoe.

“We are volunteering to save our children, as no other people from outside can do this work,” one mother said. “We are the ones born of this place, thus familiar with the challenges of floods and we know how to adapt to them.”

The resilience of these mothers to reach out to their neighbors to teach them healthy feeding practices speaks to the success and fruitfulness of Samaritan’s Purse within this community as well as others across the country. 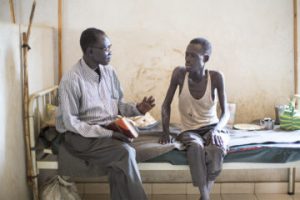 Andrea Baja, a Samaritan’s Purse chaplain at Maban County Hospital, daily visits with patients, praying with them and sharing the comfort and hope found only in Jesus Christ.

Encouragement at the Hospital

We’re also providing quality healthcare in Maban County in Upper Nile State. When breathing became difficult for Philip Tonga Kena, who has suffered from asthma for years, he checked into the Maban County Hospital. Confined recently for more than a month-and with no family or friends coming to encourage him-the 41-year-old Philip grew disheartened. Having committed his life to Jesus Christ years ago, he prayed to God for a word of encouragement.

Soon came Andrea Baja, a Samaritan’s Purse chaplain volunteer. Each day, Andrea walks the floors, comforting the patients. He always prays with them, and as God opens the door, he shares the hope of the Gospel of Jesus Christ. He and Philip have become friends.

“He shares the Word of God and prays with me,” Phillip said of Andrea. “I become happy and encouraged and stay well.”

Though he does not know when he will be released, he’s now strengthened in his faith as he trusts God  for his future. 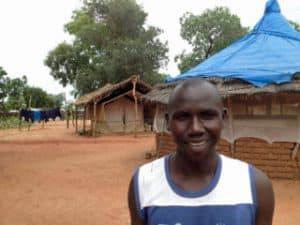 Mahidy committed his life to Jesus Christ after watching the Jesus Film shown by Samaritan’s Purse at the Yida Refugee Camp.

We’re also proclaiming the Gospel among refugees, including Muslims. Mahidy is one of them. Last year Mahidy was a student at the only secondary school in Yida. Hearing about his good grades and noticing his hard work and desire to develop new skills, our area coordinator at Yida spent Saturday mornings teaching the 20-year-old Mahidy different computer programs. He peppered our coordinator with questions about Christianity. Then he began attending showings of the Jesus film held in an open field. God worked in Mahidy’s heart, and he committed his life to Jesus Christ.

Today, Mahidy is working with Samaritan’s Purse at the camp. Recently he shared at our daily devotions, pointing to how God has been changing his heart. Our staff praised God for how He saved Mahidy and how he is becoming a faithful follower of the Lord Jesus Christ.

“The heart of the Gospel is redemptive,” said David Phillips, Samaritan’s Purse regional director for South Sudan and Kenya. “So it’s our desire to proclaim the Good News and help people find Jesus as their Savior and as their Lord.”

“I thank God that we still have the chance to be in South Sudan in time of great need,” he continued. “God still loves them, and we will do everything we can as long as we can.” 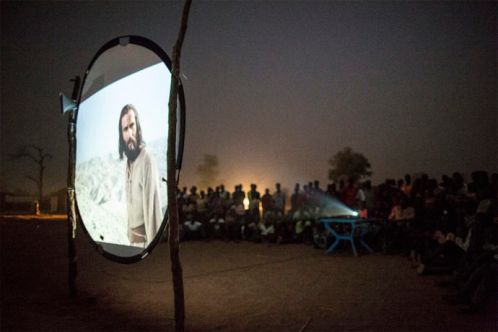 The Jesus Film has been used effectively in communicating the Gospel throughout South Sudan.