Migrants brave perilous journey in hope of a better future 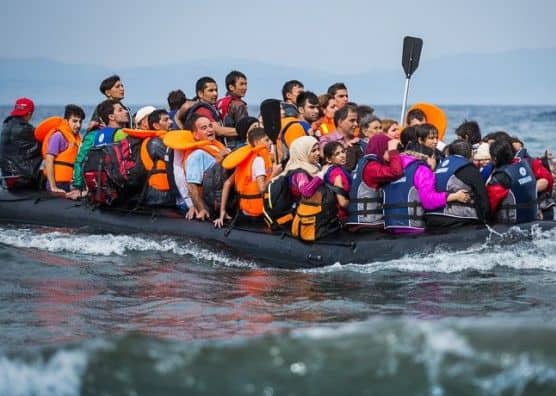 Thousands of new Middle East migrants arrive at the Greek island of Chios. Read from the perspective of a staff member who is on the frontlines.

Sorry there haven’t been any updates from me in recent days. We have been working around the clock receiving thousands of new Middle East migrants arriving at the Greek island of Chios since Saturday. After a brief reprieve yesterday due to high winds and perilous sea conditions, we again had over 1,800 people arrive today.

After almost two weeks working at Souda camp on Chios, this is the first raft (of hundreds that have arrived on the island) that I had opportunity to see up close. This raft came ashore just outside our camp, with more than 40 people on board. This is rare occurrence, as most rafts arrive further south along the coast, closer to Turkey.

Sometimes the winds and current will push the rafts off-course. Life jackets surrounded this cheap excuse for a boat as well as tire inner-tubes which are given as floatation devices for children. Most rafts are grossly overloaded and have barely enough fuel to make the shortest distance between Cesme, Turkey (the departure point) and Chios—despite the fact that each passenger has paid an average of 1,500 Euros (almost $2,200 Cdn) for their ‘seat’.

Many rafts run out of fuel and need to be rescued. One boat today ran out about 500 meters from shore. That forced the men on board to jump into the very cold  water and attempt to swim the boat to shore. They were finally rescued by the coast guard.

This morning we spoke with a young man who was in contact with his family that had been adrift for two days before finally coming to rest on an island 108 miles south of where they intended to be. Through the miracle of smartphones and partnership of translators, we were able to pinpoint their GPS coordinates from another island where Samaritan’s Purse teams are also working and alert the coast guard. They should have been dead, and yet somehow they found shore … and a cell signal!

Men, women, children, elderly and handicapped all board these crudely fashioned rubber dinghies and set sail at great peril for the hope of a better future. I can only imagine the horror they are leaving behind to face such personal risk to  come to  Europe.

I am proud our team is working around the clock in partnership with other agencies to show them they are loved and valued. Even the community here has embraced these temporary newcomers. Local residents pass out sandwiches at registration centers and distribute dry clothes to those who have been drenched in the cold sea water. Doctors remain on call 24/7 responding to everything from severe hypothermia at the beach to infant fevers in a camp.

I am overwhelmed by the resilience of the community of helpers who have come here because they believe that each of these sojourners deserves to be treated as someone of dignity.

Samaritan’s Purse staff work around the clock to ensure a clean, safe place for them to sleep with food, water and blankets. Most of all,  refugees are greeted with a smile and with compassion. Our staff take the time, often overcoming language barriers, to learn stories, share heartache and offer encouragement—even asking them how things could be improved at the camp for future arrivals.

Each new arrival carries a unique story of what compelled them to uproot their family, migrate across a continent, board a poorly constructed rubber raft and cross a perilous sea for the hope of a better future for them and their children.

We have the privilege of serving them in Jesus’ name.