'Life is crippling us' 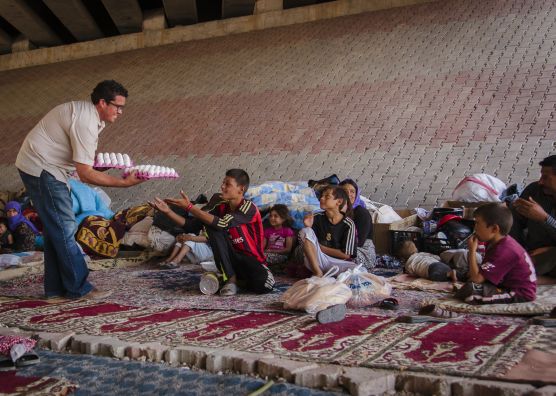 Thousands in Iraq still in limbo between violence of ISIS and an unknown future.

July, 2015—For the first time since the seventh century, no church bells rang in the Nineveh Plain, after ISIS terrorists stormed the region in Northern Iraq last June.

When ISIS invaded Quaraqosh, it forced Sister Catherine,* the rest of her convent and more than 120,000 Christians and other minorities to flee for safety. Most left with only the clothes on their backs as they faced either forced conversion to Islam or death at the hands of ISIS.

“We didn’t have even a half an hour to prepare for the invasion,” she says, adding a missile strike near her convent killed a young woman and two children, erasing any doubts that they needed to flee.

Since the ISIS attack a year ago, little has changed for the thousands still stuck in the limbo of a war behind them and an unknown future ahead.

“Imagine you have thousands of families without work and they have camps made from (shipping) containers or unfinished buildings,” she says. “They’re waiting for aid to be delivered, they’re looking for jobs, but there are no jobs. They want to send their children to school, but they can’t.

“Life is crippling us, we cannot do anything.”

Sister Catherine is urging Canadians to partner with Samaritan’s Purse and support refugees in northern Iraq.

Since hundreds of thousands were forced to seek refuge in the Kurdistan region—where Samaritan’s Purse has a field office—donations by generous Canadians have enabled us to provide hundreds of tents for displaced families and food to more than 14,000.

We have distributed mattresses, cribs, baby clothes, shoes, pillows and Bibles. We are also creating child-friendly spaces where children can recover from trauma.

“Samaritan’s Purse has been on the ground and working so hard,” Sister Catherine says. “They didn’t give up on us… ¦ they have continued to support us. They’re not just supplying people with survival items, they are treating them as human beings.”