Lessons learned from the Ebola Epidemic 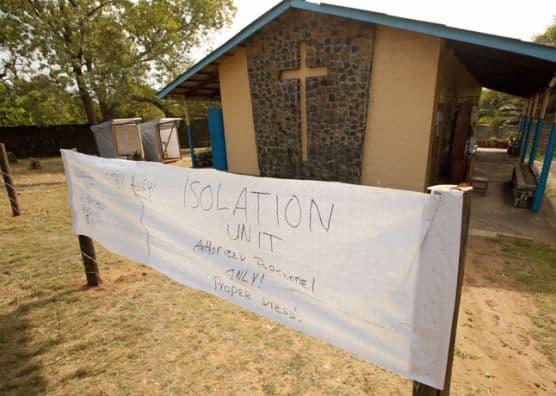 Ken Isaacs shares his thoughts on lessons learned from the Ebola epidemic.

On July 24, I wrote on this blog that the Ebola epidemic was spinning out of control and pleaded with the international community to join my organization, Samaritan’s Purse, on the front lines of the fight against this deadly disease.

Two days later, we received word that one of our doctors, Kent Brantly, had tested positive for Ebola. News of Nancy Writebol’s infection came shortly afterward. In the ensuing days, our team worked to care for Kent and Nancy, evacuate them to the United States, and continue to help Ebola-stricken Liberians at our two case management centers. Tragically, the situation on the ground became so out of control that we were forced to evacuate our expatriate staff.

Kent and Nancy have now recovered and have been released from Emory University Hospital. Upon his release, Kent stated, “I am forever thankful to God for sparing my life and am glad for any attention my sickness has attracted for the plight of West Africa in the midst of this epidemic.” He has definitely attracted global attention to the epidemic, but unfortunately that awareness is still not translating into effective action.

As Samaritan’s Purse and other organizations-most notably Doctors Without Borders-continue to engage in the fight against Ebola, I would like to share some of the lessons I have learned over the past few months.

The international community was caught off guard by this epidemic, and the response remains inadequate to address realities on the ground.

Ebola in West Africa is moving faster than a racehorse. On August 7, I testified before a congressional subcommittee. That night, the U.S. Embassy in Liberia ordered the evacuation of non-essential personnel. The next day, the World Health Organization declared an international health emergency. In the weeks since then, the disease has claimed over 300 lives in Liberia, and at least 100 more in Sierra Leone and Guinea. International experts agree that these numbers are greatly underreported.

The number of infections-and deaths-are increasing so dramatically that few epidemiologists are publicly willing to project how many more may get the disease. Some epidemiological reports I have read speculate that it will be mid-2015 before this Ebola outbreak peaks.

Doctors Without Borders is fighting a tough battle, especially in Liberia.

One 20-bed facility in the remote area of Foya recently had a patient load of 67. Recently, they opened a new 120-bed facility just outside of Monrovia, and reports say it is already overwhelmed.

Donor countries have released some funds as an incentive for non-governmental organizations to begin new programs to combat Ebola in West Africa, which is a good start. The United States Agency for International Development announced that they landed a plane with tons of supplies in Monrovia recently. The military can also play a key role in providing logistical support and airlifting essential items like soap, chlorine, protective equipment and medical supplies.

Last month, the Centers for Disease Control pledged to dispatch 50 emergency responders to West Africa within 30 days. I would not qualify sending 50 people over the course of 30 days as a true “emergency” response.

Liberia has tragically transitioned from an international public health crisis to a complete humanitarian emergency. Normal health care is disrupted and in many places halted. Insecurity and civil unrest is widespread. The World Food Program reports that up to one million people now need food rations. Ebola was the catalyst for this catastrophe, but now these other emergency needs are overshadowing the continued disease threat.

W.H.O., which is widely known for its bureaucracy, infighting, academic perspective and lack of implementation capacity, is the United Nations coordinating body for the response to the Ebola crisis. If they fumble the ball many more lives will be lost.

Local health authorities in the United States lack the knowledge and coordination necessary to deal with Ebola effectively.

As our evacuated staff returned to the United States from Liberia, we found wide discrepancies in how they were treated by local public health departments. One physician was quarantined for 21 days and directed not to leave the interior of the house under threat of a two-year imprisonment. In another area, our personnel were “isolated” for 21 days but only told not to leave the county. They were free to interact outside of their homes. Public health concerns can mean that a doctor serving in Liberia for two weeks may well end up missing five weeks of work.

We need to rethink how we are providing patient care and fighting to contain the virus.

The slum of West Point, adjacent to Monrovia, was under a quarantine enforced by bullets and barbed wire. Not long ago, some members of this community ransacked a temporary isolation ward. Dozens of patients were chased out, and rioters looted mattresses and sheets-the very materials that would be loaded with Ebola virus. No doubt many were infected and are now at home sick, dying or dead.

West Africans are faced with a very hard decision if a loved one gets sick: take them to a center where more than 60 of 100 patients die or try to care for them at home. Many are choosing home care, which means sick people are staying with their families in their houses where they will most likely die and pass the virus to others.

We must explore the possibility of alternative treatment options to help these caregivers. Are there ways to educate them and provide essential materials to improve their chances of remaining uninfected-and perhaps increase the odds of survival for their sick loved one? Samaritan’s Purse is trying to answer this critical question and think outside the box in developing interventions to assist family caregivers.

I share these lessons because I am frustrated about the continued lack of respect for this disease among those who have the best resources to fight it. The problem only seems to garner serious attention when Ebola victims are citizens of a developed nation, like Kent and Nancy.

Those of us who are still witnessing Ebola’s destructive path through West Africa are committed to continuing the fight. We are taking the lessons we have already learned and applying them to new strategies in areas such as ground logistics, the deployment of skilled personnel, the provision of fuel oil, payment of salaries, and the education and engagement of local populations. I admit there are times when the battle feels overwhelming. I pray the international community will immediately and exponentially increase its efforts. There are still lives that can be saved.