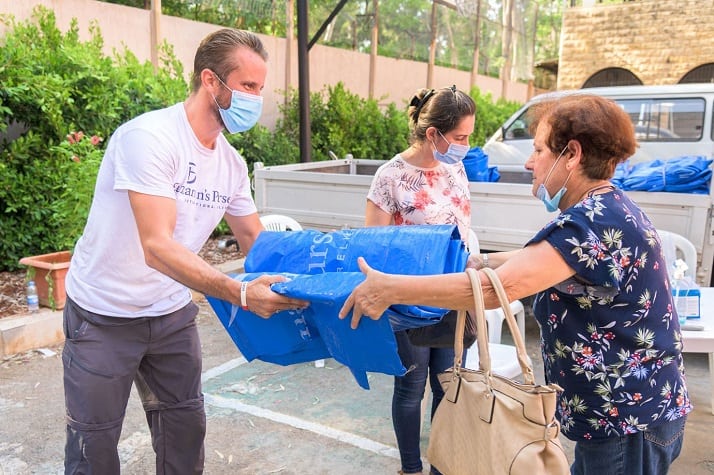 “In the Name of Jesus, we thank you,” *Cyrus said of the critical relief items he was given. “It was a huge explosion. My house is very close to the port; it was a big shock. We fled war in Syria, and we came here. It’s like another danger here for us.” 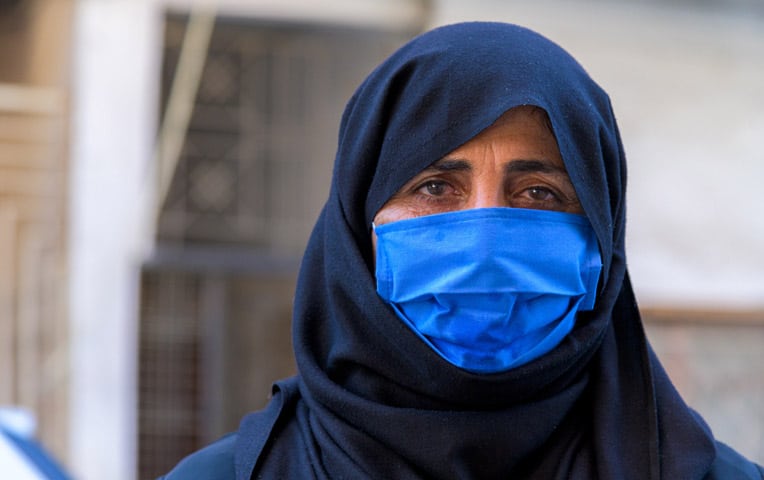 Amira* lives with her husband and 10 children, at least some of whom were quite traumatized by the blast. This latest disaster compounds difficulties they were already experiencing.

“It’s a miserable situation—after COVID, this explosion, and now all the protests in the roads,” she said. “Everything is very difficult for us.”

She is thankful, though, for the kindness of fellow Christians. “No one but Christ and Christians are helping us here in Lebanon. We thank them. We’ve been in Lebanon for two and a half years; no one gave me any help but the church. May the Lord bless them.”

Read below about our first distribution in Beirut on Aug. 13.

—
Abdul* was at home with his son when the shocking blast hit Beirut, Lebanon, shortly after 6 p.m. He ran to find shelter but the explosion caused his front door to unhinge from its post—trapping him underneath.

“All the glass in my house exploded. Twenty-six windows—they all crashed,” he explained. 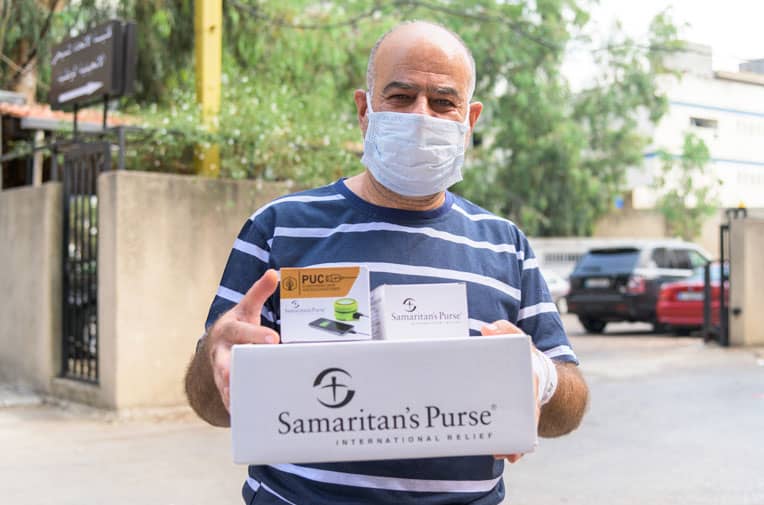 Abdul was trapped underneath his front door after the explosion. He is thankful to God for saving his life.

His family had to pull Abdul from under the destruction. After the effects of the blast subsided, they all gathered together to process the devastation. He and his family worked through the night to clean up the wreckage—covering the windows and removing glass and debris from the home.

Today he received emergency shelter material from Samaritan’s Purse that will help to secure the open window frame. We also provided his family with a hygiene kit and food that will help meet basic needs during this chaotic time.

“I don’t know how to express my thankfulness,” Abdul said. “I just know that Jesus is alive. Jesus saved my life.”

“I know that Jesus is alive. Jesus saved my life.”

Samaritan’s Purse is bringing urgently needed relief to people like Abdul after a deadly explosion rocked Beirut’s port and damaged homes, churches, and businesses for miles around. The blast killed more than 200 people, injured thousands, and left more than 300,000 families displaced. Many families are without shelter, food and electricity.


We deployed our DC-8 cargo aircraft just three days after the blast overwhelmed Beirut—bringing thousands of hygiene kits and solar lights along with hundreds of rolls of emergency shelter material. Today we began distributing critical relief supplies through our local church partners, reaching dozens of Syrian refugee families who are living in Lebanon. 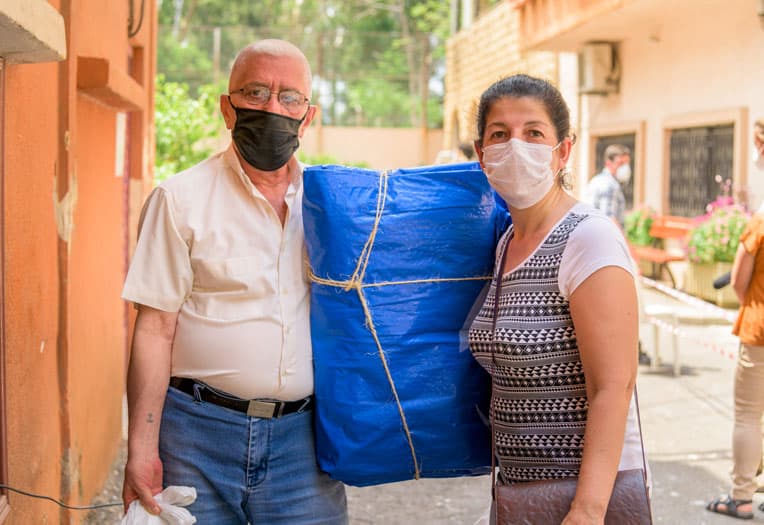 Maral and her family have lived in Beirut for a number of years after fleeing conflict in Syria.

Abdul’s family is one of 39 that received critical relief from Samaritan’s Purse. Each family received heavy-duty tarp, two solar lights, and one hygiene kit. Working with our local church partner, we also provided them parcels of food—including beans, lentils, rice, and oil. These supplies will support them as they continue to repair their homes and recover from the terrible explosion.

Maral and her family also received much needed emergency relief items. After fleeing conflict in Syria, they have been living in Beirut for years. They were sitting together in their apartment when their living room was overtaken by the explosion—shattering the windows and damaging the structure of their home.

When more than 2,000 tons of ammonium nitrate blew up at the Beirut port, the eruption created damage spanning more than 12 miles from the epicenter—destroying homes, hospitals, medical supply warehouses, schools, and food storage facilities. Reports are showing that this blast was the worst explosion in Beirut’s history, including those that occurred during its civil war (1975-1990). 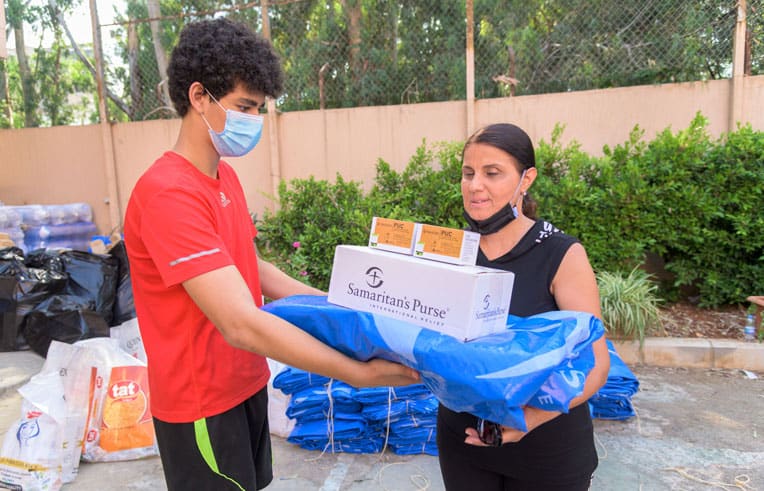 “What happened here in Beirut terrified us, because we thought we were in Syria again,” explained Maral. “It reminded us of all the things that we have lived. I thank God that my family is OK and nothing touched them.”

Maral and her family are praising God for protecting them during the explosion. Her husband is unable to work due to a health condition so the family is currently without regular income. The relief supplies they received will help them survive.

“Thank you from the bottom of my heart,” Maral said.

Families Praise God for His Protection

Our teams are bringing urgently needed aid to families in the most devastated areas of the city thanks to our partnership with the local church—reminding families in Lebanon that they are not alone or forgotten. Amal and Dasia are receiving support through the church, and they praise God for His protection during the devastating blast. 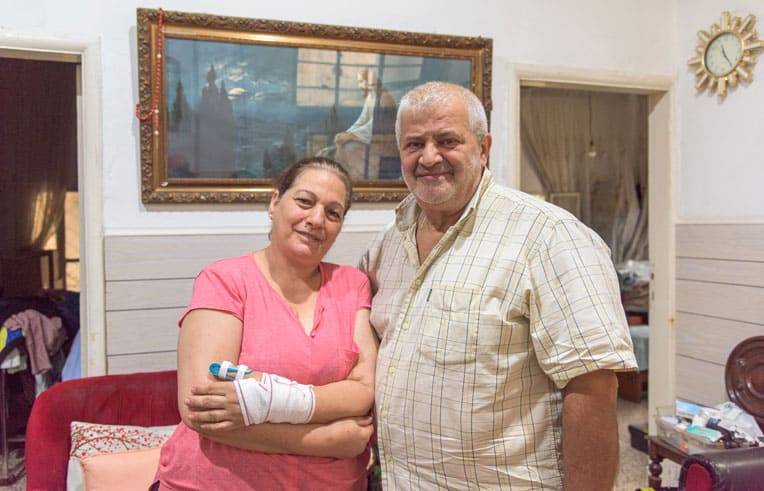 Amal and Dasia are among the beneficiaries who received emergency relief items.

Amal and Dasia are from Beirut and the two were at home visiting with their 28-year-old son when the deadly explosion occurred. Amal is a former carpenter and he has lived in the same family home since 1976; he and Dasia have been married for more than 40 years.

“God is the one who protects us. My faith in Christ gives me life today,” said Amal with assurance. “We’ve experienced many troubles now, several times. Indeed, it is really terrible. It is important to pray. The church here has great effects, and Jesus is here in this city.”

Samaritan’s Purse will continue working alongside our local church partners to help families affected by this disaster. Our staff members also have been careful to implement COVID-19 safety protocols for our work as we deliver much needed relief.

Please pray for Beirut families who have lost so much, and pray for our teams as they are helping in Jesus’ Name.

*All names changed for security.