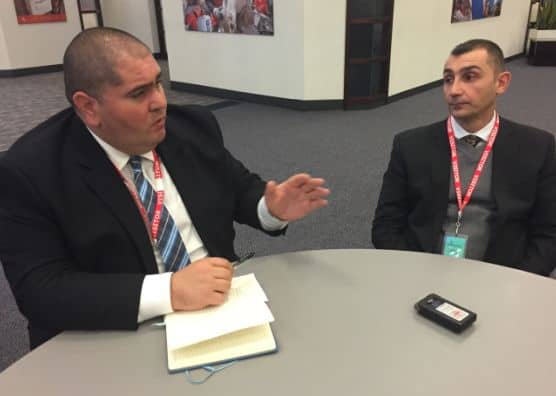 A pastor who lives and works close to the embattled Iraq city of Mosul thanks Samaritan's Purse for its relief and development work in the war-torn region.

A pastor who lives and works close to the embattled Iraq city of Mosul is praising Samaritan’s Purse for its relief and development work in the war-torn region.

“We feel we are not alone.”

Pastor Baythoon, who has helped Samaritan’s Purse with relief projects in the northern Iraq region of Kurdistan, brought Kurdistan government official Khalid Talia with him to tell members of the media about the current situation in Iraq.

Khalid, Kurdistan’s Director General of Christian Affairs, said in the past five years, more than 1.8 million people have fled from Iraq and Syria to Kurdistan, which is a semi-autonomous region in Iraq. Many of those people are Christians who, along with people of the Yazidi tribe, have been violently persecuted by ISIS terrorists.

“Thank God there are no Christians living in tents in Kurdistan,” said Khalid. “Many organizations have helped them find apartment and homes. On the very first day they arrived (in 2014), Samaritan’s Purse was there to help.”

Samaritan’s Purse has worked with Christian partners in Iraq since the late 1990s. We opened an office and brought in full-time staff in 2007. Since then, we have:

With Iraqi and Kurdish forces now fighting ISIS to regain control of Mosul (which is less than an hour’s drive from where Malath and Khalid live) Samaritan’s Purse is distributing bottled water, blankets, hygiene kits, and cooking kits to residents desperately trying to avoid getting caught in the crossfire between the liberation forces and ISIS.

Despite the turmoil, Malath has hope for the region.

“Our Lord Jesus said ‘love your enemy,’ so this is an opportunity not only in Iraq, but all the Middle East,” he said.

“And even though this is a very hard time, I’m optimistic. When we see Samaritan’s Purse and churches around the world standing with us, this is giving a lot of hope to the people.”

You can help bring that hope to war-weary Iraqis through your prayers and donations to Samaritan’s Purse. As we provide physical help, we can tell people “Through him [Jesus Christ], we have also obtained access by faith into this grace in which we stand, and we rejoice in hope of the glory of God”  (Romans 5:2, NKJV).