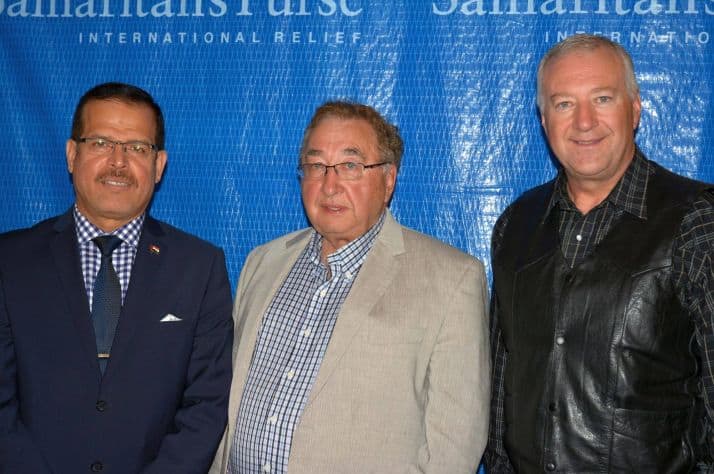 Iraq’s ambassador to Canada visited Samaritan’s Purse Canada’s headquarters in Calgary in July to thank us and our donors for saving lives and easing suffering in the war-torn Middle Eastern nation.

“Thank you very much for helping the people of Iraq,” Ambassador Abdul Kareem Kaab told Samaritan’s Purse Canada staff, including Executive Director Fred Weiss, plus board member Jack Neufeld. “We hope in Iraq, with your help, we can build a great future.”

“What you see happening in Iraq (through Samaritan’s Purse and its Canadian donors) is an expression of love from the Christian community,” Neufeld told the ambassador. “We’re honored that you’ve come to see us and honored that we can help your country.”

“The honor is mine,” a smiling Kaab responded.

Samaritan’s Purse has been in Iraq since 2007.  In just the last three years, generous Canadian supporters have enabled us to provide physical and spiritual aid to almost 124,000 Iraqis fleeing persecution by ISIS terrorists. This includes:

”It’s a very good and amazing thing to have these kinds of hospitals” where Samaritan’s Purse medical staff are treating everyone, including suspected ISIS terrorists, Kaab said. “If we don’t deal with everyone mercifully, we’ll be fighting forever.”

“I appreciated the ambassador’s visit and his interest in the efforts of Samaritan’s Purse to assist people in Northern Iraq,” said Weiss after the meeting.

“While there has been much need due to the conflict in Iraq, the ambassador pointed out the great need going forward to rebuild and resettle people who were driven from their homes; including religious minorities like Yazidis and Christians.”

You can be part of building a better future for Iraq and the Middle East through your prayers and financial partnership with Samaritan’s Purse. Please join us in this effort to show all people the love of God, who “did not send his Son into the world to condemn the world, but in order that the world might be saved through him” (John 3:17, ESV).