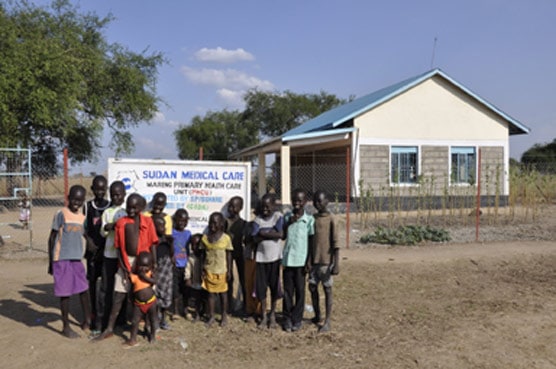 January, 2013—Life has improved considerably for thousands of South Sudanese people, thanks to the completion of a project that saw Samaritan’s Purse build hospital wards and medical clinics in five communities in this impoverished African nation.

The project was born out of an award-winning initiative between Samaritan’s Purse and the University of Calgary in 2006, which initially equipped 15 Sudanese-Canadian physicians to return to South Sudan to practice medicine, and now provides them with education and support as they serve their people.

The doctors discovered enormous hindrances to their work when they arrived back in South Sudan: poorly maintained facilities with minimal equipment and supplies, entire communities that lacked medical knowledge, and a largely non-existent education system  to help them maintain their skills.

But with financial support from the Canadian International Development Agency, not only have six facilities been constructed, but nine medical training camps have also been offered to these physicians.

Dr. Ajak, one of the physicians who was trained through the project, left Sudan when he was nine years old. He fled to Ethiopia where he was given military training and an AK47, but in a miraculous turn of events, narrowly missed serving as a child soldier in Sudan’s civil war.

Today, he is one of only about 100 doctors serving on the front lines of South Sudan’s medical field.

“If I die, I will feel happy that I was going to save the life of somebody else,” said Dr. Ajak. He recently saved the life of a mother despite sustaining several fractures in a motorcycle accident on his way to treat her.

Committed, educated physicians along with safe, equipped facilities are a winning equation in the world’s newest country. In South Sudan, more than nine million people are in need of improved medical care, lacking even the most basic of services.

Now, many people needing medical help have more certainty of finding functional facilities with staff ready to help them.

“We love this clinic and know it is well-built. It hasn’t cracked,” said community leader Malaak Ayuen at their clinic’s dedication in the town of Mareng.

“Most buildings crack from poor foundations and a lack of solid soil to build upon,” explained Samaritan’s Purse Projects Director John Clayton, who oversaw our portion of the project and was present for the recent ribbon-cutting ceremony.

“Much of the cost of these clinics is buried below the ground in the foundation, holding it all together,” he added.

Also holding the clinics together are the prayers and gifts of our generous donors, who understand the need to “dig down deep and lay the foundation on rock” (Luke 6:48b, NIV). Your gifts are still needed to help us continue supporting health workers like Dr. Ajak. 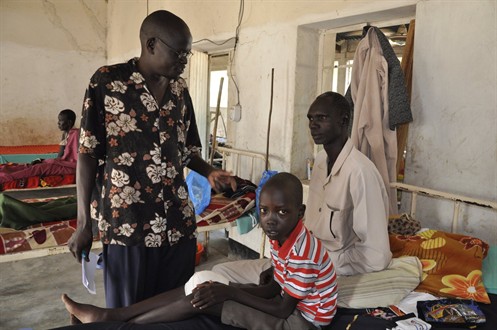 A Sudanese-Canadian physician, Dr. Mabior, treats Deng, a young patient at Bor State Hospital in South Sudan. Deng was first treated by a traditional healer, who caused Deng’s knee infection to worsen by cutting his leg open. Please pray that Deng will receive the healing he desperately needs.