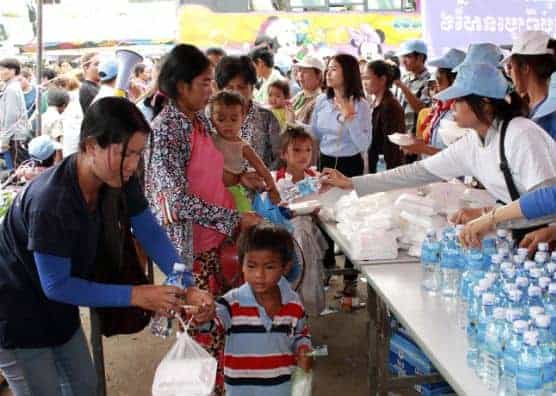 As thousands of Cambodians rush to cross the country border from Thailand, Samaritan’s Purse is working to meet their needs. Andrew Conard works with Samaritan’s Purse in Cambodia as a water, sanitation, and hygiene program manager, and reports on the situation here.

Andrew Conard works with Samaritan’s Purse in Cambodia as a water, sanitation, and hygiene program manager.

June, 2014—In my three years in Cambodia, I’ve never seen anything like it.

I’m working at the Samaritan’s Purse distribution point set up at the Thailand-Cambodian border in Poipet to provide food and water to the more than 100,000 Cambodians returning home. I think about how Moses led the Israelites out of Egypt and imagine it felt similar to this: a chaotic mess of traffic mixed in with thousands of people flooding the streets, bringing only whatever belongings they can carry in their hands.

Around 400,000 Cambodians work in Thailand, seeking better economic futures than their home country can offer them. However, many cannot afford the documents to migrate legally, and a large percentage is in Thailand illegally, without passports or work permits. One of Samaritan’s Purse Cambodia’s largest projects is Safe Migration and Trafficking Awareness, working to equip and educate Cambodians to migrate for work legally and to know if they are in a potential trafficking situation.

Emergency Response In Cambodia: Samaritan’s Purse is providing relief for thousands of Cambodians fleeing from Thailand

On June 11, the safe migration staff members were alerted that thousands of Cambodians were returning from Thailand. They left their yearly retreat early to assess the situation. They found the border teeming with people as trucks filled with returning workers arrived. Many had no food, no water and no money to buy either.

They fled their homes in Thailand when they heard the ruling Thai military junta had decided to crack down on illegal workers. Rumors of violence fueled their fear, and the trickle of workers crossing the border—normally around 150 per day—snowballed to a high of 45,000 workers on   June 14. Just under half are women and children.

The staff set up tents to shelter the workers from the monsoon rains and began handing out emergency food, water packets, and trafficking awareness brochures. They were joined by other organizations and by Samaritan’s Purse community volunteers. They also handed out hygiene kits with toothbrushes and wet wipes—a critical need when workers have  been traveling for days with no access to clean water or toilets.

Here in Poipet we’re seeing thousands of men, women, and children shipped around like cattle. Many have already traveled a couple of days to get to the border and have even slept overnight on the Thai side, waiting to cross over.

Trucks, vans, and buses kept coming—about 300 per day. The number of people crossing back into Cambodia is tens of thousands per day. Here they   wait, sometimes all day in the hot sun with little or no shelter.

As soon as the trucks stopped, people were helped off and brought through our distribution line for food and water. After that, the hard part was figuring out where to go next. The Cambodian military has brought fleets of transport trucks to Poipet, taking people back to their home provinces. They are now even using dump trucks to transport people. But  those needing transportation far outnumber the available resources.

That night, thousands were left at the border with nowhere to go—hungry and exhausted. Some found a piece of wood pallet to lie down on, others a cardboard box.  They need more temporary shelters, mosquito nets, hygiene kits and portable toilets.

Yet there were many positive things. Hundreds of volunteers, Many of them were from local businesses and churches,  showed up to help distribute food and water.  It was awesome to see the community come together to help these people in a difficult situation. The Samaritan’s Purse staff members are all eagerly working long hours with joyful smiles.

I hope the Cambodians are able to find a place to go home. It’s going to be hard for this many people to find work—that was the reason they left Cambodia in the first place. They return to villages already burdened with poverty and lack of jobs. I have already heard some discussing when they might be able to return to Thailand, knowing all too well what awaits them back home.

Please pray for the Cambodians, that their needs for shelter, food and safety will be met; that our staff would be able to maintain energy and focus during long days, and that God would use this mass exodus to share Jesus with them and rebuild Cambodia.