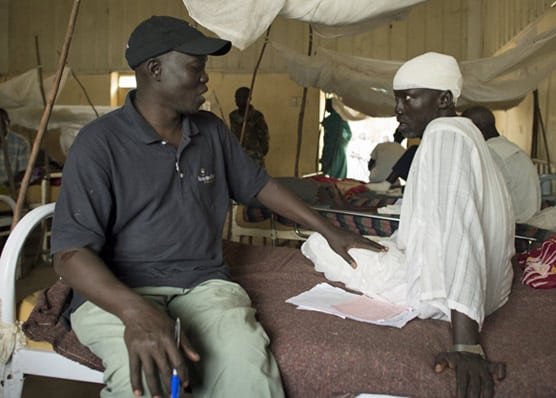 Supported by Samaritan's Purse, Bunj Hospital in South Sudan breaks ground on an expanded facility that will help save countless lives in Jesus’ Name.

Dave Holzhauer was at a bit of a loss.

As the area coordinator for Samaritan’s Purse in Maban County, South Sudan, he was hosting heads of local and national governments, United Nations officials, and the refugee council leader. All of them were on hand to help break ground on a multimillion dollar project to significantly expand the facilities of Bunj Hospital.

The problem was, this ceremony was impromptu and Dave had not prepared a formal presentation for the event.

Facing the heat and the expectant eyes staring at him, Dave did what Samaritan’s Purse field staff are trained to do in a challenging situation. He thought of a solution and acted quickly.

“I saw this pole—a  stick actually—on the ground and decided to utilize it,” Holzhauer said. “I held it up and was trying to think of what to say with it.”

That is when God intervened and gave Dave the words he needed.

“I proceeded to explain how these poles are the foundation of Maban,” Holzhauer said. “They [are used to] build houses, stores, and today, with this pole, we are building a new expansion on the hospital.”

His words were simple, but the message this project conveys to the people of Maban County is more than any words can convey.

“This expansion is a symbol of hope, of us coming together to build something that will help both the refugees and the host community,” Holzhauer said.

Bunj Hospital is adjacent to the Doro refugee camp, where Samaritan’s Purse is providing food, shelter, clean water, and healthcare to more than 45,000 people who have fled violence around their homes in Sudan. It is the only healthcare provider in  Maban County that offers  more than basic services—namely specialized surgical care and life-saving nutritional programs.

The hospital has about 60 beds, but often accommodates more than 100 patients, using cots and mattresses laid out on the floors.

Dr. Lance Plyler, emergency medical response manager at Samaritan’s Purse, attended the groundbreaking ceremony. He was in Maban assessing how the building project would impact the hospital and what additional staffing and services would be required after its completion.

The hospital functions as a referral facility for primary healthcare centers operated by other partners in the four refugee camps in Maban County and the host community. The next closest facility  offering surgical services is Malakal Hospital, which is inaccessible for most of the rainy season. Even in the dry season it is a seven-hour drive from Bunj.

Samaritan’s Purse began operating Bunj Hospital in January 2012. Since then more than 600 life-saving surgeries have been performed. Most of the operations have been conducted by the only doctor on staff at the time, Dr. Evan Atar. He was working or on-call 24 hours a day. But Dr. Atar now has the help he needs.

“With this expansion, we have increased our full-time medical staff,” Dr. Plyler said. “We have added two more doctors, a nursing staff director, and a nurse midwife. We’re also employing more nurses and lab technicians from South Sudan.”

Maban County has a population of  over 200,000, including  more than  110,000 refugees.   The men, women, and children in the area have a poor understanding of healthcare and hygiene, which means otherwise preventable diseases such as malaria, diarrhea and acute respiratory infections are rampant.

Many patients don’t seek medical help until their illnesses are advanced. The improvement of Bunj Hospital is meant to help change that. The expansion  will enable  the staff  to effectively treat more patients, while sharing with them the healing power of God’s love.

“We are the only ones here to help them, and we are the only witnesses for Christ among these people,” Atar said. “Jesus gave His love to us, without asking for anything in return. Here, we do just a little to help, but God is with us. We can’t do anything by ourselves.”

A bright future can be hard to see  in Maban County, but Bunj Hospital stands as a pillar of hope for the sick and afflicted.

“We’ve been working hard to get to this point—many proposals, budgets, meetings, and pleas for funding have been made,” Holzhauer said. “We’ve been blessed to work with partner agencies like MSF, Medair, UNHCR, and the Ministry of Health to create something that saves and enriches  lives.”