Hope amidst the Middle East heartbreak 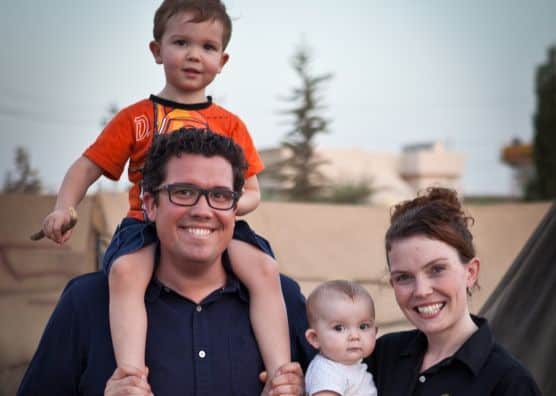 November, 2014—At first, the request seemed strange and unreasonable. The man asked Matt for money to buy a cellphone. Matt, Samaritan’s Purse’s Iraq country director (pictured above), said no because he was busy making sure displaced people in the northern Iraqi city of Erbil were provided with beds, hygiene items and other necessities.

“Then the man told me, “If you help me buy a cellphone, I might be able to find my daughter.”

Matt, a father of two small children, did get the man a cellphone. But as he recounted the heart-breaking interaction, he had to stop and compose himself. Samaritan’s Purse has responded to this kind of misery every day since ISIS terrorists began a blood-thirsty war in Iraq and Syria in early 2014.

As Christians and those Muslims who didn’t fit the fundamentalist ISIS group’s definition of Islam fled the savage killings and kidnappings, they poured into Erbil and the larger area of Kurdistan. Usually, they arrived with nothing but the clothes they wore—and often missing family members who they may never see again.

Kurdistan, an area in northwestern Iraq over which ethnic Kurds still have at least some control, is where Samaritan’s Purse and our church partners have been helping displaced people. The displaced include the elderly, the sick, the disabled, and thousands upon thousands of small children and infants.

So far, generous donors like you have enabled us to provide:

“Right now, things are stable and we feel safe,” said Matt, who paused the cellphone interview while his vehicle went through a security checkpoint. He and his wife Sarah have lived in Iraq since 2010 and since then have had two children, Ezra and Macy.

Despite the displaced people’s relative stability and safety, Matt says “there’s a lot of psychological trauma; many people have lost family members.”

Christians want to get out

And among minority groups like Christians, “they’ve lost faith in the Iraqi government. They don’t want to talk about restoring anything; they talk about getting a visa to get out. There’s an exodus of believers right now and that’s not a good thing for long-term Christianity in the Middle East.”

Even with this sobering reality, Matt noted the situation presents “an unprecedented opportunity to share the Gospel. This is the first time we’re aware of an opportunity like this to sit with people and pray with them.”

That’s why he wants Canadians to support Samaritan’s Purse through prayers and financial donations. There is much, much more work to do with an ever-growing group of desperate, displaced Iraqis.

“And pray for a continuous open door amongst Muslims and people who have no faith in God,” said Matt.