God's servants are at work in Iraq 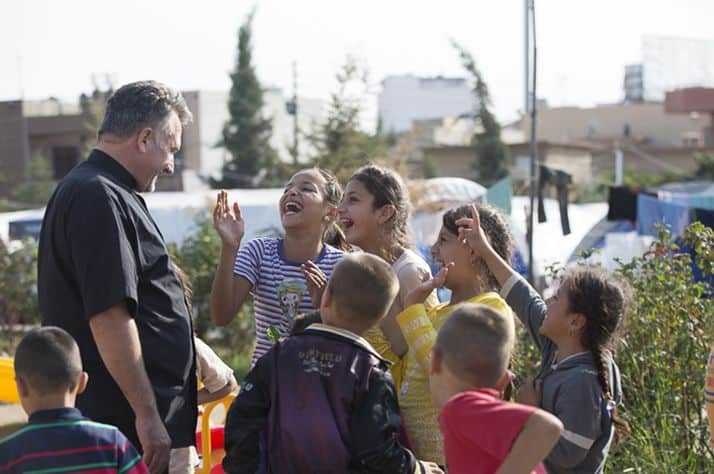 Randy Bishop is a senior writer for Samaritan’s Purse. He recently traveled to Iraq to cover our relief work.

Samaritan’s Purse makes it a priority to partner with local churches wherever we work. Meeting those partners on the field is one of the highlights of my job. I’ve been blessed to meet God’s faithful witnesses in the Philippines, South Sudan, Haiti, and Vietnam. After meeting them, I’ve returned home reinvigorated to sacrifice and encouraged to know God’s Kingdom is expanding.

Most recently, I got to meet my brothers and sisters in Iraq, where Samaritan’s Purse is partnering with believers to provide relief both to Christians and non-Christians. This past summer, thousands of Islamic State jihadists took over significant portions of Iraq. In late June, they took Mosul, which had a significant Christian population, and, several weeks later, they rampaged through some surrounding Christian villages. Thousands of families fled to areas in and around Erbil and Dohuk, where many Christians were already living. 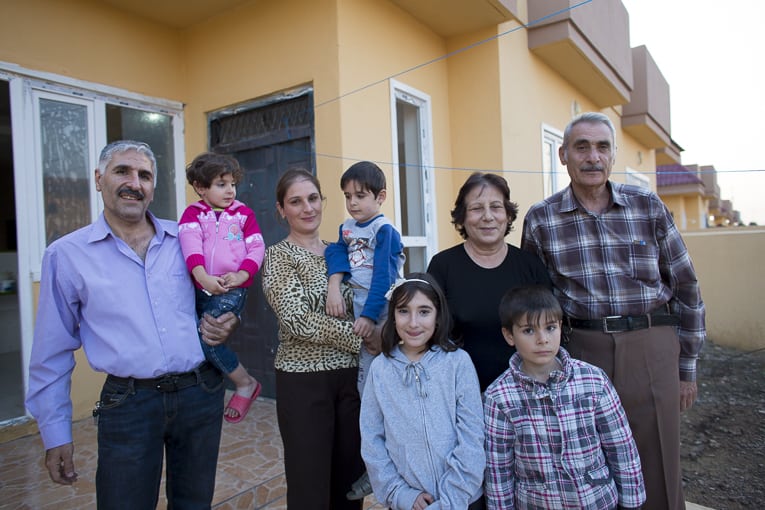 This Iraqi Christian family from Mosul (site of ancient Nineveh) is just one of many who have had to flee from ISIS and start their lives over again. A great number of Christians in Iraq are ethnic Assyrians, identifying with the ancient Near Eastern empire of Assyria (900-607 BC) to whom God sent the prophet Jonah.

Christians here trace their faith back to biblical times. Some still speak Aramaic—the language spoken by Jesus and found in certain sections of the books of Daniel, Ezra, and Jeremiah. It’s widely believed that the Apostle Thomas brought the Gospel to Iraq a few decades after Jesus’ death and resurrection. Although the number of Christians has dwindled to fewer than 500,000, they are committed to their faith in the face of persecution.

I got to know  just a few faithful local servants who work on our staff or act as our partners, but I found each to be remarkable. There are sisters, some of whom had dodged ISIS bullets themselves, who are now taking care of widows and families in Erbil. There are young brothers, who lost nearly everything in their flight from Mosul, who are working hard with us to serve their fellow Christians as well as people of other religious backgrounds.

Many of our co-laborers in Iraq made an impression on me. Here are a couple of sketches that illustrate the character of these people and the fiber of Christianity in Iraq.

Watch: Displaced people in Iraq are forgiving those who have harmed them

Father Douglas oversees a displaced persons camp at St. Elia church in Erbil. About 200 families fled to the church in early August after the fall of Qaraqosh, a Christian town just outside Mosul. Samaritan’s Purse has coordinated with Douglas to provide the families with a large power generator, multi-family tents, bunk beds, gas cooking stoves, kitchen kits, mattresses, and more. 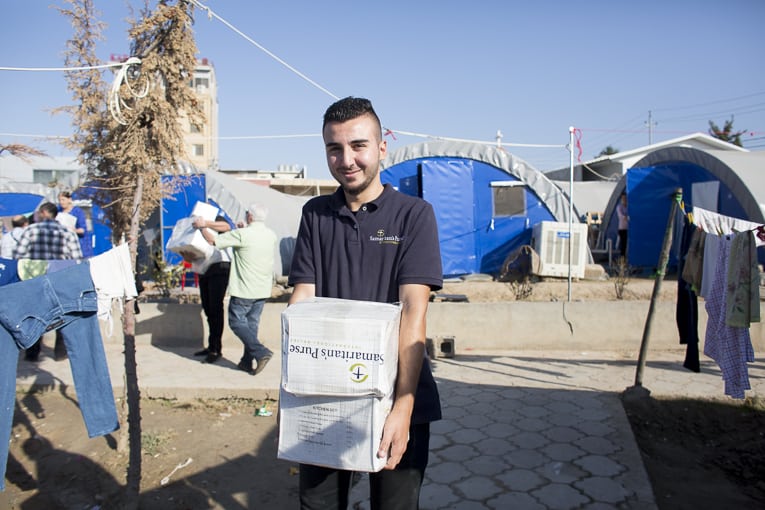 Many of our local staff have themselves been displaced by ISIS. They are now serving others in the Name of Christ.

“We will never forget those who help us,” he said.

It only takes a few minutes around Douglas to see that his smile is a gift that lifts the spirits of men, women, and children in the camp.

He laughs with the children; he works hard to get everyone what they need.

“As Christians, we are not just for good days, but [also] for bad days,” he often said.

Douglas’s personal trials prove his no-complaints outlook is more than empty words. He had a worship service in Baghdad interrupted by five missiles. He’s been shot and still has the bullet in his leg. He’s been kidnapped for nine days. His assailants broke his nose and some of his teeth. Nevertheless, he focuses on others.

“We [Christians] are still like salt and light,” he said. “We are few, but we are making a difference.”

He says even Muslim minds are being changed by the perseverance and giving of Christians. Yet, he also issued an honest assessment of the situation today in Iraq.

Samir:  a friend who knows his source 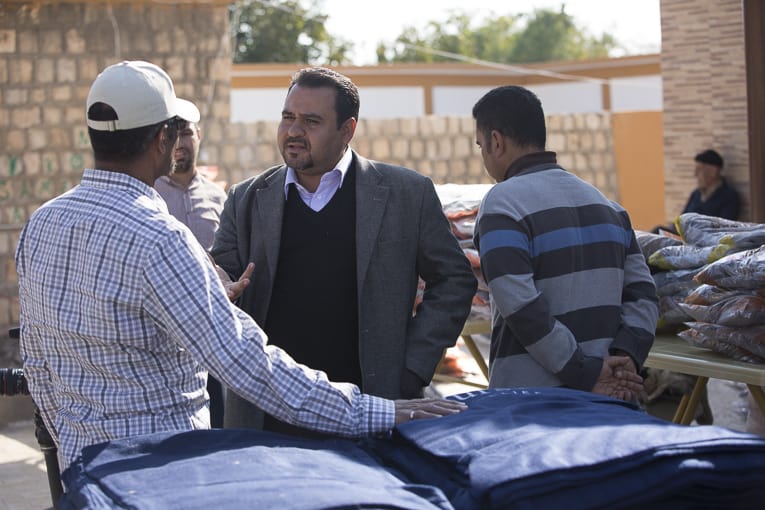 Pastor Samir is a spiritual leader in the countryside of Dohuk. He has helped us organize distributions to those in need.

Outside of Dohuk, in the village of Enishke, I met Father Samir, whose name in Arabic means friend. True to his name, he’s a warm, jovial man, who has facilitated the distribution of various relief items from Samaritan’s Purse to several hundred displaced families seeking shelter wherever they can in the surrounding hills. About half are Yazidis who fled Sinjar, and most of the others are Christians, with a few Arab Muslims mixed in.

When I met him, Samaritan’s Purse staff and local church members were distributing jackets and blankets to almost 100 families, mostly Yazidis, in the courtyard of a kindergarten located just below one of Saddam Hussein’s crumbling former palaces. After the distribution, some of Samir’s flock, including families from Mosul who are now living in the school, prepared us a hearty meal and Samir taught a few Aramaic phrases.

The pastor sees hearts changing as Christians reach out in love. He said he’s had beneficiaries of different backgrounds tell him, “Without Christian support, no one would take care of us.”

“Many Christian groups are coming… to [Iraq to] show the presence of Jesus Christ,” he said. “I want to thank Samaritan’s Purse and all those who are working to support us.”

Discussing the current situation in Iraq, he referenced the story of Joseph and his well-known statement to his brothers, “You meant evil against me; but God meant it for good, in order to bring it about as it is this day, to save many people alive,” (Genesis 50:20, NKJV). 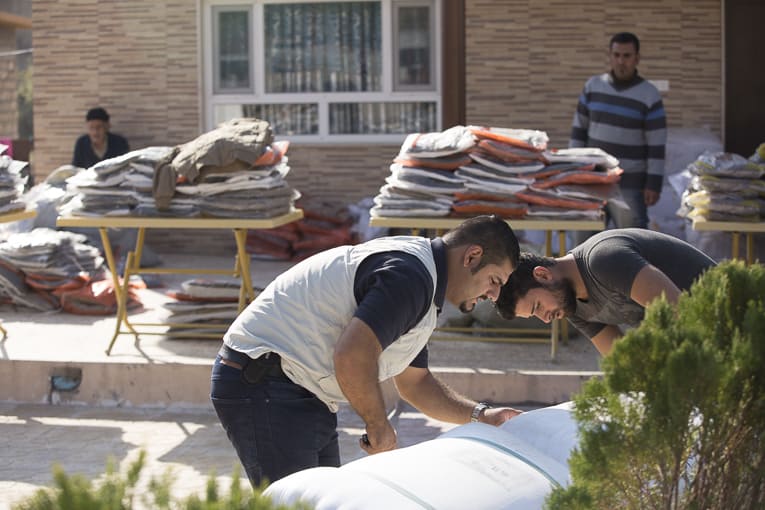 Local staff and partners prepare for a clothing distribution near Dohuk.

Toward the end of our interview, Samir said something I found profound: “God is our source, a bank that is never finished.”

We can never drain God’s resources. He always gives more to His children. It’s this kind of faith that allows true believers in Iraq to persevere through persecution. May the worldwide church learn from them, and let us pray Maranatha, an Aramaic transliteration meaning, ‘Our Lord, come!’