He addressed a congregation of persecuted Christians, displaced families, and other Iraqis, sharing the hope found only in the Resurrection.

Franklin Graham preached Good News in Iraq on Easter Sunday. He reminded persecuted Christians that God loves us so much that He sent His Son to take on the sins of the world and thereby redeem His children.

Malath Baythoon, pastor of Christian Missionary Alliance in Erbil, invited Franklin Graham to address his church this Easter Sunday. Many members of the 200-person congregation were forced to flee their hometowns in 2014 when ISIS first took control of Mosul and surrounding areas. As Christians, their only chance of survival was to abandon their homes and run for safety. Many fled with less than an hour’s notice and have never returned. 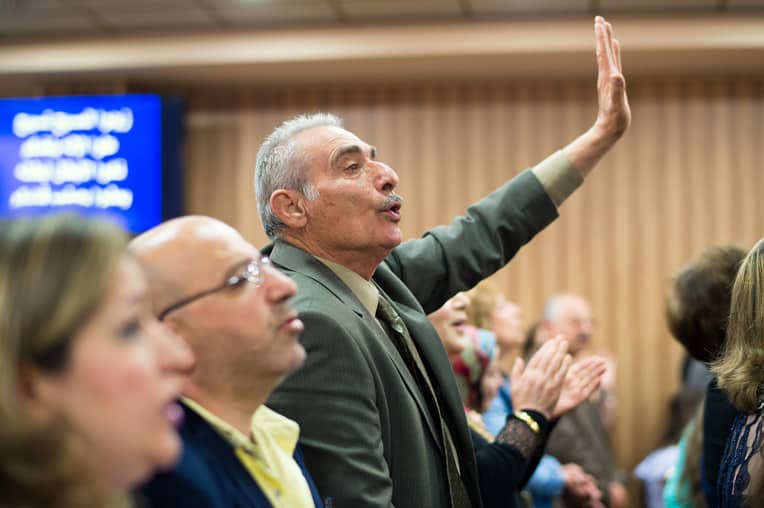 A church member worships our risen Savior on Easter Sunday in Iraq.

Just as many in attendance were persecuted by ISIS, Jesus was persecuted, but the story does not end there. Christians cling to the promise of eternity with Jesus Christ, because those who place their faith in Him serve a risen Savior.

“Today, we celebrate Easter, when our Lord rose from the grave. He is alive. He is not dead,” Graham said. “He is alive, and the only hope in this world is for God to change hearts, and the only way hearts can be changed is through Jesus Christ.”

Samaritan’s Purse plans to build a permanent church for Pastor Baythoon’s congregation, which currently overflows the sanctuary of the rented facility in which it meets. The Kurdish government recently gave Samaritan’s Purse a piece of property in Erbil, which will be used to build the new church as well as a community center. The community center will be used to minister to families displaced by ISIS.

Persecuted, But There Is Hope

On Good Friday, Franklin Graham, Greta Van Susteren—host of MSNBC’s “For the Record with Greta,” and Van Susteren’s husband, John Coale, visited Ashti camp, home to 1,200 displaced Christian families. In 2014, when ISIS took control of Mosul, these people were forced to flee from their hometowns or be killed. Three years later, these same families—made up of about 5,000 individuals—are still living in prefabricated units inside of a refugee camp in Erbil.

They have few resources and nowhere to go. Sister Diana, who manages the camp and was also displaced, said, “They have not seen a thread of hope” and have no reason or desire to return to their destroyed homes. [The community center, mentioned above, will be able to serve these families.] 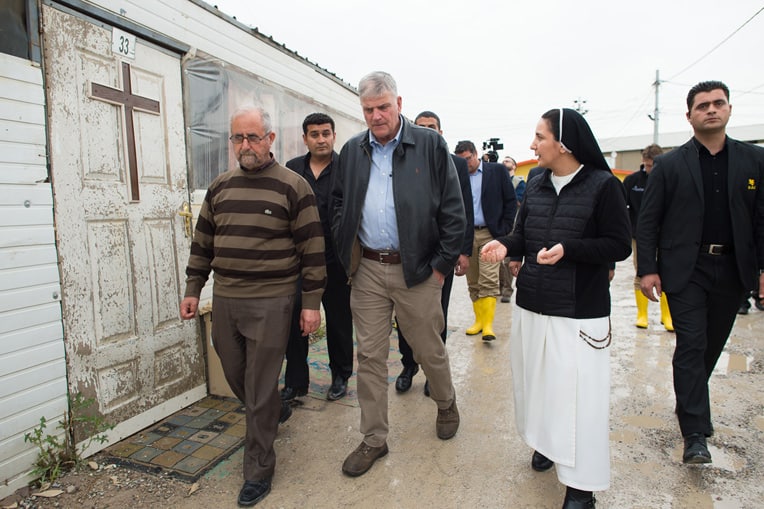 Franklin Graham walks alongside Sister Diana at a camp for Christians displaced by ISIS.

The next day Graham, Van Susteren, and Coale went to Sister Diana’s hometown of Qaraqosh to see the devastation she described firsthand. Qaraqosh, a historically Christian town on the plains of Nineveh, is now in complete ruin. ISIS bombed, burned and looted the town—driving out the Christian families and destroying everything left behind. Formerly home to some 50,000 Christians, Qaraqosh is now eerily quiet.

Sister Diana’s church is charred and broken—the pulpit was used by ISIS for target practice, the Bibles have been burned, and cross destroyed. Graham expressed that his heart goes out to pastors of the Middle East whose congregations are now dispersed from war and unrest.

“There is so much need, but Jesus said we will always have hope,” Graham said, “We are not able to help everyone in life, but we can help those that God brings across our paths.” 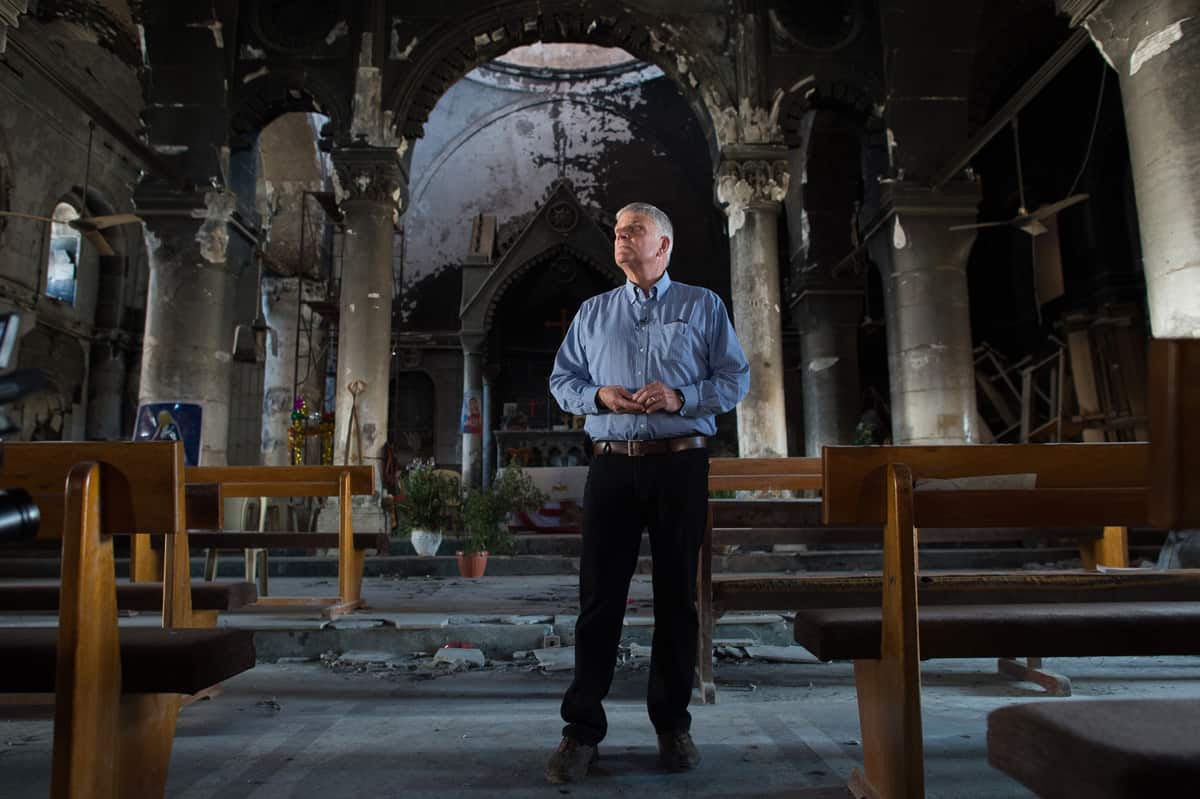 Franklin Graham stands inside a church destroyed by ISIS in Qaraqosh, a traditional Christian village outside of Mosul, Iraq.

One way Samaritan’s Purse is helping those in need is through the emergency field hospital. Located just outside of Mosul, the 54-bed trauma hospital gives medical staff the ability to provide lifesaving care to victims of war. 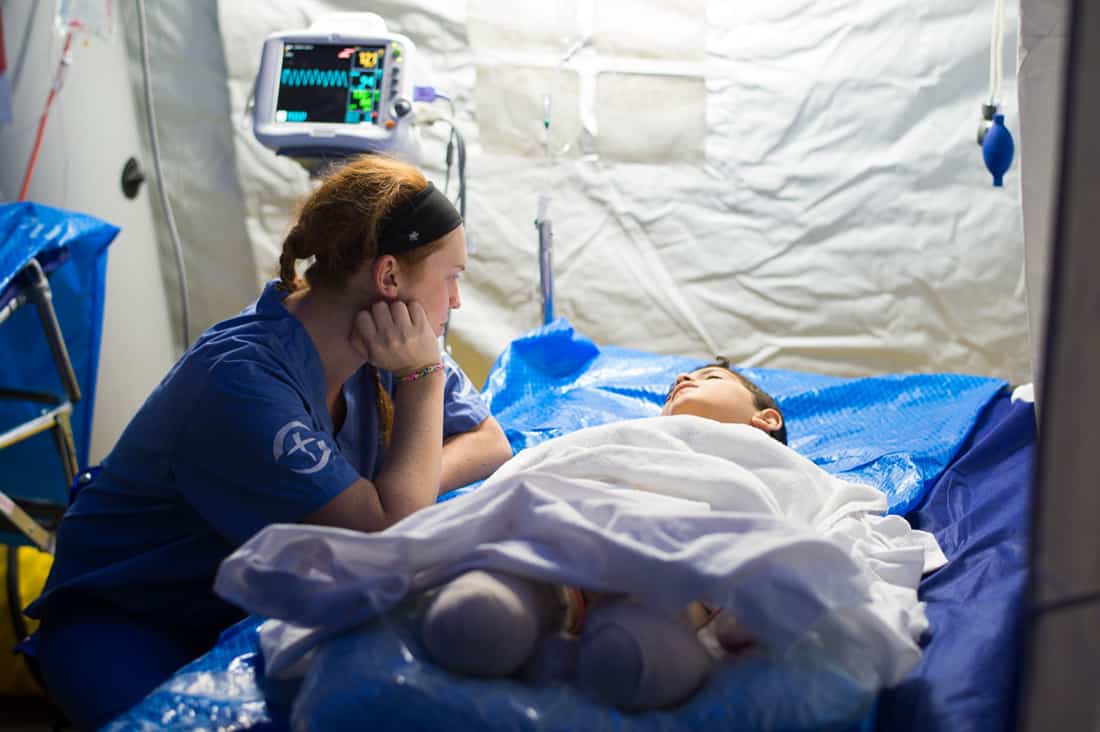 Our medical team is caring for patients severely injured in the conflict between Iraqi security forces and ISIS in Mosul. This seven-year-old boy lost his feet due to a mortar blast that hit while he played soccer with his friends.

The field hospital has been operational since early January, and doctors have already treated more than 1,250 patients and performed more than 650 major surgeries. Roughly 40% of patients are women and children, injured in a war they were not fighting in.

Last week, doctors treated a little girl who was shot in the back by a sniper, a 7-year-old boy who lost both of his feet in a mortar blast that struck the soccer field he was playing in, and a pregnant mother of four who suffered severe shrapnel wounds from an explosion. Heartbreaking stories like these are common at the emergency field hospital.

Dr. Kent Brantly, who contracted Ebola Virus Disease in 2014 while fighting the outbreak with Samaritan’s Purse in Liberia, is now serving at the hospital for a few weeks. He said his almost fatal experience with Ebola prepared him to be on the frontlines of treating patients from the war in Mosul.

Dr. Kent Brantly (at left) treats a patient at the emergency field hospital outside of Mosul.

Dr. Brantly’s fight against Ebola has allowed him the opportunity to connect with patients in Iraq. He explains that God’s purpose is greater than we can understand. “God saved my life, and has allowed me to be here taking care of you.” he tells his patients. “He doesn’t promise us that we will always get better, but He promises He will always be with us.”

Every patient at the emergency field hospital experiences a firsthand glimpse of the love, grace, and compassion of Jesus Christ through the care and treatment of dozens of Christian staff and medical workers. Each patient is prayed over and receives high-quality medical services. 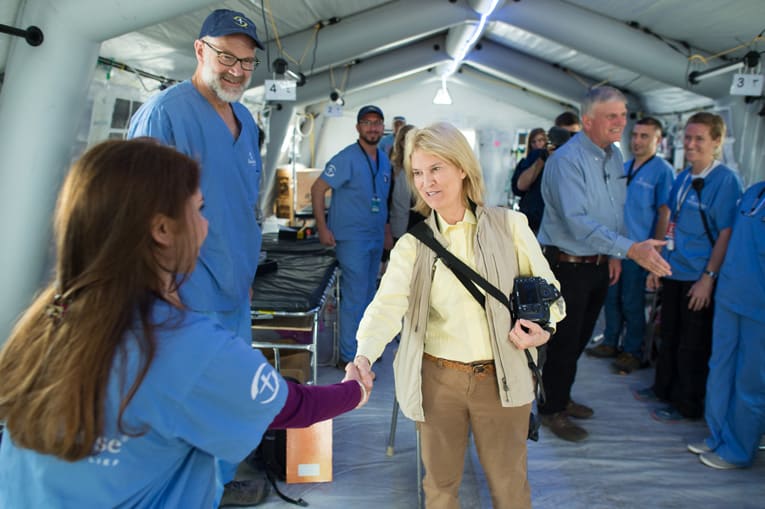 Greta Van Susteren and Franklin Graham greet our staff at the emergency field hospital outside Mosul.

Observing Easter in Iraq is a reminder that the suffering and persecution Christians face in this world are only temporary.

“We celebrate the risen Lord,” Graham said. “The Lord Jesus Christ is not dead—He is alive, and He can come into each and every heart that is willing to invite him. The only hope in this world is Christ.”

Samaritan's Purse is ready to respond at a moment’s notice whenever and wherever disaster strikes. We specialize in meeting critical needs for victims of conflict, natural disaster, famine, and epidemics throughout the world, often working through local ministry partners to do so. We provide emergency food, water, shelter, medical care, and other assistance in the Name of Jesus Christ.
Top Stories
Deploying an Emergency Field Hospital to Turkey
Franklin Graham Visits War-Torn Ukraine with 200 Millionth Shoebox Gift
Planting Seeds of Faith in Famine-Scarred Niger
Safe Water Comes to Remote Villages in Kenya
Makenna's Story of Hope
© Copyright 2023 Samaritan's Purse Canada. All rights reserved.