Extending a hand of friendship at Yalakot 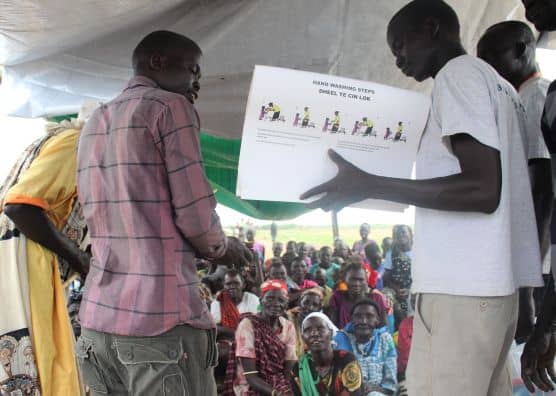 Victims of terrible violence in South Sudan learn they can trust Samaritan’s Purse to offer help and hope in the midst of their suffering.

September, 2014— Yalakot is a fishing settlement on the shore of the Nile River. The path leading to the village looks abandoned and quite narrow. Driving down it, you would be very lucky to find a person on the road.

On our first visit, we reached the village and couldn’t see anyone. As we walked further down the narrow, winding road, a tall man appeared from the bush. He had a tough face but looked terrified. We introduced ourselves as aid workers from Samaritan’s Purse, a Christian international relief organization that helps people who are in need. He introduced himself as the Sultan, chief of the community, and welcomed us.

He told us to wait so he could call other people who had taken cover in the thickets with their families. A multitude of people slowly emerged from the bush and told us they were hiding when they heard the vehicle coming. They were afraid of another attack like the one that killed some of their people a week before.

The five chiefs in the village told us that approximately 1,800 people in the camp had fled the town of Bor when the fighting escalated. They  used small canoes to cross the Nile River to find a safe haven. “Many of our people died on the journey as we struggled to cross the river. We had to run for our lives and we left everything behind,” said Mayuola, the Sultan, “only to reach here and we are attacked again. We don’t know where to go. For now we leave everything in God’s hands,” he added.

Together with the chiefs we visited  areas where many people were settled, but some were hesitant to show us all of their hideouts where the children were staying. We reassured them that we were there to help and we didn’t mean any harm. We found people settled in the bushes with their families, in pockets of 50 people without shelter, food, clean water, clothing, access to medication and very poor hygiene conditions. We could see from the faces of the children and their mothers that they had spent days without food.

Our help is accepted

After being briefed  about our program, the chiefs welcomed the idea wholeheartedly. We started hygiene promotion campaigns and brought a supply of clean drinking water. In addition, we built  200 emergency latrines and 100 bathing shelters for the people.

“Thanks for treating us with dignity. Your arrival makes us feel that we are not alone and you have given us knowledge on how to maintain good hygiene and sanitation. Our children are not falling sick as frequently as they used to,” said Mayen, a community health promoter. “It is our wish that we get more assistance in order to access basic necessities. We are desperate and we need help.”

Samaritan’s Purse has continued to support this community over the past six months and they are no longer afraid to come out of their hideouts each time we arrive. While they are still in need of assistance, their critical needs have been met.