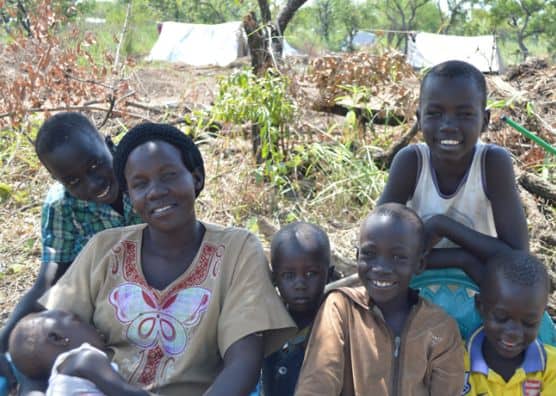 The increasingly violent conflict in South Sudan has driven a dramatic increase in the number of refugees seeking safety in Uganda, where Samaritan's Purse is providing much-needed emergency water.

Chaos currently reigns in South Sudan. The conflict that started in December 2013 between various government officials, and re-erupted in July 2016, has continued to fuel a civil war that has divided the country. Though some of the initial fighting was mainly isolated to a few geographical areas, new regions of the country are increasingly threatened by the violence that has engulfed the country. 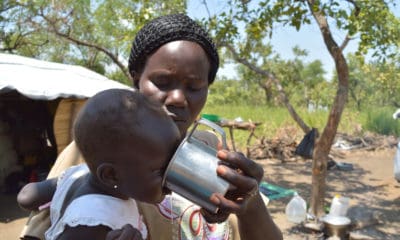 Betty provides one of her children with fresh water from a safe water tank built by Samaritan’s Purse.

Families looking to escape the fighting are making the long, dangerous journey to Uganda in order to find safety. Thousands arrive every day.

There are now more than 1 million South Sudanese citizens living outside South Sudan, a distinction shared only with Iraq, Syria, Afghanistan, and Somalia. Currently, there are over 600,000 South Sudanese refugees living in Uganda, with more than 400,000 of those arriving in the last months of 2016.

A quarter of a million of the recent refugees are now living in the newly formed Bidibidi Resettlement Camp. Established in August  2016, Bidibidi is already one of the world’s largest refugee resettlement camps with more than 250,000 men, women, and children taking shelter.

Many walk for days or weeks in order to reach the relative safety of the camp after living in fear for months. Those who arrive report extreme violence, extortion, forced recruitment, looting, attacks on homes, inflation, and the rising cost of living as reasons for leaving.

“When war broke out, I could hear gunshots everywhere,” said Betty, a 30-year-old mother of six who fled South Sudan with her family. “People were shot.” They now live in Bidibidi resettlement camp in northern Uganda.

Robbed of their money and some utensils as they fled the war-torn country, Betty and her family walked for days in order to reach the border. She came through better than many. Some of her neighbors were killed.

When her family arrived at Bidibidi, they received a plot of land to cultivate from the Ugandan government. Since her arrival, Samaritan’s Purse has been working with Betty and her family to develop safe water and hygiene practices.

“Some staff from Samaritan’s Purse came over to my tent and told me about keeping myself, my children, and home clean,” Betty said. “I was told how to use the hand washing facility. The water I use to wash my hands is treated to kill germs. I feel safe washing my hands with clean water. I also have safe water to drink and cook my food.” 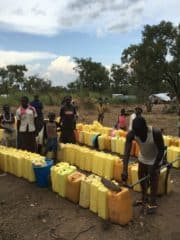 Families line up their jerry cans waiting for water.

Though the family has received assistance and feels safe, opportunities for work are limited.

“Five days after settling here, my husband went back to South Sudan to find work,” she said. “He risks his life for us so that we can survive”

In addition to assisting with clean water and hygiene, Samaritan’s Purse has also provided livelihoods training and seed distributions to 22,500 vulnerable families. But the needs of the camp continue to grow as thousands of new refugees arrive every day.

Water remains the largest concern. Most people are receiving only half of the water that they need for daily tasks like personal hygiene and drinking. Officials continue to truck in water daily, but it’s still not enough to serve a population of this size.

Samaritan’s Purse is helping by building 15 new boreholes, which are deep, narrow wells that extract water from underground stores and bring them to the surface through use of an electric or hand pump.

As Bidibidi reaches capacity and another refugee camp opens, the ability of authorities to house, feed, clothe, and educate the ever-growing number of people becomes more challenging. But for those who have arrived, the opportunity to live without the threat of violence is worth the sacrifices.

“When I go to sleep, I do not hear gunshots and nobody attacks or disturbs me at night,” Betty said. “When I look back to the war and how I ran with my family from South Sudan, the situation is better now.”