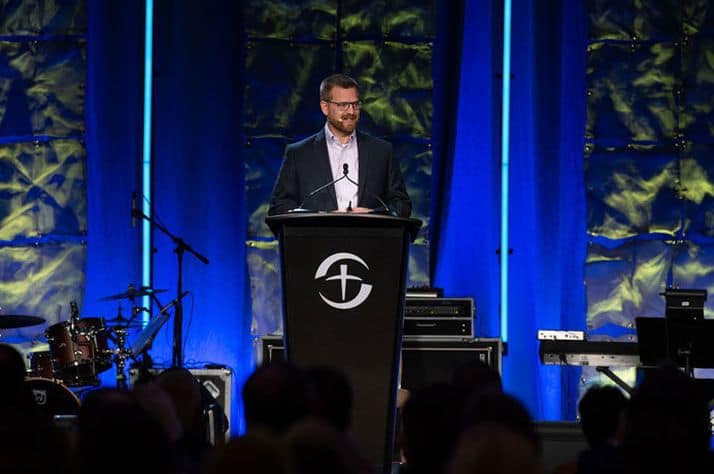 Dr. Kent Brantly remembers the day in June 2014 when he and a nurse’s aide donned protective gear and walked toward the ambulance to receive the first two Ebola patients at ELWA Hospital’s isolation unit in Liberia.

Although terrified, the men chose to have compassion on them because they were their “neighbors in need.” A month later, Brantly found himself in the same life-or-death battle against the dreaded virus.

Addressing the largest gathering ever at Prescription for Renewal, the young physician who served in World Medical Mission’s Post-Residency Program thanked Samaritan’s Purse for “going to all lengths to do whatever you could to take care of me when I needed it the most.” His challenge to the audience to choose “compassion over fear” became a rallying cry throughout the four-day event, held Sept. 19-22 in Orlando, Florida. 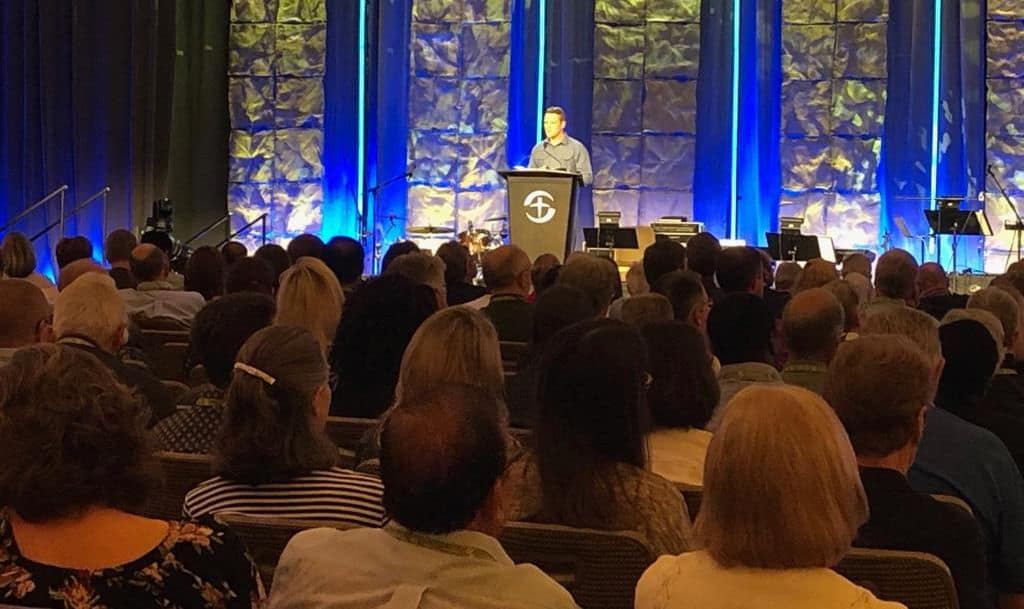 Canadian Medical Response Coordinator John Troke shared about what it was like to offer physical healing and the hope of Christ to victims of war and natural disasters around the globe.

“Ebola highlighted the interconnectedness of our world, and the fact that a bad thing happening on the other side of the world is really not so far away from us,” he said. “We can make choices based on fear, or we can choose to act out of compassion.”

After a five-year stint in the United States, Brantly and his family will be returning overseas in a few weeks to begin full-time service at Mukinge Mission Hospital in Zambia. They will be joined by Brantly’s cousin, Dr. Stephen Snell, who served at the hospital for two years as a Post-Resident.

“The command to love your neighbor as yourself is a command to care for those in need, whoever they might be, to lift them out of the ditch and tend to their wounds. We are all called to be Good Samaritans,” Brantly said.

This year’s conference drew attendees from across the United States, Canada, as well as other nations, including many who were first-time participants. Most were medical professionals who have served on the mission field. Others came to learn how they might use their skills for God’s glory through a variety of medical ministries of Samaritan’s Purse.

The decision to move Prescription for Renewal to a large venue in Florida made it possible to accept more registrants and to offer significantly more continuing medical education lectures, a staple of the conference. For 29 years, the event was held at the Billy Graham Training Center at The Cove near Asheville, North Carolina.

Featured for the first time at Prescription for Renewal were displays of our Emergency Field Hospital and the Ebola Treatment Unit, similar to tent setups that have been called into service in the Bahamas and the Democratic Republic of the Congo. Guided tours were led by Samaritan’s Purse workers who shared their personal experiences about the demands, dangers, and rewards of serving on the frontlines of a medical crisis.

Mike Huckabee kicked off the conference Thursday evening with a mix of homespun humor and sage advice. The former Arkansas governor and host of the popular TBN talk show “Huckabee” praised Samaritan’s Purse staff for their dedication and sacrifice as they serve in difficult places around the globe. Earlier that day he toured the replica emergency field hospital and Ebola treatment unit. 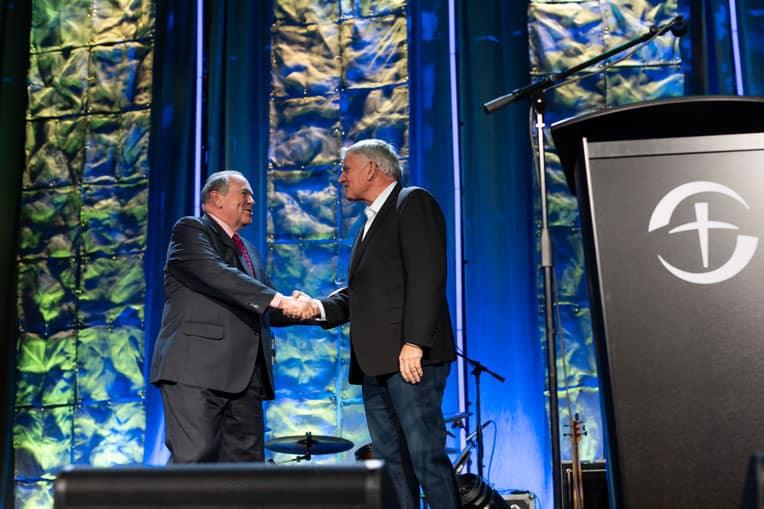 “It really wasn’t the equipment that knocked my socks off. It was the people,” he explained. “These are people who truly have put their lives on the line for Jesus.”

When his family went through a frightening health crisis many years ago, Huckabee recalled how much it meant to him to receive tangible expressions of kindness. He sees that same compassion lived out loud by Samaritan’s Purse medical personnel.

“At the end of life when the Lord says, ‘well done, good and faithful servant,’ that will mean everything,” Huckabee continued. “And there are many of you sitting here in front of me who I am convinced will hear with enthusiasm these words from the Lord.”

’Your Faith Is Your Strength’

As a former governor of South Carolina and, most recently, the U.S. ambassador to the United Nations, Nikki Haley has seen up close the unflagging commitment of Samaritan’s Purse to meet the physical and spiritual needs of suffering people.

Saturday night’s keynote speaker voiced deep gratitude to the organization’s staff and volunteers who responded to her state’s devastating floods associated with Hurricane Joaquin in October 2015. 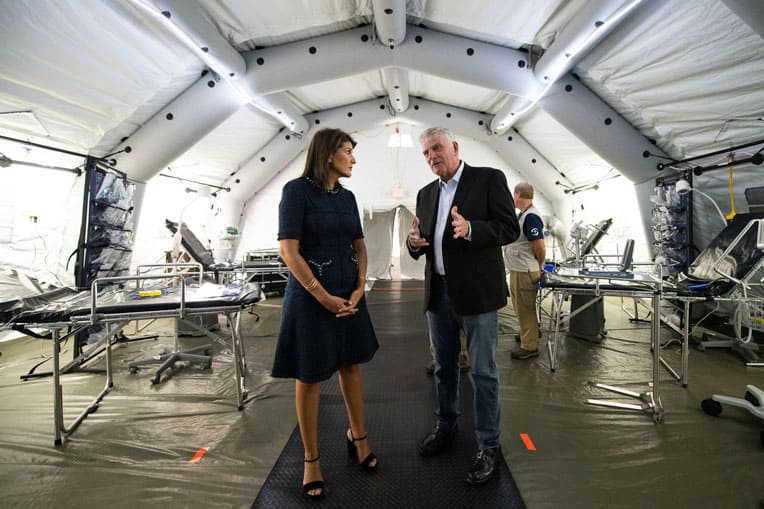 “Samaritan’s Purse showed up, you stayed even after the television cameras left, and you promised me you wouldn’t leave as long as there were people to be helped and work that needed to be done,” she told the audience. “I’m here tonight because you kept your word. I will be forever grateful for what Samaritan’s Purse did to help my state.”

The paths of Haley and Samaritan’s Purse have crossed internationally too, and she noted in particular our work in countries like South Sudan and the Democratic Republic of the Congo where we have injected hope in the midst of great despair.

“What you do is make miracles happen in people’s lives. You do the things that the United Nations and no government could ever do—you heal souls as well as alleviate suffering,” she said.

Commenting on the growing problem of divisiveness within the United States, Haley added: “At a time when it feels like we are being pulled farther apart as Americans, when so many are focused on our differences rather than what unites us, your organization models the true meaning of tolerance and diversity.

“Your faith is your strength. It is the very thing that moves you to serve people irrespective of their race, religion, or nationality,” Haley said.

“Your faith is your strength. It is the very thing that moves you to serve people irrespective of their race, religion, or nationality.”—Ambassador Nikki Haley

Honoring the Life of a Good Samaritan

Aileen Coleman, a medical missionary who has served the Bedouins in Jordan for 64 years, was honored with the 2019 “In the Footsteps of the Great Physician” award. Noting the influence Coleman has had on his life, Samaritan’s Purse President Franklin Graham presented her with the plaque and a Good Samaritan bronze sculpture. 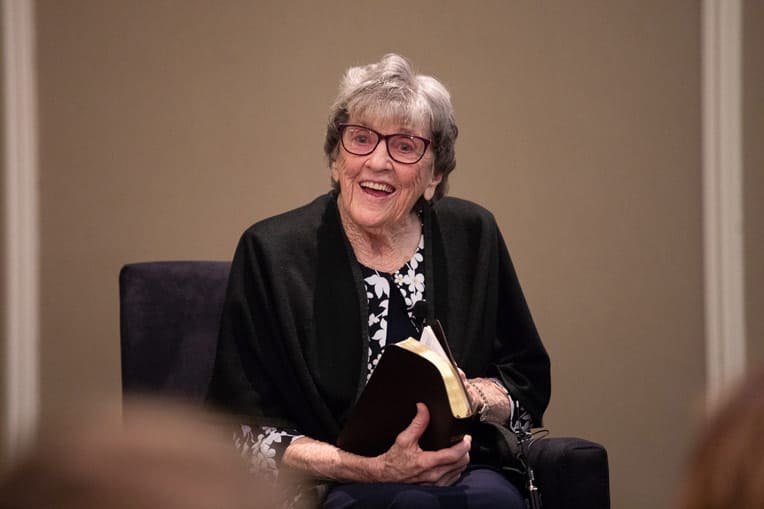 Aileen Coleman speaks at the Prescription for Renewal conference.

He told the audience that Coleman was instrumental in helping him as a wayward young man to give his life to Christ. “God used Aileen to have an impact on an 18-year-old who was drifting, who didn’t really know where God was leading him.”

A short video was played celebrating her work in Jordan with commentary from long-time friends and co-workers.

“Aileen, that’s what you have been all of your life—a Good Samaritan,” Graham said. “You’re 89 years old and you haven’t quit yet.”

The “In the Footsteps” award recognizes medical missionaries who have dedicated their lives to sharing the love of Jesus Christ in a spirit of selflessness and humility.

Central to the purpose of Prescription for Renewal is the emphasis on spiritual enrichment and Biblical instruction. This year’s Bible teacher was Skip Heitzig, founder and senior pastor of Calvary of Albuquerque, a Calvary Chapel fellowship based in New Mexico. 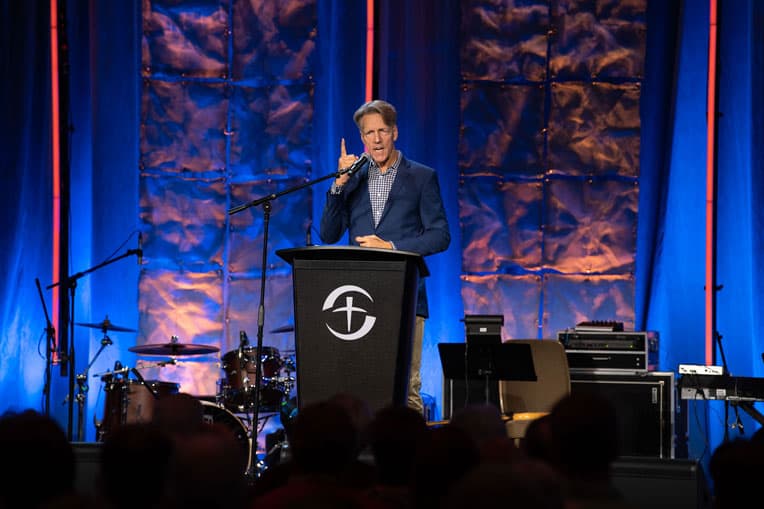 Skip Heitzig, pastor of Calvary Chapel in Albuquerque, speaks to medical professionals at the Prescription for Renewal conference.

Heitzig spoke on the themes of faith, hope, and love, encouraging missionary doctors to “love a person enough to give them the Gospel. Tell them the truth. Care for their soul. Be honest about their spiritual as well as their physical condition.”

The Tommy Coomes Band and Dennis Agajanian led praise and worship for the conference. Franklin Graham ended the event with a time of prayer and encouraged medical professionals to be open to opportunities to serve in overseas mission hospitals.

“Jesus loves broken people. In so much of the work that we do, we are reaching out to a broken world. In a mission hospital, we can be those hands in the hands of our Lord, touching a world that is out of control, a world that is full of people who don’t know where to turn or what to do,” Graham said.

“Each and every one of us can play a part. All of us can do something,” he urged the audience.

The 2020 Prescription for Renewal conference will return to the Renaissance Orlando at SeaWorld in Orlando, Florida, Sept. 24-27.