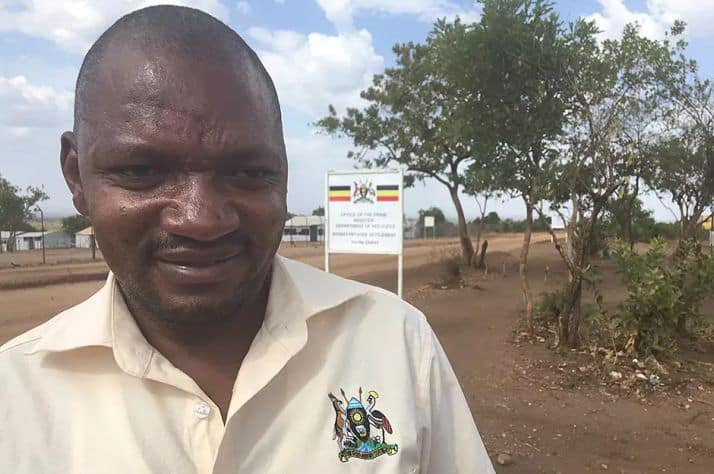 After years of crisis before and since the civil war, NGOs say there is a 'compassion fatigue' when it comes to aid and support for the African nation

PURE, South Sudan — Kalashnikov rifles in hand, three soldiers from the South Sudan Liberation Army languished in the shade of a tree in this sleepy hamlet near the Ugandan border, relieved to be away from one of the bloodiest, least well known conflicts on a continent where there are too many of them. As the soldiers rested a slow trickle of refugees seeking sanctuary in Uganda made their way down a dusty dirt track and around a frayed rope tied to a tree that served as an unofficial border.

“We are fearing, especially at night,” said Marguerite Kuyunge, not long after she had crossed over into Uganda after a perilous one-week journey on foot with her seven-year-old son and four-year-old daughter.

“When you see danger you try to get ahead of it instead of letting it get you where you are,” the 27-year-old woman said.

Recounting a story heard again and again in South Sudan and Uganda, Kuyunge said that her husband had been captured by one of the factions — she did not know which — and that there had been no information about what happened to him since then.

It had been a harrowing journey to reach Uganda during which “we would see bodies and would try to hide,” she said. “Rebel soldiers found us and told us to move on. We used small paths in the bush so that they would not know where we were.”

Since last August, about 1.8-million South Sudanese have fled abroad. More than half of them ended up in Uganda. Large numbers have also shown up in Sudan, Ethiopia, Kenya and the Democratic Republic of Congo. A further two million more South Sudanese are internally displaced — that is, forced from their homes and still inside the country, living in camps or trying to fend for themselves.

Many of the women arriving in Uganda have been victims of sexual violence and other forms of abuse and intimidation in South Sudan. According to the UN, about two million of those on the run inside South Sudan or temporarily settled in neighboring countries are children, many of them are orphans.

Small wonder, then, that the UN declared earlier this year that the civil war in South Sudan has created the world’s greatest humanitarian crisis. A spokesman for the UN in South Sudan reckons that as many as 50,000 South Sudanese have died in the tribal fighting between President Salva Kiir’s Dinkas and his former aide Riek Machar’s Nuers that began 100 kilometres north of Pure in the capital, Juba, two years ago and quickly spread across the country despite a peace agreement between the warring parties. 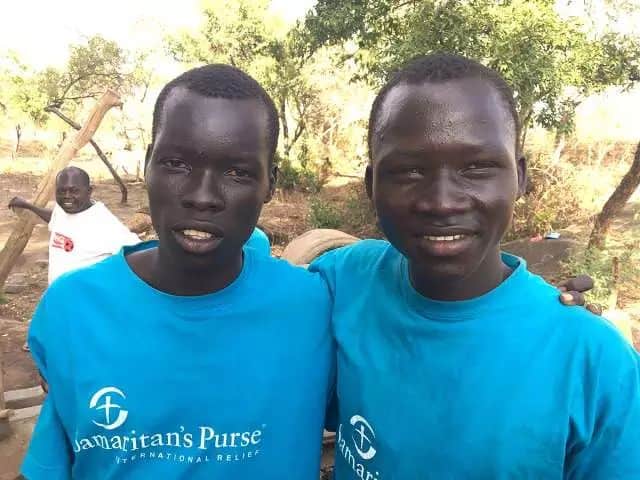 “Water is everything because it serves us to drink, to cook, to bathe and to lay bricks,” said 16 year old Robert Djara John (right), who aspires to become a doctor. John helps to oversee one of Calgary-based Samaritan’s Purse’s wells that provide water to some of the one million South Sudanese refugees in Canada. Traveling alone, John zigzagged by foot for two weeks across South Sudan before finding sanctuary in South Sudan. As for his family: “Honestly, I don’t think that I will ever see them again.” Matthew Fisher / Postmedia News

As so often happens in Africa, famine followed war. Part of the blame was a drought. But another factor was that people became too afraid to plant or harvest their crops and because the two sides would often not let food aid through.

Despite its own grinding poverty, Uganda has continued to welcome everyone from South Sudan who shows up at is border. This remarkable show of goodwill in an impoverished country with plenty problems of its own stands in stark contrast to how European countries, as well as Canada and the United States, have limited the number of refugees they have taken from the Middle East and Africa.

Canada’s International Development Minister, Marie-Claude Bibeau, announced an additional contribution of $86 million during a visit to South Sudan this week. That’s on top of the $36.9 million Canada gave to South Sudan in March.

“We are managing but there is a severe shortage of funding,” said Robert Baryamwesiga, commandant, or mayor of Bidi Bidi, whose population grew from zero last August to 272,000 today, making it the world’s largest refugee camp. 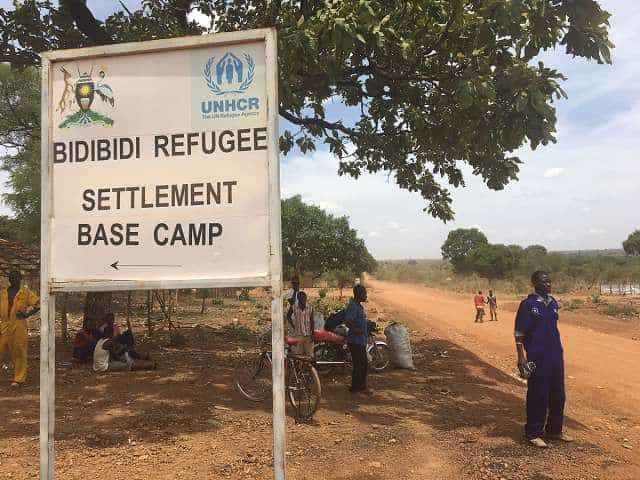 Last summer Bidibidi did not exist. It is now home to the world’s largest refugee camp, with 272,000 South Sudanese living within a sprawling, dusty landscape about 40 kilometres south of the South Sudan border. Matthew Fisher / Postmedia News

“We are only getting about 15 per cent of the funding we require. That is a serious gap that may drive us beyond the breaking point,” the lawyer and social scientist said. “This could force the government to examine its generosity at some point.”

Despite scenes of teeming masses of refugees registering with Ugandan authorities, forming long queues every day for food, water and vaccinations, getting the world’s attention has been difficult. The United States and Russia have been focused on Syria and Iraq. More than one million refugees and migrants from those conflicts have shown up in Europe, causing hearts there to become colder towards refugees from everywhere.

Moreover, China’s chief interest in Africa has been to exploit its natural resources to feed its economy. As a result, the convulsions in South Sudan, which only became a country by defeating Sudan in a war of independence five years ago, have received scant international attention.

Elyas Mohammed, who is a coordinator for the UN in Bidi Bidi, said the priority was to provide food, water and shelter to the refugees. Only after that will issues such as health and education for the huge numbers of children, and ways for refugees to earn a livelihood be considered. 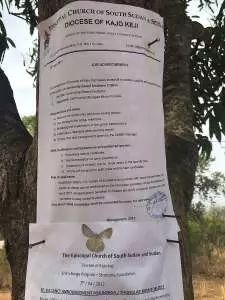 South Sudan is in the midst of a savage tribal civil war but the Episcopal Church still amazingly posts job advertisements on trees seeking a community based facilitator. Matthew Fisher / Postmedia News

“They arrive not having had food and water for weeks. That is what is mobilizing people to leave South Sudan,” Mohammed said.

Uganda had calculated it needs $400 million to run Bidi Bidi and a network of other refugee camps this year. Only $60 million has been pledged to the UN so far. And only $20 million of what has been pledged has actually been received.

“That is a drop in the ocean,” Baryamwesiga said. “There are refugees suffering in a poor country that has given everything that it can. And the world is walking away from us.”

There is a lot of “compassion fatigue,” said Dorothy de Vuyst, of Samaritan’s Purse, which sponsored Postmedia’s trip to Central Africa to see the South Sudanese humanitarian crisis.

Samaritan’s Purse is a Christian aid agency. Its Calgary-based chapter has spent $3 million on the East African crisis, with most of that money being spent in South Sudan and Uganda. Of that money, Ottawa provided $1.3 million for water and sanitation projects. The rest of the funding came from donors.

The charity provides a range of assistance to those fleeing the war. But its unglamorous niche has been to drill boreholes for water and dig family latrines so that large groups do not have to use the same facilities.

“This is not a one-day event,” de Vuyst said. “There is not the same feel as there was to the Haitian earthquake or the typhoon in the Philippines.

“It has been growing silently beyond the eyes of the world. And now the numbers have become very significant”

“It has been growing silently beyond the eyes of the world. And now the numbers have become very significant.”

Every hour or so, a few South Sudanese quietly pass through Pure on their way to UN camps in Uganda. As many as 3,000 others cross over every day using equally unofficial crossing points in the vast sand and scrublands dividing the two countries.

The arrivals are gathered up by bus on the Ugandan side and brought to refugee camps that form a belt about 40 kilometres south of the border. Most of the newcomers are thirsty, starving and deeply traumatized by the savagery they have witnessed along the way. 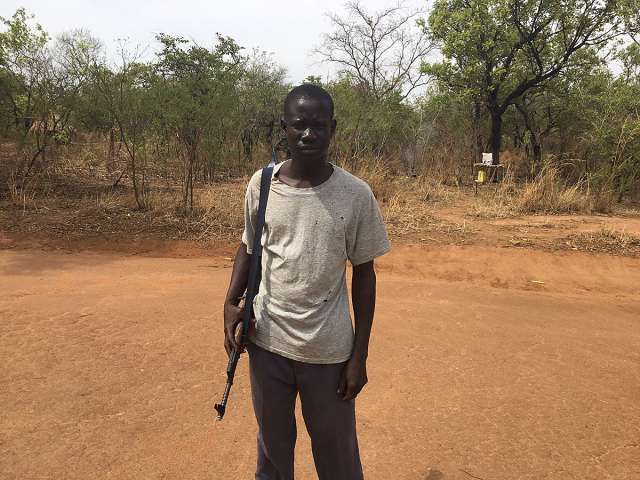 For all that, the refugees express jubilation at having found sanctuary and being given food and water. They express their joy with exuberant songs and frantic dances that are mesmerizing to witness.

“Water is everything because it serves us to drink, to cook, to bathe and to lay bricks,” said 16-year-old Robert Djara John, who aspires to become a doctor.

He lost his mother four years ago. Traveling alone, he zigzagged by foot for two weeks across South Sudan before reaching Uganda. He helps out with pumping for water at a borehole in Bidi Bidi installed by Samaritan’s Purse.

“If possible we all want to go home and find our families,” he said. “But I have no idea where they are. Honestly, I don’t think that I will ever see them again.”

It is something of a miracle that Uganda has managed to cope with the influx of South Sudanese. More miracles may be required. Another 400,000 refugees are expected here this year.

Bettina Baesch-Ssemwaka, who works in Samaritan’s Purse office in Kampala said: “The question really has become how many refugees can one country hold.”