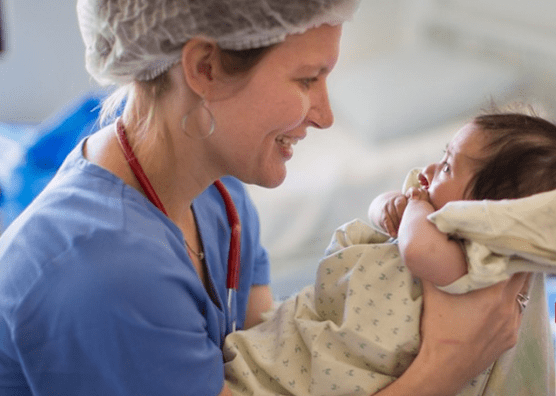 A Samaritan’s Purse team of medical and ministry personnel brought physical and spiritual healing to many in La Paz.

December, 2015—The Samaritan’s Purse Cleft Lip and Palate Project expanded from South Sudan into Bolivia in late October, performing 29 free-of-charge surgeries on patients ranging in age from just a few months  to 45 years.

Edson, 27, and his mother Modesta were two of them. Edson, who had a cleft lip revision, is in his final year of technical school, studying to be an electrician. He grew up being made fun of by other children. It was hard to be different from everyone else.

Though classmates are kinder now, his pre-revision cleft lip was still an issue. He felt it might have been holding him back from better opportunities. “It’s still something I struggle with every day,” he said. “It feels like a little bit of an obstacle.”

In addition to Edson’s successful lip operation—performed by human hands—God did surgery on his heart by replacing a heart of stone with a new heart of flesh (see Ezekiel 36:26). As he talked with our ministry team before his surgery, he was convicted of his need to receive Christ.

“I’ve always trusted in God but today they showed me the right way I should go and how to grab hold of the Bible,” he said.

Our staff gave the young man and his mother new Bibles in Spanish along with other Christian literature. Edson made a quick post-op recovery, and our staff saw him diligently digging into the Word.

He later texted one of our staff the following message (translated from Spanish to English): “Thank you, thank you very much for making possible this gift of a new smile for us. May God always take care of you and bless you all. Thank you to all the doctors and the whole team for this.”

By God’s Grace, a Fantastic Week

Our medical team was uncertain how the week would play out, considering it was our first trip to Bolivia and the fact that the surgical cases were often quite different from our previous work in South Sudan. Nonetheless, by week’s end, everyone saw that God had once again provided.

“It’s been a fantastic week. There were so many things that were unknowns, we really went in faith,” said Karen Daniels, a registered nurse who leads the cleft lip and palate surgical teams for Samaritan’s Purse. “God has just been really gracious to us. It’s been exciting to watch it.

“The surgeries we’ve been doing have been quite different [from South Sudan]. There’s been a lot more revisions, a lot more palates cases, a lot more complex surgeries.”

Since 2011, our teams have performed 340 cleft surgeries in South Sudan. The results are often dramatic and make a huge difference in the patients’ lives. A repaired lip in South Sudan erases the stigma of being considered a curse and opens up better opportunities for employment, education, and marriage. However the surgeries are mostly cosmetic, and the patients may still struggle with great difficulties in speech and swallowing.

A number of the surgeries performed in Bolivia were palate repairs and related fistula closures, which are more difficult and time-consuming operations. (In this case, a fistula refers to a hole that has opened between the mouth and nose.) Though the change in appearance  is not as dramatic as a lip repair, with appropriate therapy, big improvements in eating, drinking and language  will follow.

“The palate has everything to do with speech and the ability to eat,” said surgeon Tom Boeve, a veteran of Samaritan’s Purse work in South Sudan who also traveled to Bolivia. “If [a patient] has a fistula, every time he eats and drinks something, it  comes up his nose. It makes him a social outcast and it’s miserable for him. So when it’s fixed and working fairly well, he can begin to develop better speech  function in society very well.”

Two-year-old Ana was among those who had a fistula closed during our Bolivia trip.

“I have to clean her face every second,” said her mother Sandusa before the operation. Because of the gap from the roof of Ana’s mouth to her nasal cavity, liquids would leak through her nose while drinking—a daily, painful experience that is now a thing of the past.

Sandusa, 38, understands her daughter’s pain as she too had a cleft lip repaired at age 13. When little Ana was born, Sandusa, a Christian believer, said she told the Lord, “You blessed me, but what about my daughter?” The Samaritan’s Purse medical team was glad to be a part of God’s healing answer to that question while in Bolivia.

“It’s a huge joy that you have come so far to bless the children of Bolivia,” Pastor David Archondo told one of our surgeons. Pastor David, himself born with a complicated cleft lip and palate,  served on our ministry team in La Paz.

More to Be Done

There’s plenty of work too be done in Bolivia. Amalia brought her  six-month-old daughter Ashly, to La Paz for her first cleft surgery. Our medical team repaired her cleft lip, but her cleft palate still requires surgery.

When Ashly was born, Amalia was scared  and thought about abandoning her. Her husband encouraged her with the assurance that they would find a way to get the surgery their little one needed. That opportunity finally came thanks to Samaritan’s Purse.

When Amalia’s husband dropped them  at the clinic, he was crying. “I believe they were tears of joy,” Amalia said. In the past, hospitals would tell them to wait, Ashly was not ready. “He could not believe this was her time.”

Before Ashly’s surgery, Amalia said: “It would have been a great mistake to abandon her. I’m going to fight for her, whatever it takes for her to be a normal person.”

Post-surgery, Amalia was pleased and excited, “Even right now I can see the difference—how she looks like another baby.”

But the 30-year-old mother of four knows the journey is not over.

“I want you to come again,” she said. “Please come back soon. I feel relieved, but I know I have some way to go. I will keep fighting until she gets everything repaired. Then I will be totally happy.”

Next year Samaritan’s Purse plans to return to South Sudan and Bolivia to perform more cleft lip and palate surgeries. Please continue to pray for the physical and spiritual health of our patients. Pray also for our staff and medical volunteers as they arrange the challenging logistics surrounding this project.