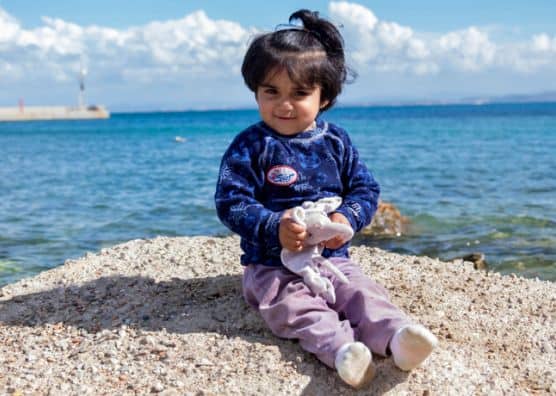 Amy Kuhl is the information officer for Samaritan’s Purse in Greece.

May, 2016—I watched as the pile of yellow wildflowers on the distribution table grew. Gabie, a Macedonian-Greek Samaritan’s Purse distribution staff member at Souda Refugee Camp, bent down to take each new bouquet carried over to her. She admired the fistfuls of flowers and exclaimed her thanks. The refugee children would giggle and smile and then run off to pick more bouquets from the mess of flowers growing along the chain-link fence separating the row of white Ikea-designed refugee housing units from the ninth century Chios Castle.

“This is my day every day,” Gabie told me. 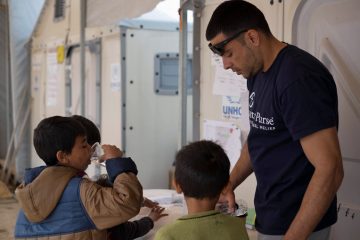 Souda, where Gabie works, is one of several camps on the Greek island of Chios. It sits four miles off the coast of Turkey and has served as one of the main points of entry into Europe for refugees escaping ongoing conflict in the Middle East. In February, the average number of refugees arriving on Chios each day was 480.

Samaritan’s Purse began operating on the island this past October, but for Gabie and others who call Chios home, the reality of the refugee crisis started long before October and long before transit centers and camps were in place.

“In the start, I didn’t know anything about this [refugee response],” Gabie said. “I’d never heard of Samaritan’s Purse.”

Like the rest of the islanders, though, Gabie was aware of the refugee crisis. Chios residents have watched for months as refugees have come flooding to the island on their way to safety. Some islanders have had refugees literally land in their front yards. They’ve seen firsthand the devastation and fear that turns to relief when a refugee finally reaches the shore of Chios after a dangerous crossing of the Aegean Sea.

“I was here since the beginning, even when we didn’t know what to do because so many people were coming,” Gabie said. “When I came across Samaritan’s Purse for the first time and saw people wanting to help, I said ‘I’m in!'”

As we sat talking, the steady stream of flowers into the distribution area continued. Another group of children sat nearby playing with puppies that a Samaritan’s Purse staff member found and adopted as the Souda Camp therapy dogs. After experiencing immense amounts of hardship and hostility along the journey from their home countries to the safety of Europe, it’s a relief for kids to have the freedom to be kids again.

“It’s pretty good when you can see the smiles on people’s faces,” Gabie said. “It just melts your heart! Like her. See?” Gabie nodded her head toward a small girl with wisps of hair flying.

The girl stood leaning over the metal railing into the distribution area holding yet another bunch of flowers. She waited, arm outstretched, until Gabie came to collect the flowers. There seemed to be no end to the flow of bouquets into the distribution area. Gabie had the special talent of making each child feel like the bouquet they brought her was truly valued and beautiful. To her, that is what they were.