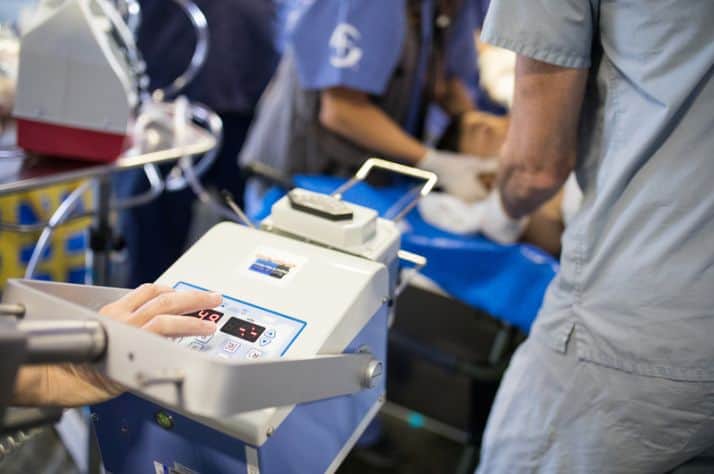 A nurse from eastern Ontario shares about her experience from the frontlines from the emergency field hospital in Iraq.

As an emergency room nurse in eastern Ontario, Monique* regularly treats strokes, heart attacks and injuries from accidents. None of that prepared her for working in Samaritan’s Purse’s emergency field hospital near the embattled Iraqi city of Mosul.

“I saw way more death in the field hospital,” the Quebec resident shared. “The stark contrast was children were dying as a result of evil.”

Monique spent a month in the field hospital, which is just 20 kilometers from where Iraqi government forces are battling ISIS terrorists for control of the ancient city of Mosul.

Thanks to the prayers and donations from generous Canadians, Samaritan’s Purse, at the request of the Iraqi government, was able to deploy and continuously staff the hospital to treat those trying to escape the fighting.

So far, Samaritan’s Purse doctors and nurses have treated more than 800 patients, many of them women and children who have been seriously injured.

In one instance, Monique treated a six-year-old girl who had a serious mortar wound to her head. She and other staffers worked furiously to save her, even as she repeatedly vomited blood.

“As I looked at this little lady, surrounded in her own bright, red fluids, I felt my hope letting go and knew that this is where the toughest decision had to be made,” Monique wrote in her daily blog. “With five other children in the trauma bay, and her unlikely to survive, how do we decide where to pour our resources and where to hope?”

The child’s life hung in the balance, even as Monique’s shift finally ended and she left the intensive care unit fighting to remain hopeful. Then a nurse walking past told her doctors had found a tear in one of the child’s arteries. They repaired it and she was now in stable condition.

“I turned around and headed straight for the ICU,” she wrote. “Her eyes were closed, and her chest rose and fell with the movement of the ventilator. Her thick, brown braid cradled her head on the blue pillow and was tied together at the ends with a pink barrette. I leaned over and kissed her cheek, risking it all to feel hopeful again.”

In another case, Monique was part of a team that treated a baby with a potentially fatal bullet wound. The baby’s mother was given a choice by ISIS soldiers: she could take her baby to a hospital for help, but she would have to leave her three other children behind. Or she could watch her baby die, but keep the other children with her.

“I don’t know how long it took for her to decide,” Monique wrote. “I don’t know the weight of a decision like that. I don’t know the strength that enabled to pick up her bleeding child, trust in higher being for the protection of her other three children, and run.”

Monique and the rest of the team was able to save the baby. The grateful mother “gathered her precious child in her arms and trekked back towards Mosul – hoping she would find her other three children, last seen in the hands of ISIS.”

As painful as these experiences were, Monique was glad to be part of them, and the team of people saving lives near Mosul in Jesus’ name.

“God equipped me for there, so that’s where I wanted to be,” she said back in Canada. “This is the reality for a lot of the world and we in North America are hidden from that.”

The Samaritan’s Purse emergency field hospital will continue treating patients until the battle for Mosul is finished. You can be part of this Kingdom work through your prayers and financial gifts. Please join us.