Calgary surgeon saves them all for the Lord 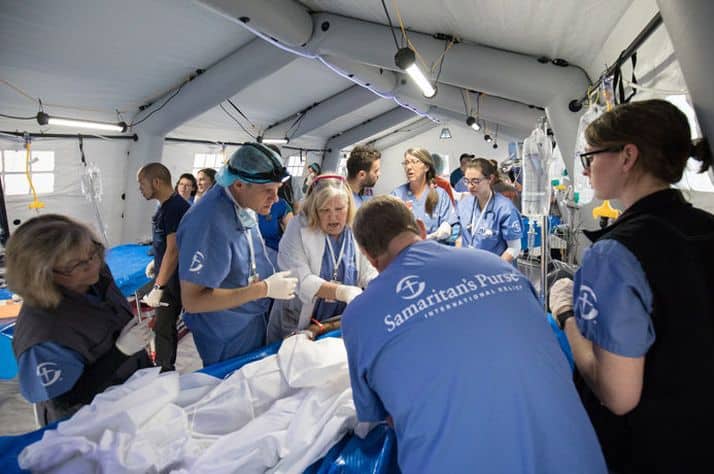 Calgary surgeon Jeff Way has a new take on an old saying: “Save them all and let God sort them out.”

That’s what he tried to do during a three week stint at a Samaritan’s Purse field hospital in the war-ravaged city of Mosul in northern Iraq.

And while Way couldn’t save all of the 100 men, women and children that were brought into the heavily defended tent hospital, the experienced surgeon saved enough and saw enough to reaffirm his faith in God.

Way, a trauma surgeon based out of Foothills Hospital, travelled to Mosul in February after Samaritan’s Purse successfully set up the field hospital on the outskirts of the city, which has seen horrendous fighting between Iraqi regular forces and supporters of the Islamic State terrorist group for many months.  Thousands have died in the battle, including many civilians caught between the warring factions.

Although the injured were segregated for security reasons into three groups at the hospital – Iraqi soldiers, women and children, and suspected enemy combatants – the level of care was the same for all.

The hospital was the only such active facility in the war zone and the injuries the medics had to deal with every day were horrific.

“All we saw all day long were victims of war – people who had been shot, injured by landmines, drone attacks, suicide bombers, car bombs – that’s what we dealt with.  It was major trauma and mutilated, shredded people,” he said.

While the field hospital was reasonably well equipped, its facilities paled in comparison to what Way operates with in Calgary, where Foothills Hospital hosts a top-of-the-line RAPTOR trauma suite.

“We had basic equipment and we were able to put people to sleep and operate and save many lives.  If Samaritan’s Purse had not been there, then these people, who were all mortally injured, would have succumbed, there is no doubt about that.

“Yes, and people died there and we might have been able to do something but we just didn’t have the resources available that we have in Calgary.  So tough decisions had to be made,” he said.

Before each operation, Way and the other surgeons would pray over the patient before starting the procedure.  He believes those prayers were answered many times.

“We would put you back together and pack your belly and leave it open so we could come back next day and take a look inside to see if we have to do any more work on you – it’s a common damage control technique.”

“So we brought these people back in, and after 24 hours the amount of healing that had taken place was amazing to us.  We never see that here.

“And all we had for pain management was Tylenol and Advil; we didn’t have a bunch of morphine or fentanyl.  Yet we managed people’s pain.  This is the power of the work of the Holy Spirit,” said Way, who grew up in a strongly Christian household in his native Newfoundland and recently completed his master’s degree in Christian Studies.

Mosul is the present-day site of the ancient city of Nineveh, the place where God told a reluctant Jonah to visit and preach.  That connection and Jonah’s biblical trial of faith was not lost on Way.

“If anything, my faith was strengthened.  God is there and doing work.  He doesn’t need us there, but he works through us to help him do his work.  We were called,” he added.

Helping in that calling was Way’s daughter, Emily, an ICU nurse in a Red Deer hospital.  She volunteered to work alongside her father.

“It was absolutely amazing seeing my daughter there and watching her work with limited resources, and see her compassion and care and skills,” he said.

The vast majority of patients were Muslim and many were shocked to see that the three surgeons helping them were North Americans.

“These people have been given this story of the West and how and what we are, so they were absolutely amazed we were there and caring for them.

“People did come to know God, absolutely.  We had local pastors who would talk to these people and, yes, they were Muslim, but they would ask us to pray for them.  They would initiate that,” added Way.

Samaritan’s Purse hopes to turn over the field hospital to local medical staff later this year.